California’s merchandise export trade concluded 2016 with an exceptionally strong showing in December, posting a nominal 9.3% gain over the same month in 2015, according to a Beacon Economics trade report released this week.

According to Beacon’s analysis of U.S. trade statistics by the U.S. Census Bureau, foreign shipments by California businesses totaled $14.04 billion for the month, a robust increase over the $12.85 billion recorded in December 2015. For the year, the state’s exports totaled $163.62 billion compared to $165.37 billion recorded one year earlier. 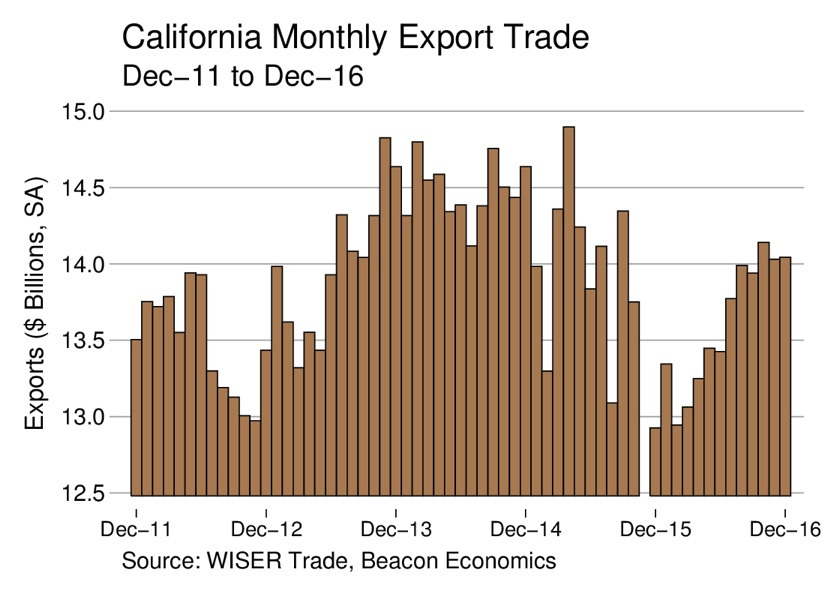 By way of comparison, the nominal value of overall U.S. merchandise exports in December rose 5.6%, while exports from Texas edged up 2.4% over last December.

For that reason, Beacon Economics compares the latest three months for which data are available (i.e., October–December) with the corresponding period one year earlier. That analysis shows that California’s merchandise exports totaled $43.66 billion, a $3.31 billion, or 8.2%, increase over the same time period last year.

The strong year-over-year growth in the fourth quarter of 2016 was due to broad-based gains across the state’s top commodities, as well as a rebound in oil prices that had been a drag on growth earlier in the year.

The largest gains were seen in miscellaneous manufactured commodities, which totaled $3.5 billion in the fourth quarter, a 20.9% increase over the fourth quarter of 2015.  This category is made up of a broad range of items and materials, one of them being jewelry, which was a major contributor to growth. Exports of precious metals, stones, and pearls totaled $1.62 billion, a 52.3% increase over the same time one year prior. The bulk of this increase was due to a real increase in volume and not just a change in prices. The average export price for precious metals, stones, and pearls increased by only 3.9% over the same time period. 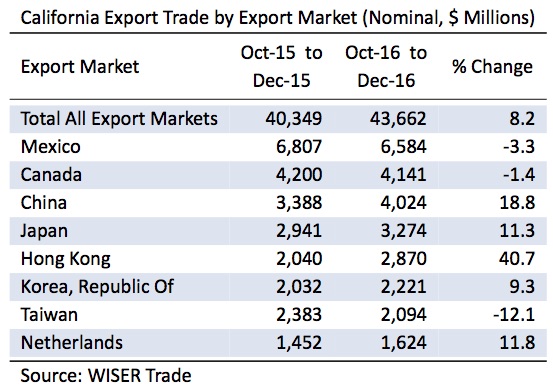 Exports of petroleum products were still a slight drag on export growth, but substantially less than in the first half of the year. Exports for this category totaled $825 million in the fourth quarter, down just 0.1% from the same time one year prior. This small decline was due to lower volumes of exports as average export prices rose by 7.7% over the time period. With crude oil in large supply globally, the volume of petroleum product exports is not expected to increase in the short term.

On a regional basis, exports to China made up the bulk of the increase in the value of exports in the fourth quarter. Exports to the mainland and Hong Kong together made up $6.9 billion, a 27.0% increase over the fourth quarter of 2015. Exports to Mexico, the No. 1 destination for the state’s exports by dollar value in 2016, as well as to Canada, the No. 2 destination, were both down over this period. The value of exports to Mexico and Canada decreased by 3.3% and 1.4%, respectively. 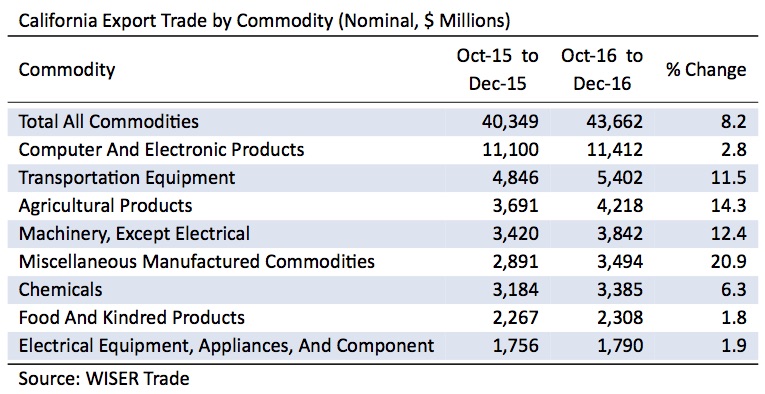 Beacon experts explain that President Donald Trump has questioned the benefits to the United States of the current global trading system and the rules that govern how business is to be done among nations. Upon taking office, the President promptly squashed any remaining hope that the Trans-Pacific Partnership (TPP) might be approved, although it should be noted that the accord was not expected to win approval in Congress regardless of who assumed the presidency on January 20. Implementation of TPP would have provided benefits for a wide range of California industries from farms to pharma.

“President Trump has since taken aim at the North American Free Trade Agreement (NAFTA), and Mexico in particular, although there are signs that presidential bravado may giving way to more measured deliberations as the new administration gradually discovers the real-world constraints of policymaking,” Beacon experts say.

“Both the U.S. and Mexico now seem prepared to reappraise an agreement that was drafted nearly a quarter century ago when negotiators could not have possibly comprehended the changes that have since occurred in supply-chains, industrial processes, and product lines. With Mexico as its leading export market, the consequences for California are not at all clear,” say Beacon experts.

The Beacon report concludes: “Relations with China are also of great concern. China is California’s third largest export market and, by far, the largest driver of trade through the state’s seaports. Anything that would diminish the flow of trade through California’s ports would have a serious economic impact not just on the ports themselves and their customers but also on the legions of workers who process the movement of goods transiting those ports.

“While President Trump has appointed anti-China hardliners to lead the charge on trade, it remains to be seen how his policy actions will match up to his campaign rhetoric. Regardless of whether the Trump administration succeeds or fails in its policy efforts, it has contributed to heightened levels of uncertainty in the economy, which is good for neither businesses nor consumers in California and the United States.”