The California Chamber of Commerce has identified two additional job killers. This brings the list total to 24 bills.

SB 654 (Jackson; D-Santa Barbara) was gutted and amended on August 11, taking language from a previous job killer, SB 1166 (Jackson; D-Santa Barbara), which imposed a new maternity and paternity leave mandate, and inserting it into this new vehicle. Before the amendments, SB 654 dealt with the hazardous waste permitting process and was authored by Senator Kevin de León ( D-Los Angeles).

CalChamber has identified the newly amended SB 654 as a job killer because it will significantly harm small employers in California with as few as 10 employees by adding to the existing burden under which they already struggle, as well as potentially require large employers to provide 10 months of protected leave and threatens all employers with costly litigation.

According to CalChamber’s analysis of SB 654, the bill targets small employers with only 10 employees and requires those employers to provide 12 weeks of leave. California already requires employers with 5 or more employees to provide up to four months of protected leave for an employee who suffers a medical disability because of pregnancy. CalChamber’s analysis finds that SB 654 will add another 12 weeks of leave for the same employee, totaling seven months of protected leave.

“Such an extensive period of time for a small employer with a limited workforce to accommodate is unreasonable,” CalChamber’s letter states.

In addition, as “protected leave,” this time off must be given at the employee’s request, regardless of whether the employer has other employees out on other California-required leaves. This mandate on such a small employer with a limited workforce creates a significant challenge for the employer’s ability to maintain operations.

Subsequently, SB 654 labels an employer’s failure to provide the 12-week leave of absence as an “unlawful employment practice.”  This label is significant as it exposes an employer to costly litigation under the Fair Employment and Housing Act (FEHA). An employee who believes the employer did not provide the 12 weeks of protected leave, failed to return the employee to the same or comparable position, or maintain benefits while the employee was out on the 12 weeks of leave, could pursue a claim against the employer seeking: compensatory damages, injunctive relief, declaratory relief, punitive damages, and attorney’s fees.

CalChamber’s letter explains that California is already recognized by the National Conference of State Legislatures as one of the most family friendly-states given California’s list of programs and protected leaves of absence that includes: paid sick days, school activities leave, kin care, paid family leave program, pregnancy disability leave, and the California Family Rights Act (CFRA). This list is in addition to the leaves of absence required at the federal level.

“Imposing another 12-week leave of absence, targeted specifically at small employers, is simply too much for employers to bear,” the letter states.

AB 2895 (R. Hernández; D-West Covina) inappropriately exposes employers to increased litigation costs by adding a private right of action, the risk of class action lawsuits and Private Attorneys General Act (PAGA) claims related to the employer’s written Injury and Illness Prevention Program (IIPP) by requiring employers to provide their employees or their representative a written copy of the IIPP, a violation of which, in certain circumstances is subject to injunctive relief.

CalChamber has identified AB 2895 as a job killer because the bill imposes a new private right of action, an enforcement action that provides free discovery for trial attorneys, and increases the risk of class action lawsuits— all at a cost to employers where there is no risk or harm to employees.

AB 2895 requires employers to provide their employees with access to the IIPP, along with various other provisions, including a provision to allow an employee or his/her authorized representative to request a written copy of the IIPP.

CalChamber explains in its opposition letter that a failure of the employer to provide the written copy would be subject to Cal/OSHA enforcement, or injunctive relief that would require the employer to appear in court. This provision would provide a pathway for harassment of employers, and allows multiple requests from multiple employees and representatives. The bill does not consider the burden on the employer in handling multiple requests.

The provisions of AB 2895 would also be subject to enforcement and attorney fees through the Private Attorneys General Act (PAGA—Labor Code Section 2698 et seq.), which allows employees to pursue civil penalties through the legal system when agencies do not have the resources to do so. PAGA is used extensively by California employees.

The Governor’s Proposed Budget for 2016 indicates there were more than 6,000 PAGA notices filed with the Labor and Workforce Development Agency in 2014. As a result, the Legislature has passed and the Governor has signed several bills to reform PAGA. Passing AB 2895 would be contrary to the direction of the legislature and the governor to reform PAGA.

The provisions of this bill are overly burdensome and punitive, particularly in light of the fact that this information will be of no use to employees because it consists primarily of the operational and logistical details of the employer’s plan. Employees that do not access the written IIPP are not harmed and are not at risk of injury or illness, and no need for this bill has been demonstrated, the CalChamber letter states.

The California Chamber of Commerce (CalChamber) is the largest broad-based business advocate to government in California.  Membership represents one-quarter of the private sector jobs in California and includes firms of all sizes and companies from every industry within the state.  Leveraging our front-line knowledge of laws and regulations, we provide products and services to help businesses comply with both federal and state law.  CalChamber, a not-for-profit organization with roots dating to 1890, promotes international trade and investment in order to stimulate California’s economy and create jobs.  Please visit our website at www.calchamber.com 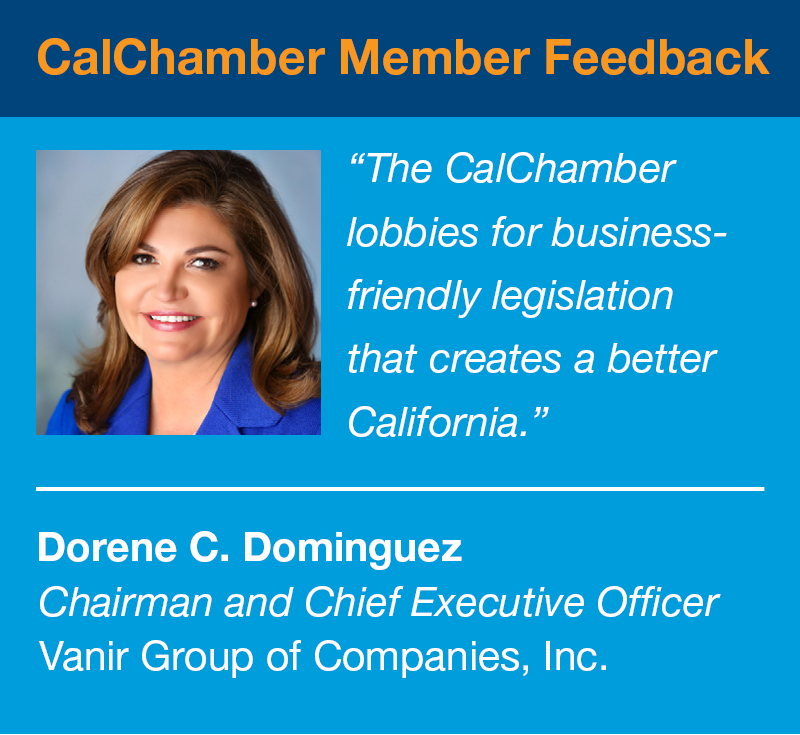