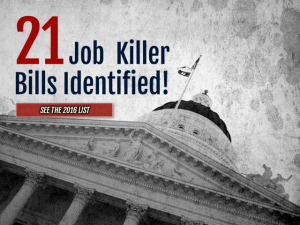 The California Chamber of Commerce yesterday added a budget trailer proposal to its job killer list, bringing the total number of job killers to 21. The latest item will be considered by the Senate and Assembly Budget Committees in the coming weeks.

The job killing proposal seeks to eliminate a predictable and workable flat permitting fee option for permit applicants seeking to obtain a hazardous waste permit from the Department of Toxic Substances Control (DTSC).  The budget trailer language will instead require applicants to enter into an uncapped reimbursement agreement with DTSC, which is akin to handing DTSC a “blank check” to process permit applications. According to CalChamber and a coalition of trade associations, local chambers of commerce, and recycling facilities, the proposal would be costly to permit applicants and invite potentially intractable disputes. The process being contemplated would add further delays to the permitting process and impose extraordinary, unjustified, and unpredictable costs on businesses trying to move forward with development plans for facilities needed in aerospace, recycling and waste disposal, energy, oil and gas, to name a few.  The cost for obtaining a permit would be unpredictable and unsustainable, and would thus discourage investment in facility upgrades and renewals for critical hazardous waste facilities.

In their opposition letter, the CalChamber and coalition explain that they “fundamentally object to the notion of requiring permit applicants to contribute to an uncapped, pay-as-you-go program for the purpose of reimbursing a permitting agency that is consistently charged by stakeholders and even independent third parties for having poor management practices with respect to processing permit applications.”

Under DTSC’s proposed language, the cost to obtain a permit renewal or modification would be limitless and thus, further investment in critical hazardous waste infrastructure upgrades will falter.

California’s manufacturing sector and the larger California economy depend upon sustaining a hazardous waste system that can efficiently handle waste in a manner that protects both Californians and their environment.  For example, approximately 85 percent of the waste deposited at one of the largest hazardous waste facilities in California is treated as hazardous waste only in California.  If and when it leaves the state because of unsustainable permitting processes like the one the budget trailer language proposes, the waste is then treated as non-hazardous and thus subject to few, if any, environmental protocols.