A coalition of California leaders—including community, faith, civic, labor and business leaders—yesterday launched CalEITC4me, a statewide campaign to ensure the first-ever California Earned Income Tax Credit (EITC) winds up in the hands of those who worked hard to earn it. The campaign will also focus on increasing the availability of free tax preparation services locally.

California joins 24 other states and the District of Columbia in adopting a state EITC to supplement the federal EITC.

What is the California Earned Income Tax Credit (CalEITC)?

CalEITC is a cash back tax credit that puts money back into the pockets of California’s working families and individuals, available for the first-time this tax season.

The CalEITC could boost income for an estimated 600,000 eligible families.

You are eligible for EITC if:

You have earned income within certain limits (see chart below), AND

You, your spouse, and any qualifying children each have a social security number (SSN), AND

You do not use the “married/RDP filing separate” filing status, AND

You lived in California for more than half the tax year. 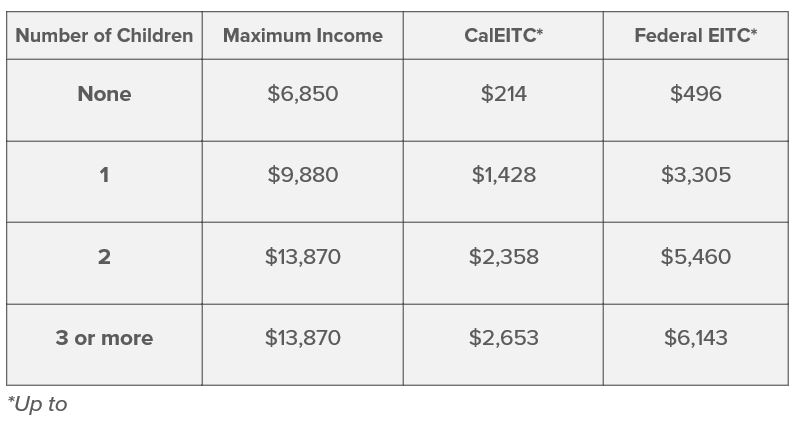 How will the CalEITC and the federal EITC work together?

Both credits will be available this tax season and may provide eligible Californians with a refund or reduce the amount of money they might owe.

Californians that qualify for the CalEITC will likely also qualify for the federal EITC. This will significantly boost household income for eligible families and individuals.

How will Californians benefit from the state credit?

Working families have the chance to get ahead. Studies show that young children in households that receive the EITC do better in school, are more likely to attend college and earn more, brightening the future of the next generation.

CalEITC4Me.org is a one-stop, multilingual online hub of information and interactive resources.  Innovative online tools have been developed to include the CalEITC4Me Calculator, a user-friendly tool, created for California by the Intuit Financial Freedom Foundation, where individuals can determine their new state and federal EITC eligibility and potential refund in a few easy steps; the Free Tax Prep Finder, which connects families to local free tax preparation services; and the interactive CalEITC4Me Heat Map that allows nonprofits, government agencies and others to identify key regions of eligible filers by ZIP code and other searchable criteria.