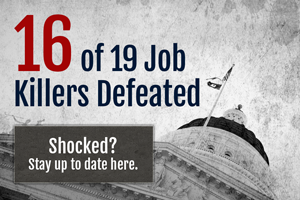 As the 2015 legislative session came to a close late Friday evening, 16 of 19 identified job killer bills had been effectively stopped through efforts of the California Chamber of Commerce, local chambers and the business community. In fact, in the last few days of session, strong opposition from these groups helped to stop three of the final four job killer bills that remained alive when legislators returned from summer recess in August.

Many job killer bills were the focus of rigorous debate and controversy. Below is a recap on the highest profile job killer bills that were still active in the last two weeks of session.
A job killer bill, SB 350 (de León; D-Los Angeles), that potentially would have increased costs and burdens on all Californians by mandating an arbitrary and unrealistic reduction of petroleum use by 50%, increasing the current Renewable Portfolio Standard to 50% and increasing energy efficiency in buildings by 50% — all by 2030 without regard to the impact on individuals, jobs and the economy was amended to remove the job killer tag and CalChamber’s opposition. CalChamber has no position on SB 350.

Stopped in the Assembly

A second climate change bill, SB 32 (Pavley; D-Agoura Hills), which would have increased costs for California businesses, made them less competitive and discouraged economic growth by adopting further greenhouse gas emission reductions for 2030 and 2050 without regard to the impact on individuals, jobs and the economy was held in the Assembly Natural Resources Committee.

Still another job killer, SB 654 (de León; D-Los Angeles), which would have shut down hazardous waste facilities and resulted in the export of waste to other states without California’s strict environmental regulations, was held in the Assembly on the inactive file on September 8 when it became obvious there were not enough votes to pass the bill.

An employment-related bill, SB 406 (Jackson; D- Santa Barbara) which will significantly expand the California Family Rights Act passed the Assembly late Friday night, 41-30. The bill will likely increase costs, risk of litigation and lessen conformity with federal law by expanding the family members for whom leave may be taken, which will provide a potential 24-week protected leave of absence for employers to administer.

AB 465 (R. Hernández; D-West Covina) which will significantly drive up litigation costs for all California employers as well as increase pressure on the already-overburdened judicial system, has been sent to the Governor.

AB 465 will worsen the litigation environment and hurt job creation because it precludes mandatory employment arbitration agreements, which is likely pre-empted by the Federal Arbitration Act. The bill will serve only to increase litigation costs of individual claims, representative actions and class action lawsuits against California employers of all sizes until such legislation can work through the judicial process to be challenged once again.

The CalChamber is urging its members to contact Governor Brown and ask him to veto SB 406 and AB 465.

One job killer bill, AB 359 (Gonzalez; D-San Diego), dealing with grocery workers, was sent to the Governor in August and was signed into law.