The National Center for APEC (NCAPEC) welcomed the introduction of S. Con. Res. 16 and H. Con. Res. 54, expressing support for stronger relations between the United States and the AsiaPacific Economic Cooperation (APEC).

November 7, 2014 – Beijing, China – U.S. Trade Representative Michael Froman today delivered the following opening remarks, “As we consider how to guide APEC in the right direction, I think the three priority pillars highlighted this year by China – regional economic integration, innovative development, and connectivity – provide us with a framework to address these challenges and shape a forward agenda that will guide us for the next 25 years.

President Obama Signs into Law the APEC Business Travel Cards Act of 2011
S. 1487 supports expanded business travel and trade with the Asia-Pacific region and would allow business leaders from the United States and senior government officials who are actively engaged in APEC business to receive APEC Business Travel Cards (ABTCs) that would expedite their international travel within the 21 APEC member countries.

(September 2011) Delegates from around the Pacific Rim have concluded the largest set of high-level diplomatic talks to be held in San Francisco.

Hosting the September 12 through September 26 gathering was the CalAPEC (Asia Pacific Economic Cooperation) committee, of which the California Chamber of Commerce is a founding member.

California’s participation in APEC was first announced at the CalChamber Council for International Trade (CIT) meeting in 2008 by CIT member Paul Oliva, who since has been directing the CalAPEC organization.

The core mission of the APEC is to promote trade and investment among the Asia-Pacific member economies, strengthen economic integration in the Asia-Pacific region, as well as make regional economic growth more inclusive and sustainable.

The schedule included 150 official and public-private sessions and functions. There were an intensive series of meetings, including the Senior Officials’ Meeting, working group and committee meetings, together with public-private forums involving senior government and private sector leaders. Discussions centered on energy, transportation, women and the economy, digital prosperity, health care innovation, and many other topics.

The positive local economic impact of the APEC is expected to total at least $20 million.

With statements on topics ranging from transportation, energy, small and medium enterprises (SMEs), and women in the economy, APEC leaders, including U.S. President Barack Obama, will meet next in Honolulu in November for the final 2011 meeting hosted by the U.S.

The summit addressed access to capital and markets for women, building their capacities and skills, and supporting the rise of women leaders in the public and private sectors. Participants also discussed innovation, green growth, technology, entrepreneurship, and public-private partnerships.

Supporting the effort to bring the Senior Officials’ Meeting to San Francisco were a number of CalChamber member companies, including:

Christopher Reynolds of Toyota Motor Sales, USA Inc. and Margaret Wong of McWong International, Inc., both members of the CalChamber Board of Directors, were delegates.

The APEC 2011 California Host Committee, or CalAPEC, was the local host committee for APEC 2011 talks. It is a statewide coalition of business, government and international organizations under the umbrella of the Bay Area Council Economic Institute and the CalChamber. The committee also ensured that U.S. objectives reflect good policy for the Golden State as California is more dependent on Asia-Pacific business than any other U.S. state.

California Governor Edmund G. Brown Jr. welcomed the 21 member economies of APEC to California for the intensive series of meetings, including the Senior Officials’ Meeting, working group and committee meetings, together with public-private forums involving senior government and private sector leaders. Discussions centered on energy, transportation, women and the economy, digital prosperity, health care innovation, and many other topics.

Attendees at the Transportation and Energy Ministerial portion of the two-week APEC gathering included 2011 CalChamber Chair S. Shariq Yosufzai of Chevron Corporation and the Consul General of the Republic of Singapore, Hock Seng Chin. Chevron is a member of the APEC Host Committee. Singapore is the 11th largest export market for California.

A major strategic trading partner of the United States and one of America’s closest friends, Singapore has one of the most open, well-regulated, safe and secure investment climates in the world. It is consistently rated among the most competitive economies in the world. The U.S.- Singapore Free Trade Agreement is making this productive relationship even closer. Singapore is one of the 21 member economies of APEC.

USS-POSCO is the largest steel producer in the United States and ranks 10th globally. USS-Posco is a longtime CalChamber member and Obermire is an active member of the CalChamber Council for International Trade.

John Leitner, president and CEO of W.J. Byrnes & Company, hosted APEC delegates participating in the Customs Procedures discussions to a cultural event—“The Journey to America.” Delegates sailed on the historic Presidential Yacht Potomac and visited Angel Island to tour the historic U.S. Immigration Station. The U.S. Coast Guard was on board to welcome delegates as well. W.J. Byrnes & Company is a longtime CalChamber member and Leitner is an active member of the CalChamber Council for International Trade. W.J. Byrnes & Company is a custom brokerage firm established in 1907.

U.S. Secretary of State Hillary Clinton was a featured speaker at the Women and the Economy Summit portion of the APEC gathering. Summit attendees included Paul Oliva, head of the CalAPEC committee; Janet Lamkin, California state president of Bank of America and a member of the CalChamber Board of Directors; Marie Chinnichi-Everitt of Bank of America; Oakland Mayor Jean Quan; Jim Wunderman, president and CEO of the Bay Area Council.

Updates from the APEC Senior Officials’ Meetings in San Francisco

Collectively, the 21 economies of APEC, which touch the Pacific Ocean, represent a large consumer market – nearly half the world’s population, nearly half of all world trade and approximately $42.8 trillion in economic output. (Apec Statistics)

On September 13, 2010, the U.S. State Department announced that San Francisco will host Asia-Pacific Economic Cooperation (APEC) forum meetings in September 2011. Integral to bringing the APEC meetings to San Francisco was the public-private statewide organizing committee, CalAPEC. CalAPEC is led by San Francisco businessman Paul Oliva with the support of the California Chamber of Commerce, Bay Area Council Economic Institute, and other regional business leaders. APEC is the first high-level international government meeting for either San Francisco or California to bid on and win in more than a decade.

The APEC process rotates by country each year. Japan hosted the APEC meetings in 2010.

APEC’s San Francisco meetings were in preparation for a November 2011 heads-of-state meeting in Honolulu. Senior Officials’ and other high-level meetings will be held in Washington D.C. and Montana earlier in the year.

APEC ministers have met each year since November 1994, when they issued the Bogor Declaration, which calls for industrialized members of APEC to remove trade barriers. The last time the United States hosted APEC was in 1993, with ministerial and summit meetings in the Seattle area.

The APEC is important as a vehicle for all Asia-Pacific economic integration.

This regional group sets a high standard that will enhance the competitiveness of the countries that are part of it and help facilitate trade and promote investment among them, increasing their economic growth and development. 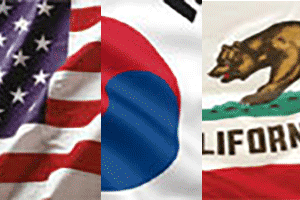 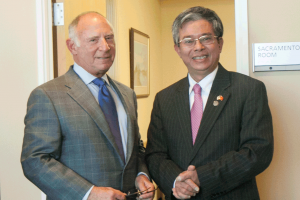 Highlights from the Third Senior Officials Meeting in Vietnam
August 2017

Letter from Governor Schwarzenegger to the U.S. State Department regarding the selection of San Francisco to hold several key APEC 2011 meetings – 8.13.10