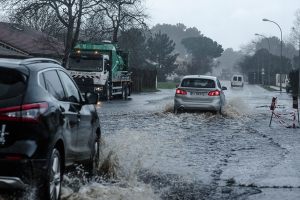 Damaging winds and heavy rains from a powerful “atmospheric river” pounded California on Thursday, knocking out power to tens of thousands, causing flash flooding, and contributing to the deaths of at least two people, including a child whose home was hit by a falling tree.

Officials had ordered evacuations in a high-risk coastal area where mudslides killed 23 people in 2018 as the huge storm barreled into the state Wednesday. Authorities warned residents to hunker down at home in anticipation of flooded roads, toppled trees and other risks.

It was the latest in a rapid series of atmospheric rivers — long plumes of moisture stretching far over the Pacific — to hit California. This one was a “Pineapple Express” originating near Hawaii and pulled toward the West Coast by a rotating area of rapidly falling air pressure known as a “bomb cyclone.”