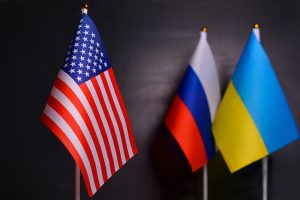 Russia’s invasion of Ukraine will have an impact on the world economy that is still not fully recovered from the pandemic. However, it is too early to tell the full impact just-imposed sanctions will have on the world market, the global supply chain or California specifically.

Oil prices went past $100 a barrel for the first time since 2014. Further important to the worldwide supply chain, both Russia and Ukraine are rich in resources, minerals and metals—in addition to be being top exporters of grain/wheat and sunflower oil. Ukraine, the fourth largest exporter of agricultural products in the world, often is referred to as Europe’s breadbasket.

However, the tragic threat to democracy and violation of international law is felt worldwide and most certainly to the roughly 112,000 people of Ukrainian descent who call California home.

Ukraine has a population of approximately 41.29 million and is the second largest country in Europe by land mass. In 2021, Ukraine’s GDP was $181.04 billion, with real GDP growth at 3.5% and an annual average inflation of 7.1%.

In Washington DC, the Biden Administration via the Departments of Treasury and Commerce announced on February 24, 2022 both financial sanctions and export controls to Russia on software and equipment considered critical to the defense, aerospace and maritime industries – geared to impose severe costs on Russia’s economy.

Russia was the United States’ 39th largest export partner, with the U.S. exporting $6.388 billion to Russia in 2021, $1.84 billion being transportation equipment. This was followed by non-electrical machinery, computers and electronic products, and chemicals.

The US imported $29.69 billion from Russia in 2021, with $12.79 billion being petroleum and coal products. Primary metal manufacturing contributed $6.57 billion, oil and gas contributed $4.7 billion, while chemicals made up $2.3 billion.

Imports from the Ukraine to the United States totaled $1.88 billion in 2021. The top imports were primary metal manufacturing ($1.11 billion), processed foods ($139 million), and minerals and ores ($78 million).

California is among the top 10 state exporters to Ukraine, with $252 million in exports in 2021. Used or secondhand merchandise accounted for $114 million of exports (Ukraine is a top importer of used clothing), followed by transportation equipment at $45 million, agricultural products at $44 million.

California imported $81 million from Ukraine in 2021, which included $40 million in processed food, followed by agricultural products and electrical equipment.