“There go the people. I must follow them, for I am their leader.”
– Likely apocryphal quote attributed to French Revolutionary. 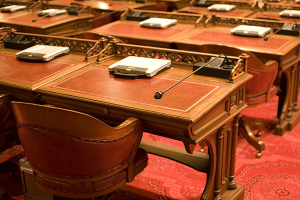 Voters and their representatives often have clashing sentiments over public policy priorities, especially during times of crisis – whether a pandemic or a tax revolt – when politicians must catch up to the public mood.

The seventh CalChamber poll, The People’s Voice, 2021, found that elected leaders are out of alignment with the voters on several important policy issues.

Californians start with a healthy skepticism of their leaders. Nearly three-quarters of voters believe that “Legislators are out of touch with the issues that are most important to people like me.” This is notable since 56% of voters believe that California is heading in the “right direction,” the most confidence shown in that overall measure in five years.

The CalChamber poll gauges responsiveness to voter concerns by conducting an Issue Importance Analysis. The poll measures awareness, which is whether voters “have heard quite a bit about this issue from elected officials in Sacramento,” and demand, which is whether voters believe “elected officials in Sacramento are not spending enough time on this issue.” Inquiring about individual policy priorities along these dimensions reveals whether voters believe that elected leaders are devoting their attention to issues of highest priority to voters. 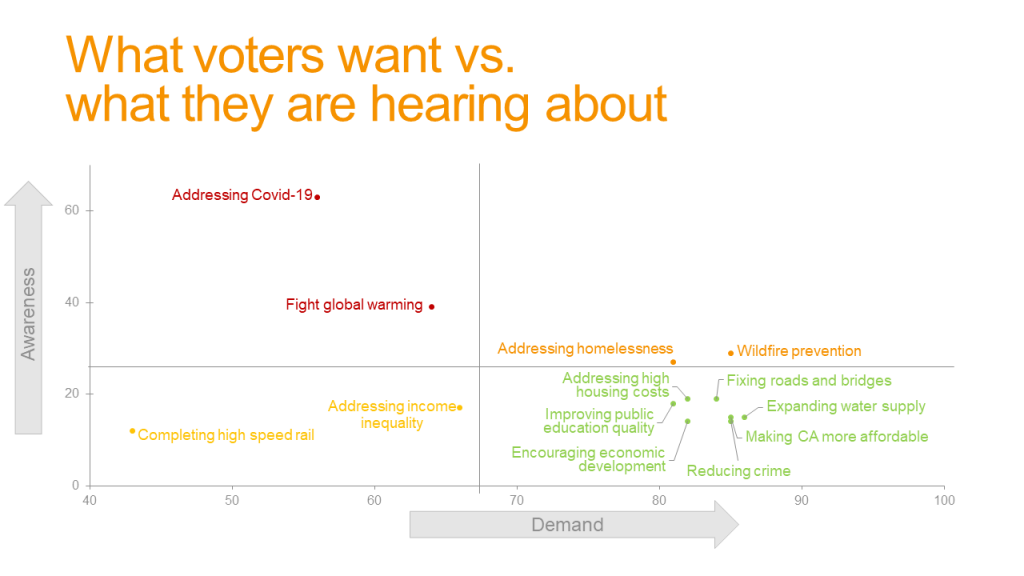 As the chart above shows, voters believe their leaders are spending too much attention on just a couple issues that already have enough attention: addressing COVID-19 and the need for the state to fight global warming. But leaders are not spending enough time on a host of issues of greater immediate concern to voters, including reducing crime, making California more affordable, improving quality of public education, expanding the state’s water supply, addressing high housing costs, encouraging economic development, and fixing roads and bridges.

The biggest disconnect between voters’ appetite for action and what they have heard from state leaders about the issue is on reducing crime, making California more affordable, and expanding the state’s fresh water supply. These issue areas provide political and policy opportunities to fill huge unmet demands.

Taking a different approach to issue spotting, the CalChamber poll asked voters how they might spend expected budget surpluses over the next year. Voters were not restricted in their choice by constitutional mandates or budgetary norms since this was an exercise to determine priorities.

When asked where they might invest a budget surplus, by a wide margin voters chose as “very important” water/drought and wildfire prevention, at 74% and 66%, respectively, followed by addressing homelessness. At the bottom of the list for surplus distribution is income inequality, identified as very important by 35% of voters, behind health care expansion, tax cuts and economic development in the bottom tier. Clustered in the middle were traditional issues like education, housing, roads, public safety, and climate change.

Voters know that the safety valve of an unresponsive Legislature is direct democracy. Even as politicians and pundits criticized the recall in the wake of Governor Gavin Newsom’s successful retention of his job, a plurality of voters supports direct democracy. Asked if “concepts such as recall, initiative and referendum are part of the problem or part of the solution,” 42% of voters agreed with “solution,” 36% agreed with “problem,” and 23% were undecided.

In previous articles we have reported about California voters’ economic concerns and anxiety about public safety. Subsequent articles will take a deep dive on public policy issues of interest to voters and employers.