This Recovery Is Not a Sugar High

The parade of robust economic data continues to march onward. The data at the end of the quarter, following the February chill, has been explosively strong. It is starting a wave of powerful momentum that we believe will continue for several quarters.

Estimates for 2021 growth have accelerated and now stand at 6.2%, the highest level in almost 40 years.

With the liftoff of the economy securely behind us, the focus is on how strong and how long the economic recovery/expansion will last. It can’t be just pent-up demand and money in the bank from federal stimulus checks for the economy to be sustainable (sugar high). Instead, a feedback loop needs to be established: an increase in consumer spending, which leads to a boost in corporate profits, leading to companies hiring more and investing in their business (capital expenditure), which gets us back to more consumer spending.

In the expansion before the pandemic, the pace of gross domestic product (GDP) growth was relatively anemic due to weakness in companies investing in their business. This recovery doesn’t seem to be on that path; there is far greater access to credit and willingness to take it. 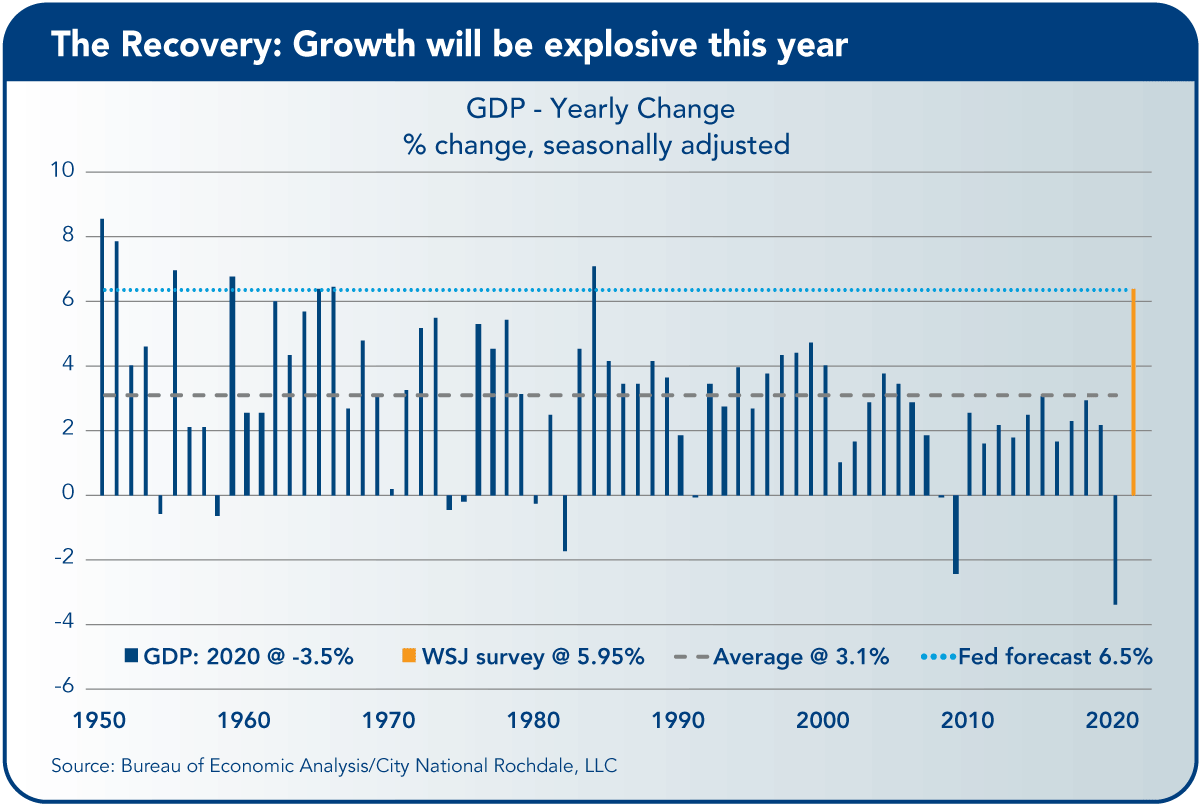 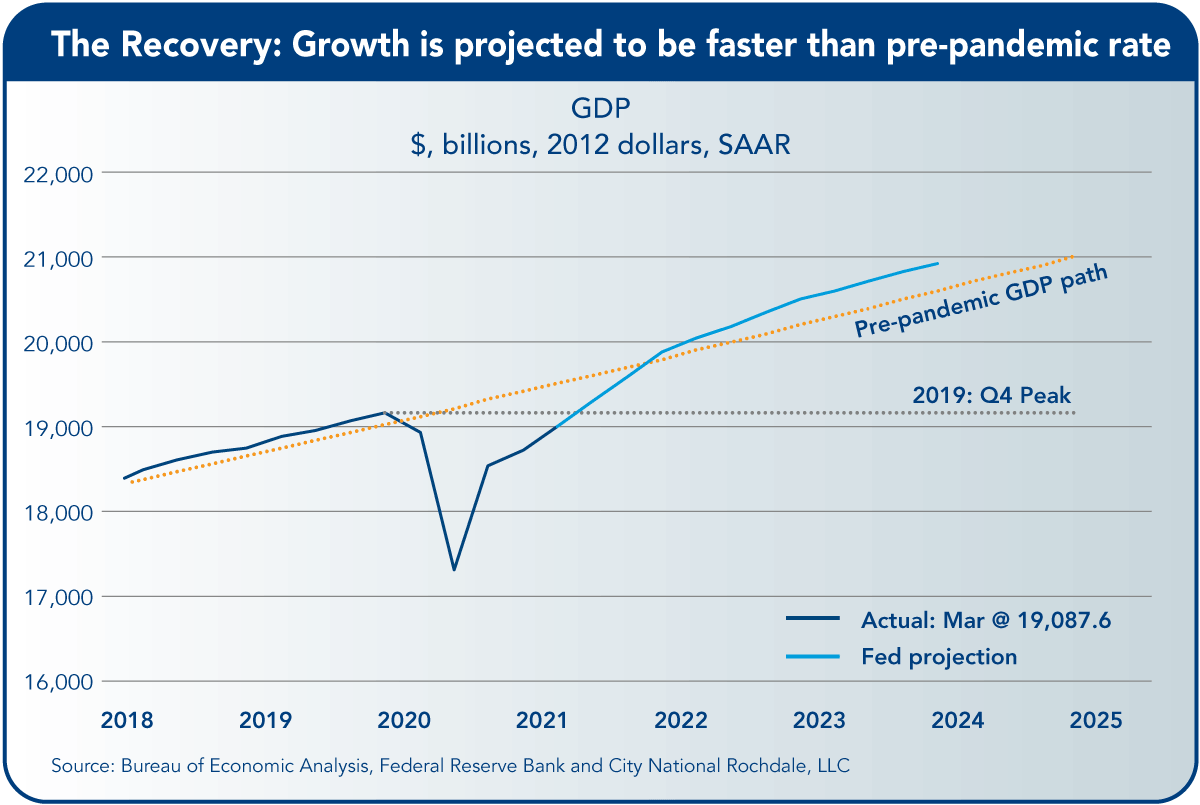 For about a year, households have been accumulating savings and have not had a place to spend it. That has changed. Retail sales in March surged 9.8%, and the yearly change stands at 27.7% (well above the long-term average annual increase of just 4.3%).

The demand for many goods is outpacing supply. Producers are trying to increase supply, but they are being forced to deal with many bottlenecks in the supply chain. That is putting some upward pressure on prices, but that is temporary. Once the supply/demand imbalance is corrected, prices are expected to retreat.

The housing sector continues to surge due to low mortgage rates, demand for larger space, and a strong homebuyer balance sheet. But demand is outpacing supply, due mainly to existing homeowners not selling their homes, and prices are surging, up 11.1% year-over-year.

This should not be confused with the bubble. Unlike the mid-2000s, there are no speculative buyers. Large down payments are needed, and rigid credit work is being done on the home buyer.

The service sector employs about 85% of the workforce. Growth in this sector for the last year has been hurt badly by the pandemic, but the outlook is changing and still has a long way to go until it fully recovers.

We may see even higher numbers in this index in the coming months as the economy continues to reopen.

Inflation has become the key topic for many clients and the financial markets — for a good reason: inflation is moving up. Last May, the yearly change hit a nadir of 0.1%; now it is at 2.6% and is expected to move higher over the coming months.

For reference, last February, before the pandemic, the yearly change was 2.3%.

There are two critical reasons for the recent increase in the yearly change of the consumer price index (CPI).

• Prices have been moving up in the last few months; the annual rate for CPI over the past three months is 5.0%. As the economy has been reopening, demand is well-outpacing supply.

Strong spending since last summer had already depleted supplies. Adding to that are contemporary problems like supply chain bottlenecks, manufacturing supply shortages, surging input costs, traffic jams at West Coast ports, and scarcity of steel, lumber and computer chips. And demand is picking up with the reopening of the economy.

These imbalances will work their way out, but it will take months. Some businesses have chosen to absorb the costs rather than risk losing market share, but not all are.

For CPI, the most significant cause of the recent surge has been a spike in energy costs, which have been highly distorted. Last March, prices fell off a truck; oil was around $20/barrel; now it is around $60/barrel, about the same level it was at before the pandemic.

• The yearly change is being distorted by a phenomenon called the “base effect.” Last year, prices declined in response to the widespread business closure from the lockdown. Those figures are being dropped off the yearly calculation, thus lifting the annual change.

The Federal Reserve expects inflation to move up this year due to growing demand, fueled by increased vaccination rates, falling restrictions on businesses, trillions of dollars of federal relief programs, and a high level of consumer savings. But the Fed has been consistently very clear on the issue of higher inflation this year.

They view the price pressures as transitory, and they will not alter monetary policy in response to these movements — they will want to see if inflation is persistent. Actual inflation is a process, not a couple of data points. It takes time for inflationary pressures to build in an economy.

The recent report was unambiguously strong. The March increase, along with revisions, puts the net gain in payrolls over 1 million. Payroll growth is expected to be strong amid lower COVID-19 cases, continued relaxation of business constraints in many states, a growing number of Americans receiving vaccinations, and a household full of cash.

The Fed has committed to keeping the federal funds rate at the near-zero level until the beginning of 2024.They want to ensure that economic growth is sustainable, and they would like the inflation rate to move slightly above their target level of 2.0%. For the past 10 years, it has averaged just 1.6%.

When the Fed is ready to ease up on the monetary stimulus, the first move will be to reduce the bonds they purchase each month. This is something they will ease into, and they do not want to shock the markets.

On April 28, President Joe Biden addressed a joint session of Congress, covering everything from COVID to climate to China. The most crucial part is details of his “American Families Plan,” the next installment of his infrastructure investment. It is a $1 trillion to $2 trillion program focusing on family issues and individual tax increases. It is the expected tax increases that have gained the attention of the financial markets.

Most notable is the proposal to raise the capital gains tax to 39.6% from 20% for high earners (above $1 million, about a third of 1% of the tax filers). With the 3.8% Affordable Care Act surtax, this would put the rate at 43.4%, the highest level in more than 100 years since Congress established the income tax.

But that proposed tax rate may be an opening salvo. As we have seen with the conversation in Congress regarding the “American Jobs Plan,” Congress is not as ambitious about raising taxes as the White House.

If moved, the contemporary belief is that the capital gains tax will be closer to 28%, the same level that Reagan and a Democratic House agreed to a few decades ago. This is an issue that remains in flux for the next few months. The passage is not expected until autumn. 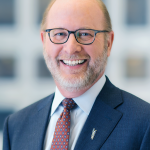 This economic outlook report to the CalChamber Board of Directors was prepared by Paul Single, managing director, senior portfolio manager, City National Rochdale.

California Economy: a Soft Landing, Or a Mild Recession?