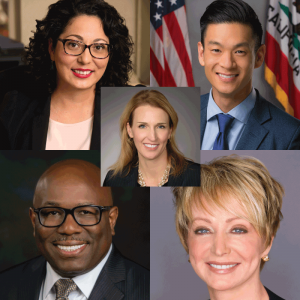 The February 19 webinar, “Diversity in the Workplace: Pathways to Success,” was moderated by CalChamber Executive Vice President Jennifer Barrera, who oversees the development and implementation of policy and strategy, and represents the CalChamber on legal reform issues.

Joining her on the panel were:

This video shows highlights of the webinar. A recording of the entire webinar is available at https://www.calchamber.com/webinars/20210219-diversity-in-the-workplace/.

CalChamber podcasts, webinars, blogs, and other training materials on diversity and inclusion are available for free at www.calchamber.com/diversity.

This article is a condensed recap of the recorded webinar. Readers are encouraged to watch the webinar in full to learn more about diversity and inclusion in the workplace.

To start off the webinar, each panelist shares their background and experiences.

• Assemblymember Cristina Garcia recounts how when she attended college,
she often was the sole Latina in the class and was expected to represent and speak
for all Latinos. In other situations, her opinions were dismissed because she was
deemed “different” from other Latinos. She has even been told by colleagues that
she just doesn’t “get it.” “I do get it, it’s just that I come from a
different experience,” she says.

• Assemblymember Evan Low, who was the first Asian American to serve on the Campbell City Council and later became the first LGBT mayor of the city, points out that there is a lot of intersectionality within the California legislative caucuses. Diversity and inclusion are more than mere tokenism, where the goal is to just check off a box, he stresses. It is incumbent upon members of the Legislature to do the hard work to ensure they are diverse at all levels and have difficult conversations about how policy affects different groups of people.

• Diane Miller grew up as a first generation American who was motivated by her parents to go to college and was never really told she couldn’t do something. When she entered the business world, she often was the only woman in the room, and as she advanced in her career, she continued to be the only woman in the room. What is happening now, she says, is the recognition that diversity and inclusion are not just social issues, but they are business and value issues as well.

• Kevin Mitchell shares that he has been discriminated against by the police and by the school system. He also has witnessed how his brother, who is physically disabled, faced discrimination from schools because school representatives did not want to tarnish the schools’ image, despite the fact that Mitchell’s brother was a 4.0 student. Later in life, Mitchell saw how others formed opinions on where someone went to college, relating that he experienced discrimination because he attended Phoenix University for his undergraduate degree.

Mitchell has seen diversity all around him, but to him “diversity
by itself doesn’t mean anything.” Rather, “Diversity with inclusion means everything.”

Moreover, he stresses that his success is not just a product of hard work — he often has been in the right place at the right time. Many people work hard, but  are not given the opportunities to advance, he says.

Benefits of Having Diverse Talent

Promoting diversity and inclusion within a company is not brain
surgery, Miller says—employers just need to take a pragmatic approach
to see what can be done at their company and they need to ensure
that they provide equal access.

She points out that what diversity is at one company, may not be diversity
in another company, so businesses need to decide what diversity looks like
at their company for themselves.

Low adds that diversity and inclusion is good for a business’ bottom line, but
promoting diversity is not just sharing the latest ethnic celebration. It’s about sharing
experiences to show that people have more things in common than differences.

To illustrate the benefits of having a diverse workforce talent, Mitchell uses
a basketball analogy. Imagine, he says, having a basketball team where every
player was 7 feet tall and could slam dunk, but could not shoot a free throw or
three-pointer, or play defense. Having a diverse workforce brings productivity to
the team, allows companies to innovate and reach a wider audience.

In the public sector, and the Legislature specifically, Garcia explains that they must “legislate on experience.” When women are not at the table, 52% of the population is not there and their experiences are not being advocated for, she points out.

This divide is similar for people of color, people with disabilities and people with differing sexual orientations. Diversity helps people identify problems and blind spots in the market that are missed, Garcia says.

For small businesses, it can be intimidating to start a diversity and inclusion program, Miller says, so she recommends that small employers focus on two things:

Mitchell adds that both large and small businesses should have a strategy. What are you trying to achieve and why? After determining this, figure out how you’re going to lead and achieve it. It all starts at the top, he stresses, so employers need to decide how they will set the tone.

Next, employers should develop a metric that people can publicly see and provide a way for people to give input. Last, and most important, he says, be sure to tie compensation to all those metrics.

“Put your money where your mouth is,” Mitchell says.

When seeking diverse candidates for job positions, Miller suggests that employers comb through their job advertisements to ensure they’re not using terms that will turn off women or people of color. For example, if an ad states here will be a lot of travel involved, the
employer should be aware that it will turn off people who have children at home.

Employers should also be willing to be more flexible. For example, if a workplace
is located away from mass transit routes, the employer should look at ways to make
agreements with workers who need to use public transportation, Miller says.

Low adds that employers should be mindful that a job candidate from a diverse background is not necessarily coming to them because they want to be that company’s “first.” Employers should not give the impression that they seek that job candidate simply to check off a box.

Moreover, it’s important to provide a buddy or mentor to new diverse recruits to help integrate them into the organization, Miller says. Employers should also be sure to sponsor these workers when opportunities come along.