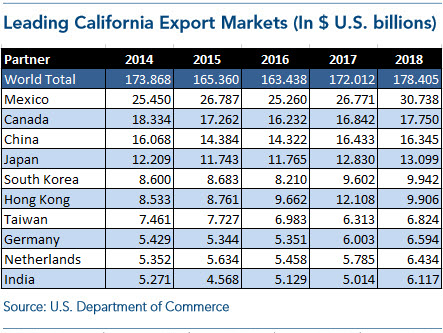 California is one of the 10 largest economies in the world with a gross state product of more than $2.5 trillion. International trade and investment are major parts of the state’s economic engine that broadly benefit businesses, communities, consumers and state government. California’s economy is diverse, and the state’s prosperity is tied to exports and imports of both goods and services by California-based companies, to exports and imports through California’s transportation gateways, and to movement of human and capital resources.

In 2018, combined goods and services exports were almost $2.5 trillion. They also increased 6% from 2017. Exports of services alone hit a record $828.1 billion. The United States also had record exports to several countries including Mexico ($265 billion) and the United Kingdom ($66.2 billion).

The U.S. Department of Commerce reported that,in 2018, California exports amounted to $178.4 billion. This is an increase from the 2017 total of $172 billion. California maintained its perennial position as a top exporting state.

Exports from California accounted for 10.7% of total U.S. exports in 2018. California trade and exports translate into high-paying jobs for more than 1 million Californians.

Computers and electronic products remained California’s largest exports, accounting for 32.5% of all California exports to Canada.

California is the largest exporting state to Asia. In 2018, California exported $122.706 billion in goods to the region.

California exports to Mainland China totaled $16.345 billion in 2018. Computers and electronic products accounted for 25.6% of exports to China.

California exports to Japan totaled $13.1 billion in 2018. Computers and electronic products accounted for 17.7% of total exports.

South Korea overtook the spot of California’s No. 5 trading partner as California exported $9.942 billion to South Korea in 2018. Almost 30% was made up of non-electrical machinery.

California exports to the European Union (28) totaled $31.84 billion in 2018. California is the top exporting state to Europe.