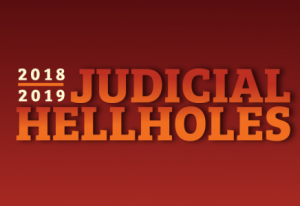 California has landed atop the “Judicial Hellholes” list again, according to the latest ranking of the “most unfair” civil litigation courts by the American Tort Reform Foundation (ATRF).

A recent study released by the U.S. Chamber Institute for Legal Reform highlights both the overall cost and inefficiencies of the tort system. The report states that the cost and compensation paid in the U.S. tort system totaled $429 billion in 2016, accounting for 2.3% of the U.S. gross domestic product.

The 2018–2019 Judicial Hellholes jurisdictions largely contributed to these costs, and on a local level, they saw job loss, personal income loss, and state revenue loss due to the excessive tort costs in the states. The data clearly demonstrate the need for a more balanced civil justice system, the report states.

According to the report, California is a perennial Judicial Hellhole because “California judges and legislators alike have a propensity to expand liability at almost every given opportunity.”

At the very end of 2017, the California Supreme Court became just the second state high court to adopt the theory of “innovator liability.”

This theory exposes a company that invested millions or billions of dollars into developing a medication to liability when a person who took a generic version made by a competitor alleges an injury from the drug.

California’s decision to adopt innovator liability makes it an outlier, according to the report. At least 35 state and federal courts have rejected innovator liability, which is a disincentive for companies to develop medications that save and improve lives.

Baseless Proposition 65 litigation unjustly burdens companies that do business in California. The originally well-intentioned law, enacted in 1986, is now one of the plaintiffs’ bar’s favorite tools to exploit.

Under Prop. 65, businesses are required to place ominous warning signs on products where tests reveal the slightest, non-threatening trace of any of more than 900 listed chemicals that state environmental regulators deem carcinogenic or otherwise toxic.

A troublesome part of the law allows private citizens, advocacy groups and attorneys to sue on behalf of the state and collect a portion of the civil fees, creating an incentive for the plaintiffs’ bar to create these types of lawsuits.

Each year, attorneys send thousands of notices to companies threatening Prop. 65 litigation and demanding a settlement. A search of notices on the California Attorney General’s website shows that the number of these threatened lawsuits has tripled over the last decade. Food and beverage companies are among the prime targets.

According to the California Attorney General’s website, businesses settled 688 Prop. 65 actions in 2017 totaling $25,767,500. Three-quarters of this money, $19,486,362, went to the attorneys who brought the lawsuits to cover their fees and costs. Just 24 advocacy groups, law firms, and individuals were behind this litigation.

Another significant problem with Prop. 65 litigation is that companies’ products are considered harmful until proven not to be.

After nearly a decade of litigation, Los Angeles Superior Court Judge Elihu Berle ruled in March that companies which sell coffee, like Starbucks, failed to show that coffee does not cause cancer; therefore, they must place cancer warnings on lattes and post warnings in their stores.

After the state Office of Environmental Health Hazard Assessment (OEHHA), the California agency that oversees Prop. 65 warnings, proposed exempting coffee from cancer warnings in August, plaintiffs’ lawyers sued the State of California too.

Enacted in 2004, California’s Private Attorneys General Act (PAGA) has become a means around arbitration clauses in employment contracts that limit costly, plaintiffs’ lawyer-enriching class actions. PAGA authorizes “aggrieved” employees to file lawsuits seeking civil penalties on behalf of themselves, other employees and the State of California for Labor Code violations. Many PAGA lawsuits revolve around technical nitpicks, such as an employer’s failure to print its address on employees’ pay stubs, even though the address was printed on the paychecks themselves.

Seventy-five percent of the penalties paid by non-compliant employers go to the state Labor and Workforce Development Agency while only 25% goes to the “aggrieved employees” and their lawyers, who take a third or so of that. In some cases, the plaintiffs’ lawyers receive even more. For example, plaintiffs’ lawyers walked away with 40% of a recent $9 million PAGA settlement with Target.

That settlement resolved three lawsuits accusing Target of failing to provide seating for more than 90,000 cashiers during their shifts. Target argued the nature of the cashier position does not permit sitting down, but settled given the lengthy litigation and plaintiffs’ seeking more than $200 million.

A California judge approved a settlement that awarded the lawyers $3.9 million in fees and $200,000 in costs, even as he expressed discomfort with the amount that would go directly into the pockets of the attorneys.

California courts, both state and federal, continue to be ground-zero for “no-injury” consumer protection lawsuits targeting the food and beverage industry.

The number of lawsuits has risen sharply in recent years. Since 2012, plaintiffs’ lawyers have filed more than 500 class actions challenging the marketing or labeling of food nationwide. About one-third of the food class action litigation in federal courts nationwide is in the Northern District of California, also known as the “Food Court,” located in San Francisco.

California is a favorite for these lawsuits due to its plaintiff-friendly Unfair Competition Law (UCL) and the potential to bring large class actions. Many of the targeted companies settle the litigation instead of risking the high cost of a trial and the negative publicity that would follow, leading to multi-million dollar settlements that feed the plaintiffs’ bar and provide little to no benefit for consumers.

A large number of lawsuits were filed under the Americans with Disabilities Act (ADA) in federal court against California businesses in 2017—2,751 lawsuits—up from 2,468 in 2016. California had the most ADA accessibility lawsuits of any state and had almost double the amount of the next closest state, Florida (1,488). These numbers do not include the many extortionate demand letters sent to businesses, nor does it include lawsuits filed in state courts.

In California, penalties for ADA violations are much higher than other states due to the state’s Unruh Civil Rights Act, which allows plaintiffs to recover compensatory damages of $4,000 per violation (compared to $1,000 under federal law) plus attorneys’ fees. Often these so-called “violations” are as minor as a mirror that is an inch too high or a sidewalk or parking lot that is angled one degree too much.

Not only are plaintiffs’ attorneys targeting “brick and mortar” stores, they are now targeting companies for website accessibility issues as well. Through the first six months of 2018, 2,155 lawsuits alleging that online shopping and other websites did not sufficiently accommodate individuals with visual impairments were filed in California alone. That number is more than double the next highest state, New York, where 1,026 lawsuits were filed.

Lawsuit Advertising May Cause Real Harm

Trial lawyers and aggregators spend large sums on television, digital, and print advertising to recruit new clients for product liability lawsuits, according to the report. In Los Angeles, California’s top media market and the second largest media market in the nation, $7.6 million was spent in the local television market to air 38,253 legal services ads in just a three-month period between April and June 2018. Area viewers saw 18 legal services ads every hour—seven times as many ads as viewers saw for pizza delivery and restaurants. Spending on lawsuit ads in the San Francisco Bay Area totaled $1.8 million to air nearly 21,000 commercials in the second quarter of 2018.

The full report is available at http://www.judicialhellholes.org