Foreign shipments by California businesses totaled $14.46 billion for the month, a nominal 1.2% gain over the $14.19 billion recorded in the same month one year earlier.

California accounted for 10.4% of the nation’s overall merchandise export trade in September, down from 10.9% last year. The state’s exports in the first nine months of 2018 amounted to $133.47 billion, 5.5% higher than the $126.46 billion during the same period last year. 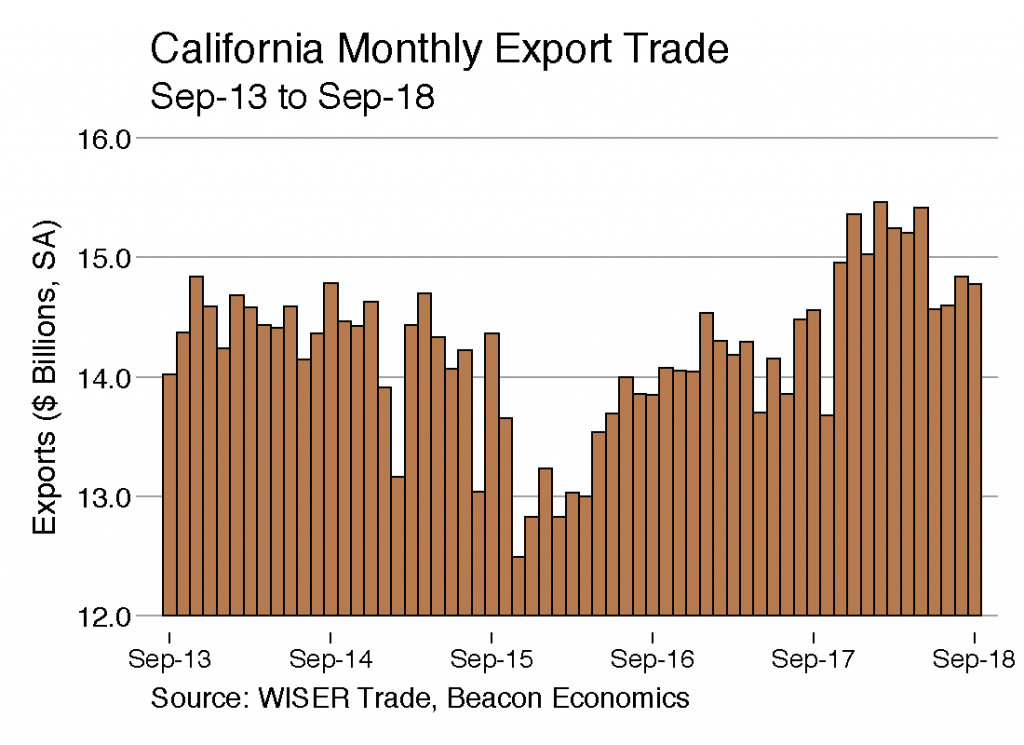 Closer Look at the Numbers

As always, Beacon Economics cautions against reading too much into month-to-month fluctuations in state export statistics, especially when focusing on specific commodities or destinations. Significant variations can occur as the result of unusual developments or exceptional one-off trades and may not be indicative of underlying trends. For that reason, Beacon Economics compares the latest three months for which data are available (i.e., July–September) with the corresponding period in the preceding year.

California’s merchandise exports during the July–September period totaled $43.65 billion, a nominal gain of 3% from the $42.4 billion in the third quarter of last year.

On the plus side, shipments of Computer and Electronic Products (computers and peripherals; communication, audio, and video equipment; navigational controls; and electro-medical instruments) rose by 2.7% to $11.57 billion from $11.27 billion.

Exports of Non-Electrical Machinery (machinery for industrial, agricultural and construction uses, as well as ventilation, heating, and air conditioning equipment) increased by 4% to $4.24 billion from $4.08 billion.

Shipments of Miscellaneous Manufactured Commodities (a catchall category of merchandise ranging from medical equipment to sporting goods) were up by 11.4% to $3.91 billion from $3.51 billion. Chemical exports (including pesticides and fertilizers; pharmaceutical products; paints and adhesives; soap and cleaning products; and raw plastics, resins, and rubber) gained 5.4% to $3.55 billion from $3.37 billion. 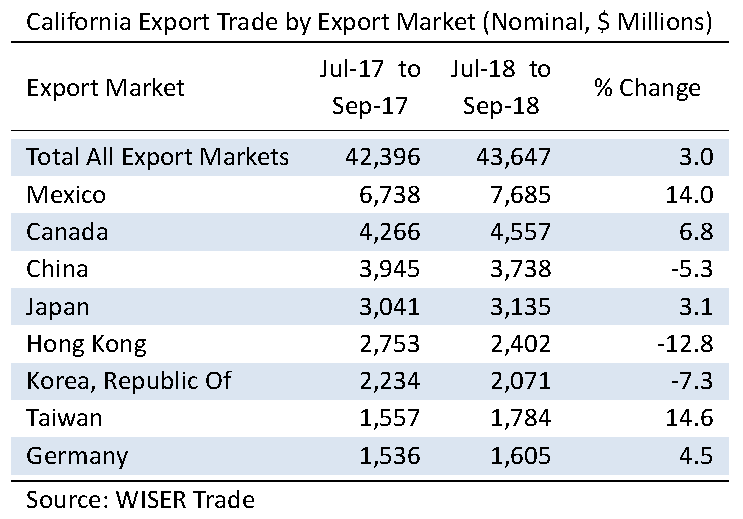 On the minus side, the state’s exports of Transportation Equipment (automobiles, trucks, trains, boats, airplanes, and their parts) fell by 7.2% to $4.55 billion from $4.9 billion. The chief culprit was a very precipitous drop in exports of motor vehicles to China. Exports of agricultural commodities fell by 7.7% to $2.7 billion from $2.93 billion, as shipments of fruits, nuts, wines, and dairy products all faced higher tariffs abroad.

Mexico continued as California’s top export market during the year’s third quarter. Shipments to south of the border grew by 14% to $7.68 billion from $6.74 billion.

Canada claimed second place among the state’s leading export markets by increasing purchases of California products by 6.8% to $4.56 billion from $4.27 billion. China placed third with $3.74 billion in imports from California, down 5.3% from $3.94 billion. Japan came in fourth with imports of California goods totaling $3.13 billion, a gain of 3.1% over the $3.04 billion it imported during the same quarter a year earlier. Exports to fifth-place Hong Kong dropped by 12.8% to $2.4 billion from $2.75 billion.

California’s stake in the renegotiated North American Free Trade Agreement is evident in the fact that Mexico and Canada together accounted for 28% of California’s entire merchandise export trade in the year’s third quarter, up from a 27% share a year earlier.

The latest three-month period saw 49.1% of the state’s $43.65 billion merchandise export trade depart by air, while waterborne transport carried 25.8% of the outbound trade. The balance of the state’s exports moved overland to Canada and Mexico. 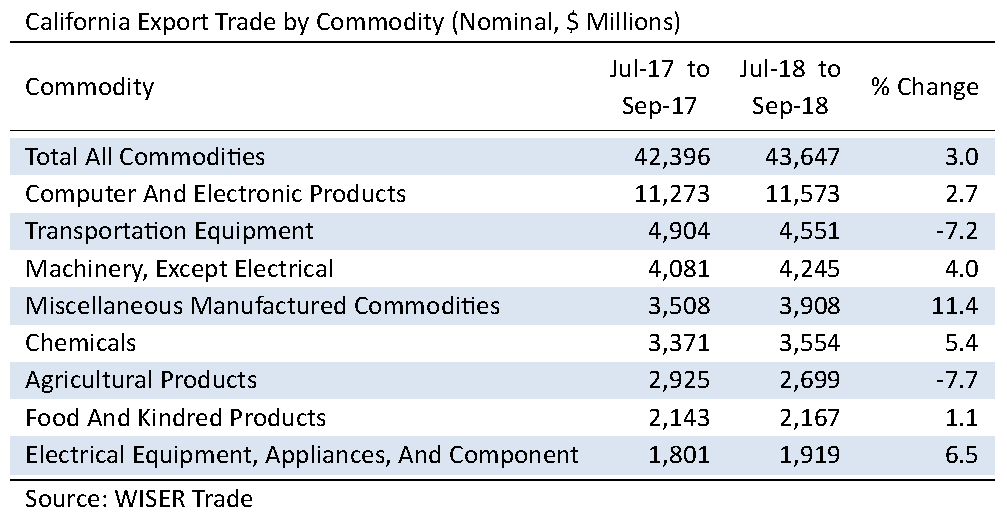 The White House reports that President Donald J. Trump has asked his trade negotiators to produce a set of proposals to take to China’s President Xi when the two leaders meet during the G20 meetings in Argentina at the end of November.

According to Beacon experts, President Trump appears poised to follow through with threats to increase and expand U.S. tariffs on Chinese products on January 1. If imposed, those tariffs will almost certainly be met with retaliatory moves by Beijing.

Beacon experts emphasize that China has thus far exempted a broad range of high-tech products such as semi-conductor manufacturing equipment, aircraft, and pharmaceuticals from higher tariffs. Importing these types of goods is thought to be essential to Chinese plans to advance its own high-tech industries.

Not surprisingly, the latest Census Bureau data indicate that third-quarter exports of aerospace equipment from California to China rose 75.1% over last year. Likewise, shipments of pharmaceutical products from California to China were 34.8% higher in the third quarter than in the same period last year. Industrial machinery shipments to China jumped 87.9% from last year’s third quarter. The implication is that, should the Chinese move to include those products in a new round of tariffs, a broad swath of California industry could be affected negatively.

This prospect comes at a time when overall levels of global trade appear to be slowing. California exports to the European Union, for example, barely increased in the third quarter over the same period last year. Beacon Economics comments that unless constructive measures are taken to resolve current trade disputes between the United States and its key trading partners, Beacon is not sanguine about the prospects for California’s export trade as the current year ends. 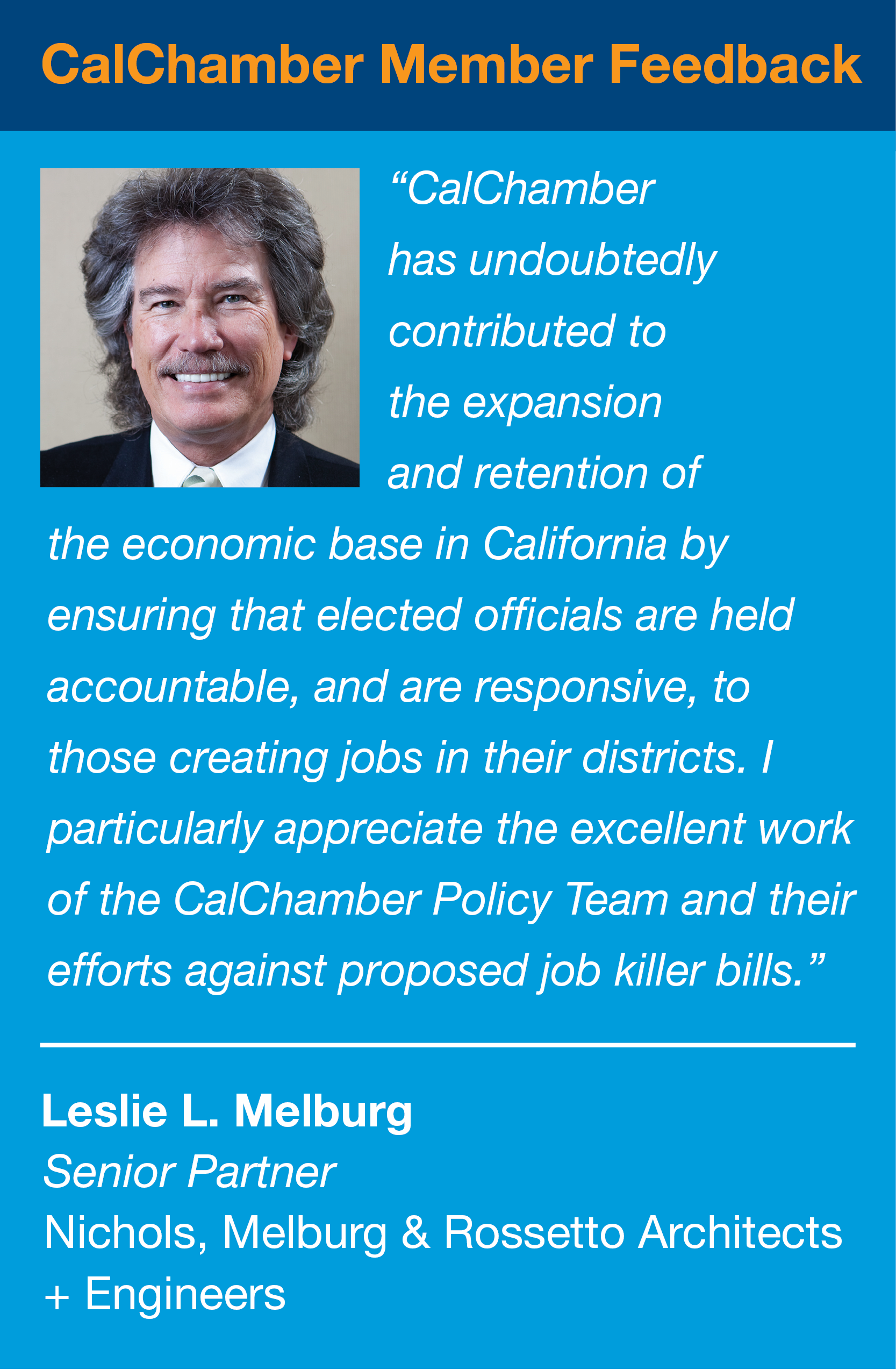