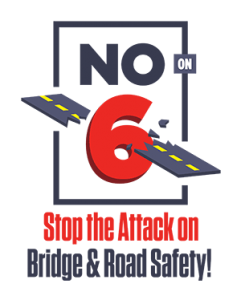 Newspapers throughout California are urging voters to say “no” to Proposition 6 on the November General Election ballot because it seeks to cut off funding designated for road repairs and public transportation by repealing the taxes and fees in a 2017 transportation law.

This initiative would repeal all the transportation taxes adopted by the Legislature in 2017, including higher gasoline and diesel excise taxes, a new tax on vehicles, and a new tax on zero-emission vehicles. The measure also would require any future legislatively imposed taxes on fuels and vehicles to take effect only upon a statewide vote of the people.

The CalChamber Board of Directors voted to oppose the measure because repealing the gas tax would:

Bakersfield Californian: We recommend: Fix our roads, deliver clean, abundant water. “The increases are expected to generate about $5 billion a year. In June, California voters passed Proposition 69, which restricts the way that funding can be spent: It may only go toward road and transportation projects.” September 30, 2018

Monterey Herald/Santa Cruz Sentinel: Prop. 6 would put traffic solutions in reverse. “We strongly urge voters to reject this political ploy that would end up costing every California motorist far more than the relatively slight uptick in the cost of gasoline. Vote no on Proposition 6.” September 29, 2018

Ventura County Star: Vote no on Prop. 6 and yes for roads. “California’s economy and population depend on a strong highway and road network, and many projects will not be funded if Prop. 6 passes. The state gas tax increases were the first in 23 years. They are a fair form of user fee — those who drive the most pay the most. And under Proposition 69, approved by state voters in June, the new revenue cannot be diverted to other uses. With this safeguard in place and a huge need for road improvements in our state, we again urge a no vote on Prop. 6.” September 29, 2018

Los Angeles Times: It’s hard to overstate how destructive Proposition 6 would be for California. Vote no. “Infrastructure isn’t cheap, and Californians will pay the price no matter what. Delaying maintenance only makes the work more expensive later on and the system more dangerous. Or we can pay a little more at the gas pump now for a smoother, safer and more efficient transportation system. Take the responsible road and vote no on Proposition 6.” September 22, 2018

The Sacramento Bee: Hating Caltrans isn’t a good enough reason to repeal the gas tax. “No one likes to pay more at the pump. But seriously tackling our state’s $130 billion backlog of highway and bridge maintenance and upgrades takes a significant, separate source of revenue. And these taxes and fees are the fairest method because those who use roads most are paying the most.” September 21, 2018

The San Diego Union-Tribune: Proposition 6: Vote no because gas tax-funded improvements are much-needed. “The San Diego Union-Tribune Editorial Board encourages a no vote on Proposition 6. The protections meant to ensure funds are used properly — for road and transit improvements — are substantive. And it’s obvious that the state has an immense backlog of transportation renovations that are needed to keep our economy strong.”  September 21, 2018

East Bay Times: To preserve funds for roads, transit, vote no on Prop. 6. “So, in sum, Prop. 6 misses the mark on two counts: It reverses badly needed funding for roads and transportation, and it imposes unnecessary restrictions on future fuel and car taxes. For either or both reasons, voters should say no.” September 4, 2018

San Francisco Chronicle: No on Proposition 6 – cynical political ploy would destroy California’s roads. “Roads, highways and traffic congestion are among Californians’ top complaints about quality of life in this state. So it’s critical for voters to understand how destructive Proposition 6, a November ballot initiative to repeal last year’s gas tax increase, could be for each and every motorist.” August 29, 2018

The Modesto Bee: Passing Prop 6 will cost us more than a few extra pennies at the pump. “Keep all those bad roads, the bad air, delayed emergency responses and disappearing commuter trains in mind when Nov. 6 rolls around and vote no on Proposition 6.”  August 2, 2018