California’s export trade grew in September, according to a Beacon Economics analysis of U.S. trade statistics released November 3 by the U.S. Census Bureau.

Foreign shipments by California businesses totaled $14.19 billion for the month, a nominal 4.0% increase over the $13.65 billion recorded in September 2016.

California accounted for 10.9% of the nation’s overall merchandise export trade in September. Through the first nine months of 2017, the state’s exports are running 5.5% ahead of last year. 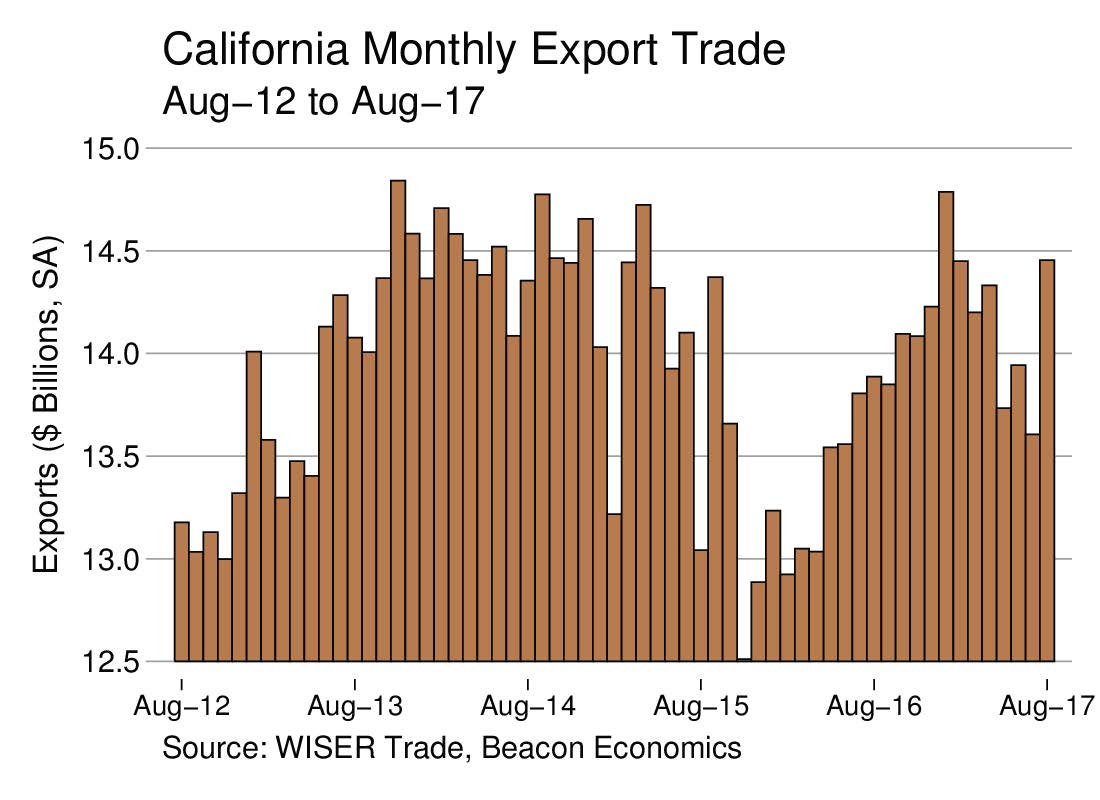 For that reason, Beacon Economics compares the latest three months for which data are available (i.e., July–September) with the corresponding period one year earlier. 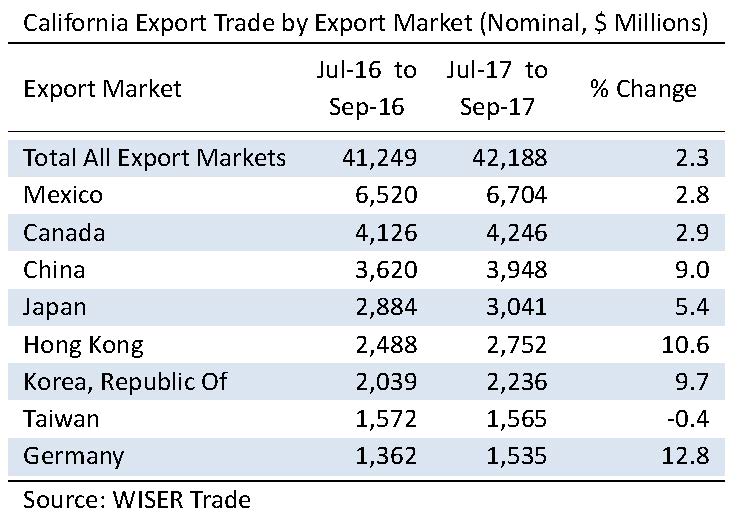 California’s merchandise exports during the year’s third quarter totaled $42.19 billion, a nominal gain of 2.3% from the $41.25 billion in the same period last year. Of the state’s 10 leading categories of exports, eight saw increases.

The plus-side list was topped by shipments of Computer & Electronic Products (computers and peripherals; communication, audio, and video equipment; navigational controls; and electro-medical instruments), which rose 2.5% to $11.27 billion from $11 billion. The state’s exports of Transportation Equipment (automobiles, trucks, trains, boats, airplanes, and their parts) fared even better, increasing by 6.9% to $4.73 billion from $4.42 billion.

Exports of Non-Electrical Machinery (machinery for industrial, agricultural and construction uses as well as ventilation, heating, and air conditioning equipment) roared ahead by 10.9% to $4.08 billion from $3.68 billion. Shipments of Miscellaneous Manufactured Commodities (a catchall category of merchandise ranging from medical equipment to sporting goods) nudged up 1.5% to $3.51 billion from $3.46 billion.

Exports of Primary Metal Manufacturing products tumbled by 57.4%, falling to $758 million from $1.78 billion. Joining the billion dollar a quarter club was Waste & Scrap exports, which jumped 23.4% to 1.05 billion from $852 billion one year ago. 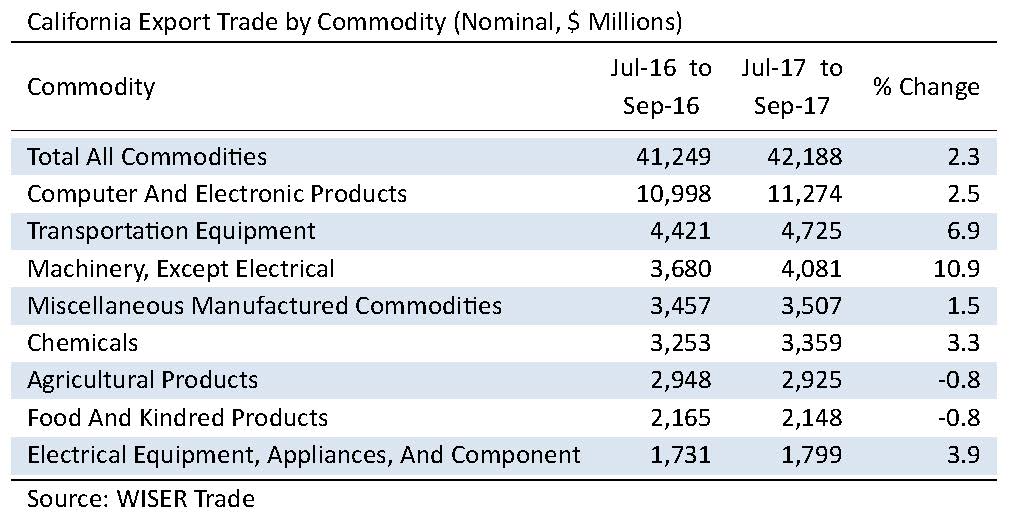 Due mainly to a massive year-over-year fall-off in exports to Vietnam, the state’s export trade with the economies of East Asia expanded by just 0.8% to $15.38 billion from $15.26 billion. By comparison, California’s exports to the European Union rose 9% to $7.92 billion from $7.27 billion.

Mexico and Canada, America’s partners in the North American Free Trade Agreement, accounted for 26% of California’s merchandise export trade in the latest three-month period, up from 25.8% one year ago.

During the most recent three months, 49.4% of the state’s $42.19 billion merchandise export trade went by air, while waterborne transport carried  27.7% of the outbound trade. The balance of exports traveled overland to Canada and Mexico.

Beacon Economics estimation of the near-term outlook for California exporters remains positive, although they do remain troubled by the longer-term impact of pending shifts in the direction of U.S. trade policy.

One definite concern is the future of the North American Free Trade Agreement (NAFTA). With Mexico and Canada accounting for just over one-fourth of California’s merchandise exports, the pact’s renegotiation process is disconcerting as is the lack of progress on resolving key disputes.