According to Beacon Economics’ analysis of U.S. trade statistics released August 4, foreign shipments by California businesses totaled $15.06 billion for the month, a nominal 2.8% increase over the $14.65 billion recorded in June 2016. By comparison, overall U.S. exports were up 6.4%.

California accounted for 11.1% of the nation’s overall merchandise export trade. Through the first half of 2017, the state’s exports are running 7.1% ahead of last year.

The U.S. Department of Commerce has determined that California was the state-of-destination for 18.4% of all U.S. merchandise imports in June, with a value of $37.24 billion, 7.8% higher than the $34.55 billion in imported goods in June 2016. 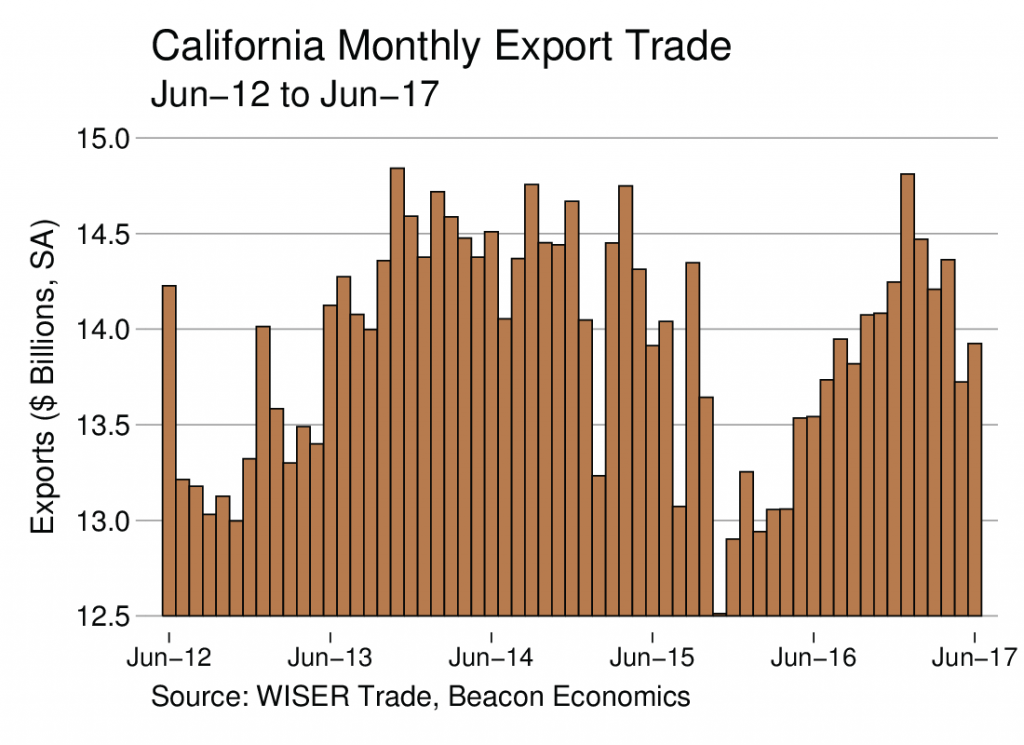 As always, Beacon Economics cautions against reading too much into month-to-month fluctuations in state export statistics, especially when focusing on specific commodities or destinations. Significant variations can occur as the result of unusual developments or exceptional one-off trades and may not be indicative of underlying trends. For that reason, Beacon Economics compares the latest three months for which data are available (i.e., April–June) with the corresponding period one year earlier.

California’s merchandise exports during the year’s second quarter totaled $42.63 billion, a nominal gain of 4.5% from the $40.80 billion in the same month last year. Seven of the ten leading categories of exports saw increases.

On the plus side, California’s merchandise exports during the year’s second quarter totaled $42.63 billion, a nominal gain of 4.5% from the $40.80 billion in the same month last year. Seven of the 10 leading categories of exports saw increases.

The state’s exports of transportation equipment (automobiles, trucks, trains, boats, airplanes, and their parts) fared better, increasing by 3.9% to $4.85 billion from $4.67 billion.  Exports ofnonelectrical machinery (machinery for industrial, agricultural and construction uses as well as ventilation, heating, and air conditioning equipment) roared ahead by 22.1% to $4.27 billion from $3.50 billion. 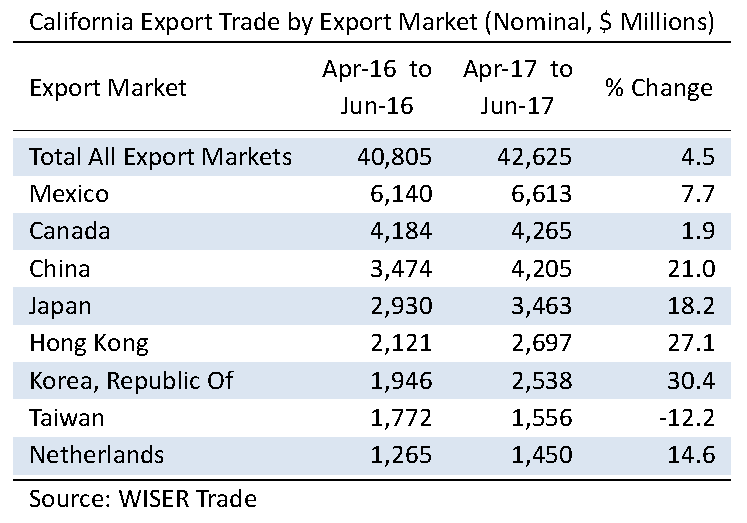 On the downside, shipments of miscellaneous manufactured commodities (a catchall category of merchandise ranging from medical equipment to sporting goods) slipped 3.0% to $4.11 billion from $4.24 billion.

Chemical exports (including pesticides and fertilizers; pharmaceutical products; paints and adhesives; soap and cleaning products; and raw plastics, resins, and rubber) also declined by 4.5% to $3.26 billion from $3.41 billion. Exports ofprimary metal manufacturing products were off by 5.4%, falling to $931 million from $984 million.

Mexico stayed atop the list of California’s most important export destinations during the last quarter, aided by a sharp recovery of the peso from early year lows. Shipments south of the border grew by 7.7% to $6.61 billion from $6.14 billion.

Canada retained its traditional status as California’s second largest export market during the latest three-month period with shipments valued at $4.17 billion, a slight 1.9% bump from $4.18 billion during the same period last year.

Mexico and Canada, America’s partners in the North American Free Trade Agreement, accounted for 25.5% of California’s merchandise export trade in the latest three-month period. Exports to the two U.S. neighbors nudged up a combined 5.4% to $10.88 billion from $10.32 billion one year earlier. California’s merchandise export to India gained 1.0% in the latest quarter to $1.31 billion. Meanwhile, state exports to Russia climbed by 46.8% to $140 million.

By mode of transport, 49.6% of the state’s $42.63 billion merchandise export trade during the most recent three months went by air, while waterborne transport carried 27.0% of the outbound trade. The balance of exports traveled overland to Canada and Mexico. Despite the considerable public attention for containerized trade through the Ports of Los Angeles, Long Beach, and Oakland, just 19.4% of the value of California’s merchandise trade in the latest quarter sailed on a “box ship.”

The balance of exports traveled overland to Canada and Mexico. 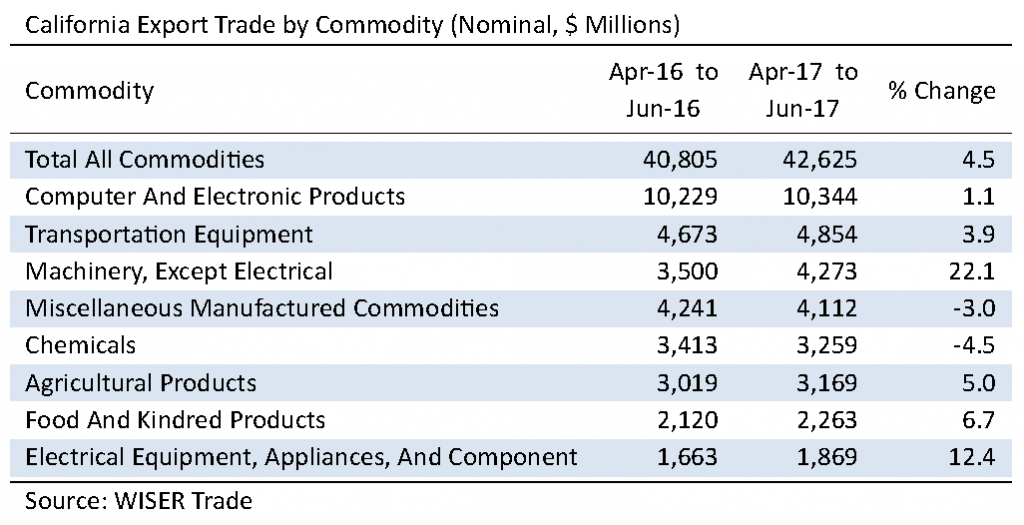 The near-term outlook for California exporters remains quite positive, according to Beacon experts.

Economic conditions abroad are brightening for the most part, while the value of the dollar continues to drift lower against most major currencies (making California and other U.S. goods cheaper for foreigners to buy).

On the other hand, the Trump administration appears to be gearing up for major trade policy confrontations with a host of America’s largest trading partners, most prominently China, Japan, South Korea, Germany, Canada, and Mexico—countries that account for half of California’s merchandise export trade. Still, Beacon experts say they would be surprised if the White House were to announce any specific actions until later this year, at the earliest.

The Beacons report concludes: “All of the rhetorical saber rattling over trade policy takes place against the backdrop of actual saber rattling in the Far East. Looking out across the Pacific, we see an already-tense situation on the Korean peninsula that is edging closer and closer to confrontation, while… U.S. naval forces contend with increasingly belligerent steps by China to consolidate its territorial claims in the South China Sea. A severe disruption of transpacific trade could be the least consequential result of any missteps on either front.” 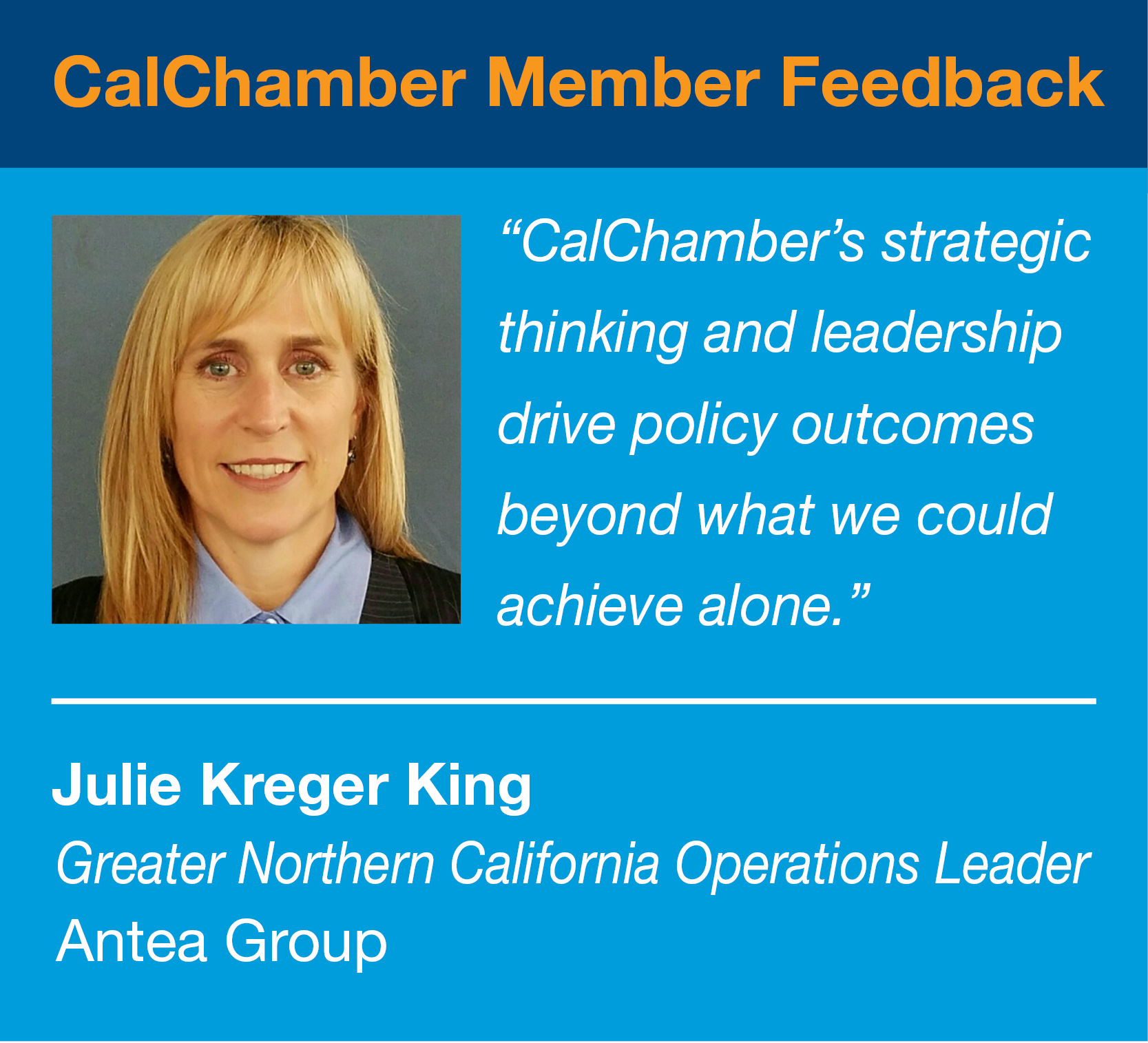