California’s exporters maintained their strong performance in 2017 by posting impressive gains in April, according to a recent Beacon Economics trade report.

According to Beacon Economics’ analysis of U.S. trade statistics released June 5, foreign shipments by California businesses totaled $14.07 billion for the month, a 9.6% increase over the $12.84 billion recorded in April 2016. Through the first four months of 2017, the state’s export trade is running 9.9% ahead of last year.

By way of comparison, the nominal value of overall U.S. merchandise exports in April moved up by 6.3%.

California accounted for 11.1 % of the nation’s overall merchandise export trade. The gains were reflected in the increased volume of outbound traffic at the state’s principal international trade gateways. Airborne export tonnage from LAX and SFO was up 13.3% from last April, while the number of outbound loaded containers sailing from the Ports of Los Angeles, Long Beach, and Oakland rose by 4.8% over April 2016. 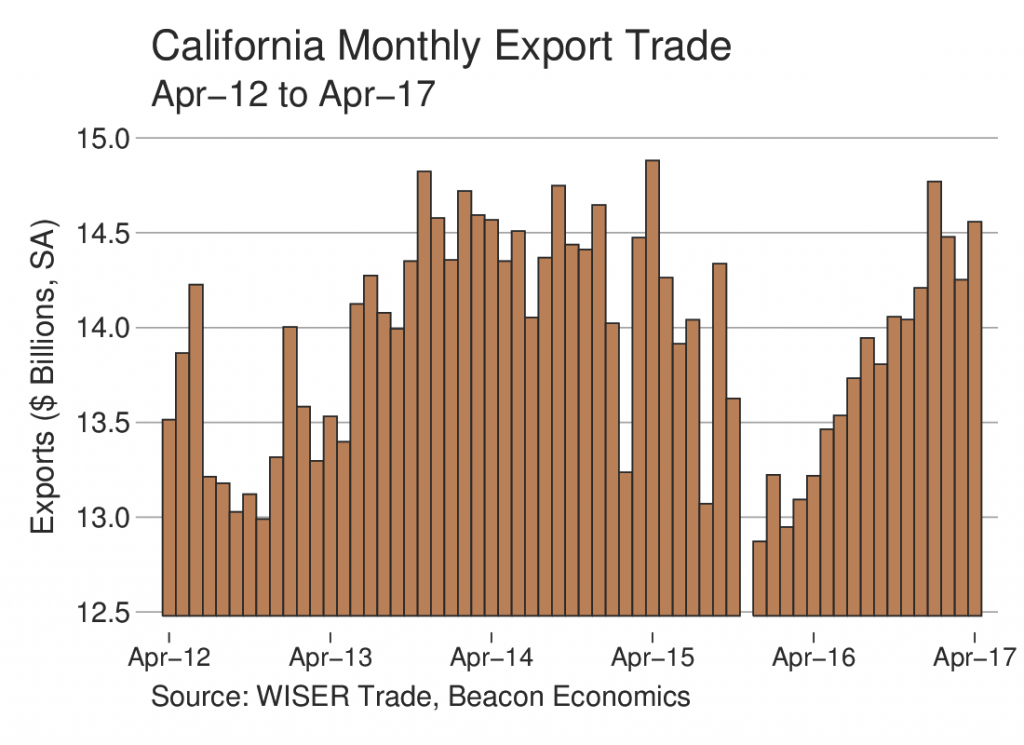 As always, Beacon Economics cautions against reading too much into month-to-month fluctuations in state export statistics, especially when focusing on specific commodities or destinations. Significant variations can occur as the result of unusual developments or exceptional one-off trades and may not be indicative of underlying trends. For that reason, Beacon Economics compares the latest three months for which data are available (i.e., February-April) with the corresponding period one year earlier.

California’s merchandise exports during the latest three-month period totaled $42.44 billion, a nominal gain of 9.7% from the $38.68 billion in the same months last year.

Eight of the 10 leading categories of exports saw increases. On the plus side, the list was topped by shipments of Computer & Electronic Products (computers and peripherals; communication, audio, and video equipment; navigational controls; and electro-medical instruments), which grew by 3.6% to $10.56 billion from $10.19 billion.

The state’s exports of Transportation Equipment (automobiles, trucks, trains, boats, airplanes, and their parts) leapt by 21.8% to $5.02 billion from $4.12 billion. Exports of Non-Electrical Machinery (machinery for industrial, agricultural and construction uses as well as ventilation, heating, and air conditioning equipment) likewise soared by 20.5% to $4.24 billion from $3.52 billion. 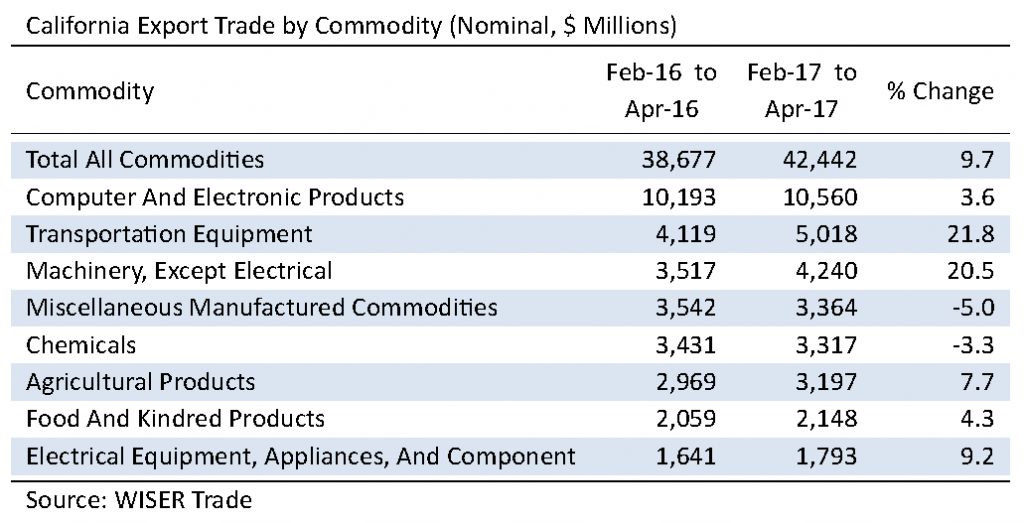 Trending lower were exports of Miscellaneous Manufactured Commodities (a catchall category of merchandise ranging from medical equipment to sporting goods), which slipped lower by 5.0% to $3.36 billion from $3.54 billion. Chemical exports (including pesticides and fertilizers; pharmaceutical products; paints and adhesives; soap and cleaning products; and raw plastics, resins, and rubber) also declined, falling 3.3% to $3.32 billion from $3.43 billion.

Mexico remained California’s most important export destination during the last three months, despite anxieties over the future of the North American Free Trade Agreement (NAFTA). Shipments south of the border edged up 2.2% to $6.20 billion from $6.07 billion. Exports to China jumped 20.2% to $4.04 billion from $3.59 billion. In third place was Canada, which took in $3.87 billion in California exports, off 0.7% from $3.89 billion last year. In fourth place was Hong Kong, which saw its imports from California soar by 93.4% to $3.51 billion from $1.87 billion. Japan ranked fifth, importing $3.41 billion in goods from California, up by 19.9% from $2.85 billion a year earlier. South Korea, up 22.5% to $2.48 billion from $2.03 billion, rounded out the list of foreign markets importing at least $2 billion in merchandise from California during the last three months.

The state’s export trade with the economies of East Asia leapt by 25.1% to $16.63 billion from $13.30 billion. By comparison, California’s exports to the European Union moved up by 7.0% to $7.97 billion from $7.45 billion. Mexico and Canada, America’s partners in NAFTA, accounted for 23.7% of California’s merchandise export trade in the latest three-month period. Exports to our two neighbors nudged up a combined 1.1% to $10.07 billion from $9.86 billion one year earlier.

By mode of transport, 49.7% of the state’s $42.44 billion merchandise export trade during the most recent three months went by air, while waterborne transport carried 28.4% of the outbound trade. The balance traveled overland to Canada and Mexico. 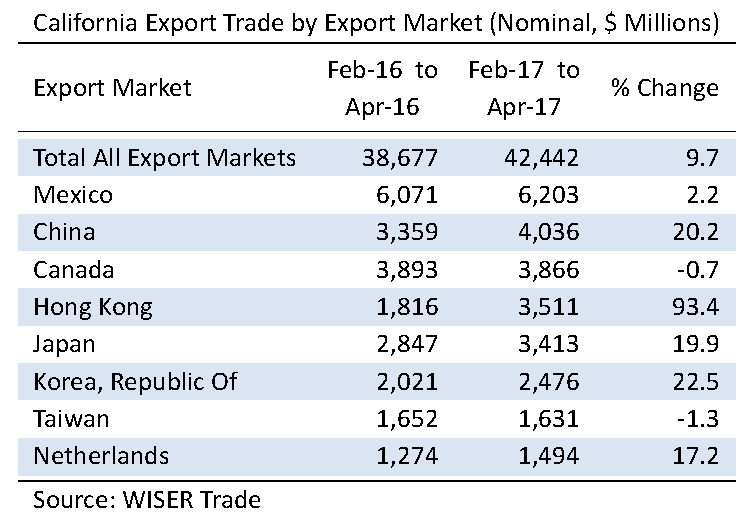 The economic outlook abroad continues to look favorable for California exporters. China’s economy is expanding, and growth prospects in much of Europe are improving. And, although the process of renegotiating the terms of NAFTA are formally underway, there appears little reason to expect that U.S. trade with Mexico and Canada will be disrupted, at least in the short-term.

According to Beacon Economics experts, for California and other states whose industries are closely linked to the economies of the Far East, the main concern right now lies with the security threat posed by North Korea and the danger it presents to trans-Pacific trade.