The California economy remains on track despite the uncertainty created by the disruptive political environment that has characterized the early months of the Trump administration, according to a recent report by the California Chamber of Commerce Economic Advisory Council.

California’s real GDP in all of 2016 grew 2.9% in yearly terms compared to the nation’s 1.5% rate over that period. In general, the pace of economic growth in both California and the United States was slower in 2016 than in 2015, but should speed up this year.

California continues to get significant contributions from the tech-related sectors (Information, together with Professional, Scientific and Technical Services), Health Care, with noteworthy contributions from Construction and Durable Goods Manufacturing.

The state has continued to experience steady but somewhat slower job growth as it has entered 2017. 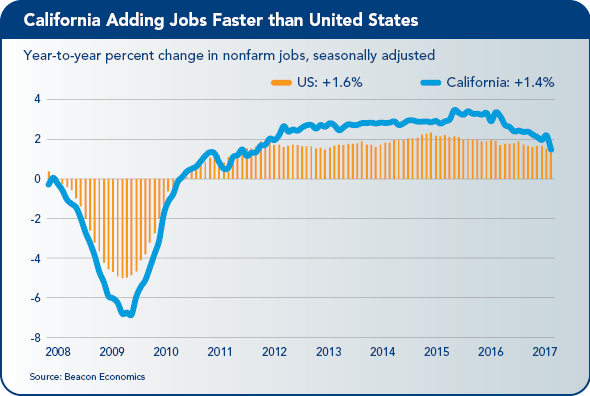 The picture for California housing continues to be mixed. In general, prices have advanced modestly despite less-than-normal circumstances that have limited sales activity. Aside from the San Francisco Bay Area, home prices have yet to surpass their pre-recession peaks.

On the demand side, strong demographics, job and income growth, and low interest rates should be driving sales. However, would-be buyers face impediments in the form of limited inventories, high underwriting standards, and large down payment requirements.

The outlook for housing in 2017 should improve. With growing incomes, more households will seemingly be in a position to become homeowners. Moreover, the expectation of higher interest rates should get some would-be buyers off the fence. Whether this sparks heightened activity on the supply side remains to be seen.

On the rental side, rent burdens (rent as a share of income) have been rising, elevating concerns about affordability around the state to their highest levels in over a dozen years. 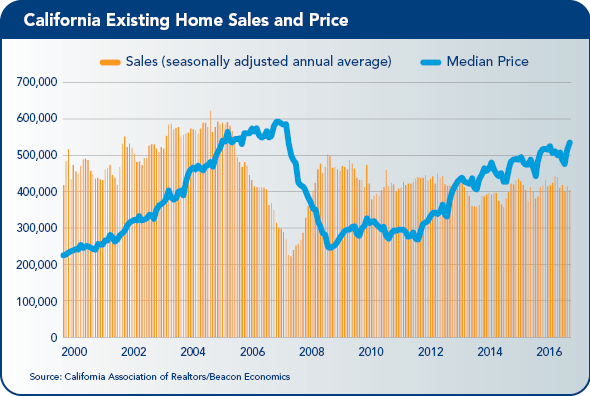 All in all, the outlook for the U.S. economy in 2017 may be summarized in one number: 2! That is, GDP growth of about 2%, job growth of just under 2%, and inflation running at about 2%…at least through the end of this year and possibly into 2018.

The U.S. economy may have gotten off to a slow start as far as quarterly gross domestic product (GDP) is concerned with annualized quarterly growth of 0.7%, but the year-to-year growth figure of 1.9% is a better reflection of the general trend and is very much in line with the trajectory of the economy over the past few years.

Similarly, wage and salary job growth may be a bit lower than last year at 1.6% year over year, but this is largely due to the fact that the economy has reached full employment, hence adds jobs at a slower pace.

From its opening salvo of backing out of the Trans-Pacific Partnership (TPP), to repeated efforts to enact a travel ban, and other measures to cut regulations, actions by the administration inevitably affect California businesses and must be monitored for their potential implications.

Business leaders have their work cut out as they try to navigate terrain that has been made more uncertain by the current state of affairs in Washington, D.C.

It will take time for policy changes in D.C. to work their way through the political process. As such, California and its regions should experience continued growth in economic activity and jobs throughout 2017, with the largest contributions to employment coming from Health Care, Leisure and Hospitality, Construction, and Professional Services.

Meanwhile, California must deal with its own home-grown issues. In addition to housing affordability concerns, the state must face up to long-run water problems, even though the precipitation of recent months has ended years-long severe drought conditions in the state.

More generally, California must find ways to address and finance its infrastructure needs to support a growing state economy in the decades ahead.