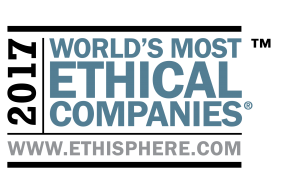 Thirty-one California Chamber of Commerce member firms are among the 124 named as the 2017 World’s Most Ethical Companies by the Ethisphere Institute.

The institute, a global leader in defining and advancing the standards of ethical business practices, said the honorees span five continents, 19 countries and 52 industry sectors.

Three CalChamber members are among the 13 companies that have been recognized all 11 times since Ethisphere started the list in 2007.

Ethisphere describes its program as one that has honored companies “who recognize their role in society to influence and drive positive change in the business community and societies around the world. These companies also consider the impact of their actions on their employees, investors, customers and other key stakeholders and leverage values and a culture of integrity as the underpinnings to the decisions they make each day.”

Ethisphere CEO Timothy Erblich explains that over the last 11 years “we have seen an impressive shift in societal expectations, aggressive emergence of new laws and regulation and geopolitical swings that can further disrupt the balance.

“We have also seen how companies honored as the World’s Most Ethical respond to these challenges. They invest in their local communities around the world, embrace strategies of diversity and inclusion and focus on long term-ism as a sustainable business advantage. In short, these companies are transformative, not just out of need, but because they recognize that integrity is the key to their advancement.”

The World’s Most Ethical Company assessment is based upon the Ethisphere Institute’s Ethics Quotient® (EQ) framework, which offers a quantitative way to assess a company’s performance in an objective, consistent and standardized way. The information collected provides a comprehensive sampling of definitive criteria of core competencies, rather than all aspects of corporate governance, risk, sustainability, compliance and ethics.

The EQ questionnaire is developed by an Ethisphere internal team of legal and compliance professionals and an advisory panel. Members include leading experts from the fields of law, corporate reputation, corporate ethics, governance, anti-corruption, and government.

The full list of the 2017 World’s Most Ethical Companies can be found at worldsmostethicalcompanies.ethisphere.com/honorees/.

Best practices and insights from the 2017 honorees will be released in a series of infographics and research throughout the year. Organizations interested in how they compare to the World’s Most Ethical Companies are invited to participate in the Ethics Quotient.