California’s merchandise export trade started 2017 with an exceptionally strong showing in January, posting a nominal 10.9% gain over the same month in 2016, according to a recent Beacon Economics trade report.

According to the Beacon Economics analysis of U.S. trade statistics released March 7 by the U.S. Census Bureau, foreign shipments by California businesses totaled $13.27 billion for the month, a robust increase over the $11.96 billion recorded in January 2016. 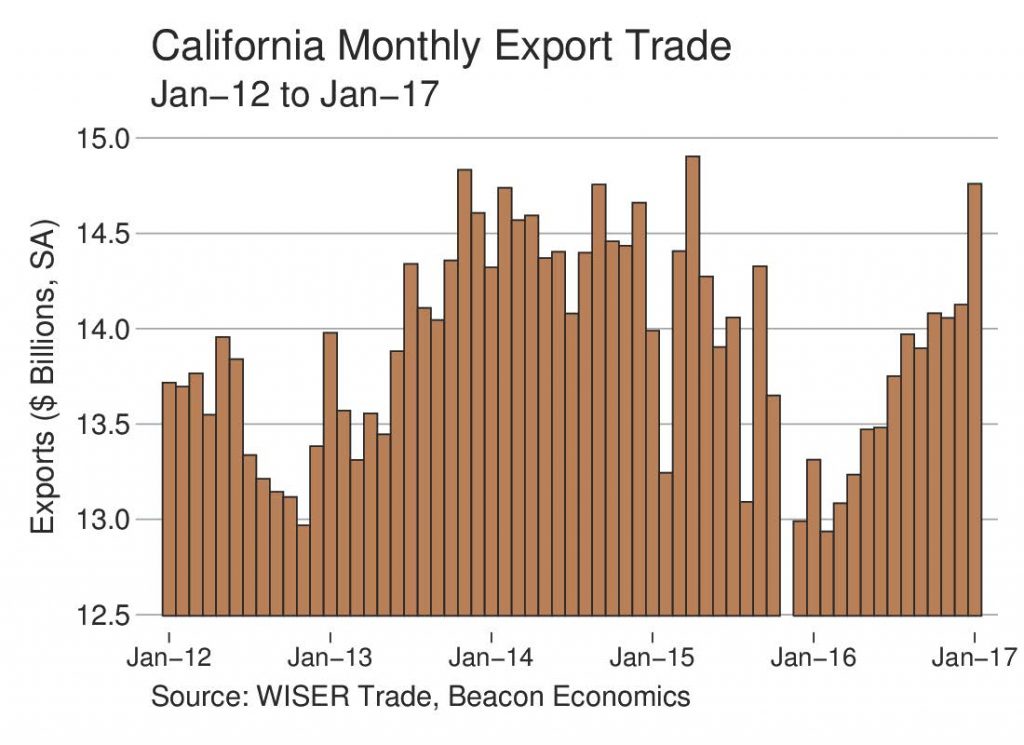 Exports to California’s major trading partners in the Far East saw a sharp 19.5% year-over-year increase in January, while shipments to European Union countries were 6.3% higher. Exports to Mexico, California’s leading export market, were up 8%. while exports to Canada (California’s No. 2 export destination) jumped by 22.3%.

The gains were reflected in the increased volume of outbound traffic at the state’s principal international trade gateways. Airborne export tonnage from LAX increased 11.4% year-over-year in January, while the number of outbound loaded containers sailing from the Ports of Los Angeles, Long Beach and Oakland rose by 17.9% over January 2016.

For that reason, Beacon Economics compares the latest three months for which data are available (that is, November–January) with the corresponding period one year earlier. That analysis shows that California’s merchandise exports totaled $43.66 billion, a $3.31 billion (8.2%) increase over the same period last year.

California’s merchandise exports during the latest three-month period totaled $41.72 billion, a nominal gain of 10.8% from the $37.65 billion in the same period last year. 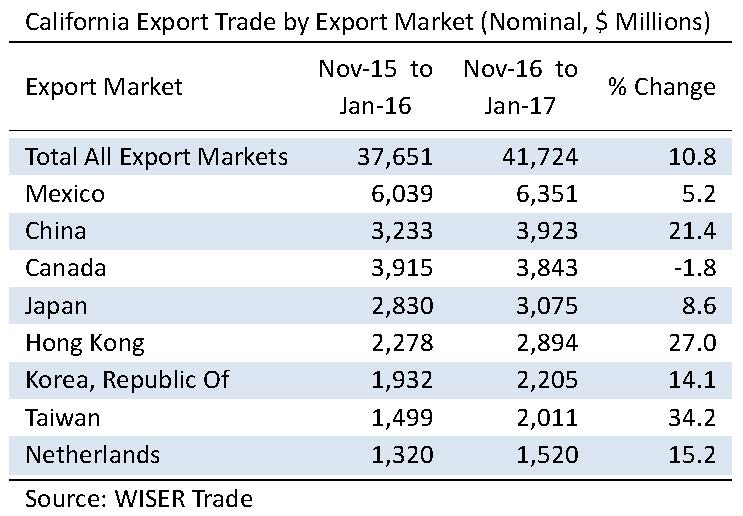 Nine of the 10 leading categories of exports saw increases. On the plus side, the top export category—of Computer & Electronic Products (computers and peripherals; communication, audio, and video equipment; navigational controls; and electro-medical instruments) — grew by 5.0% to $10.74 billion from $10.23 billion.

The state’s exports of Transportation Equipment (automobiles, trucks, trains, boats, airplanes, and their parts) leaped by 23.1% to $4.97 billion from $4.04 billion.  Exports of Non-Electrical Machinery (machinery for industrial, agricultural and construction uses as well as ventilation, heating, and air conditioning equipment) likewise soared by 21.9% to $3.96 billion from $3.25 billion.

The one sour note was a 0.2% slip in exports of Chemical products (including pesticides and fertilizers; pharmaceutical products; paints and adhesives; soap and cleaning products; and raw plastics, resins, and rubber) to $3.17 billion from $3.18 billion. 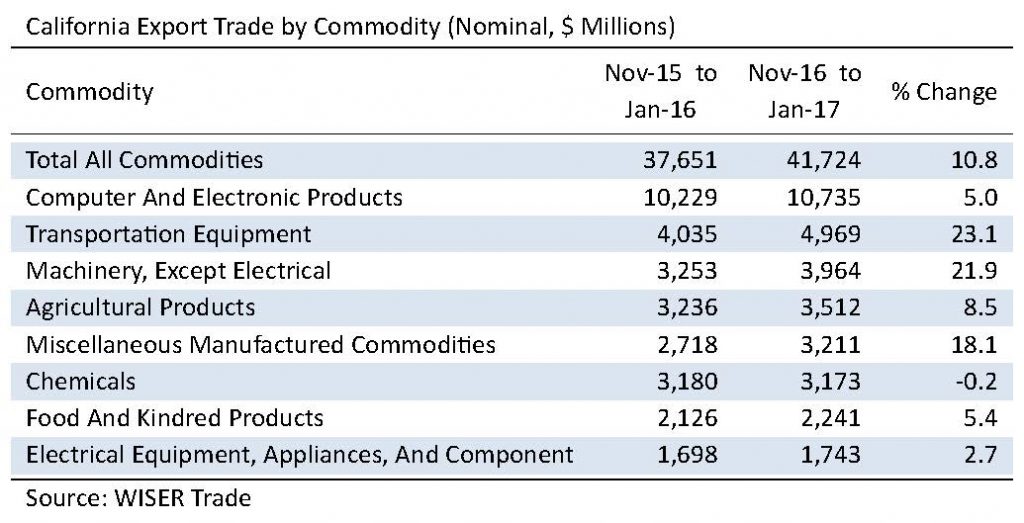 Mexico and Canada, America’s partners in the North American Free Trade Area, accounted for 24.4% of California’s merchandise export trade in the latest three-month period. Exports to our two neighbors rose a combined 2.4% to $10.19 billion from $9.95 a year earlier. By mode of transport, 47.8% of the state’s $41.72 billion merchandise export trade during the most recent three months went by air, while waterborne transport carried 30.5%. The balance travelled overland to Canada and Mexico.

Per Beacon Economics,  a purely economic forecast for California’s export trade through 2017 would be optimistic. The Trump administration has postured on trade policy but to date has been thin on specifics. Announcements and comments made by President Donald Trump and his advisers regarding proposed changes in trade policy mainly add uncertainty to the economic outlook and the global trade situation at a time of slow but steady improvement in the economies of the U.S. and its trading partners.

The President’s 2017 Trade Policy Agenda, released on March 1, specifically targets China, South Korea, Mexico, and Canada. In other venues, the President has claimed that Japan has taken unfair advantage of U.S. interests. Those countries are all primary export markets for California goods.

According to the Beacon Economics experts, should the Trump administration make good on some of its promises surrounding trade, it will do so on the backs of U.S. (and California) consumers and businesses.