California’s budget remains precariously balanced, California Department of Finance Director Michael Cohen explained yesterday during a luncheon at the California Chamber of Commerce. Highlights of the presentation are included in the latest CalChamber Capitol Report video.

“Our revenue forecast, compared to what we thought when the Governor signed the budget in June, the 2016 budget, is down by 5.8 billion dollars,” Cohen said.

To reflect this lower expectation of revenue growth, the proposed budget contains $3.2 billion in solutions.

The Governor also proposed increasing increase the state’s Rainy Day Fund to $7.9 billion, which is 73% of its constitutional target.

Tide of Revenues Has Begun to Turn

While indicating that revenue growth is lower than anticipated even six months ago, Cohen explained, “This is not a recession, this is not a sort of stopping of our economic growth, like some other places in the world. The economy is still expanding…”

But revenue growth nonetheless has been disappointing compared to expectations.

“This has been across the board on all three taxes—the sales tax, the corporate tax, and the personal income tax,” Cohen said.

It’s been seven months since the budget was signed and the data from five of those months has been below expectations, Cohen remarked. In June and December, the two months when the state receives personal income tax estimated payments, revenue has lagged. Cohen noted that personal income tax makes up 70% of the General Fund revenue.

“When [personal income revenue] lags, it shouldn’t be surprising that our revenue expectations are being lowered,” Cohen said.

Cohen explained that the administration is tempering spending growth now, rather than cutting existing programs, in an effort to minimize the negative effects on Californians.

Cohen explained that entire budget was put together assuming the continuation of current federal fiscal policy.

“We all know that the fiscal policy of the federal government when we pass a budget in June is not going to be the same as today,” Cohen stated. “We just don’t know what it’s going to be, and so we didn’t get into the business of trying to predict that and react to proposals that aren’t in legislation.”

While there are proposals that are floating around that could help California, Cohen said, there also are things that could hurt. Cohen promised to wait and see what the future brings.

“Every year we have a May revision which updates the Governor’s budget proposal for the newest and latest information across the board, and any changes in federal fiscal policy in the next few months will be a big piece of that,” he said.

The other major risk California faces is the risk of recession.

“We have to look back at history and note we have a business cycle; we have expansions and contractions, and at this point we are getting closer to being on borrowed time even though the expansion and recovery hasn’t been as robust as many of us would have liked,” he said.

In closing, Cohen pointed out that California has enjoyed a remarkable four-year run of budget surpluses, but that the state must continue its an ongoing balance to keep a budget as big and volatile as California’s still balanced.

“The state budget requires constant maintenance,” Cohen said. “You can’t just say, ‘Oh we’re balanced,’ and walk away from it, particularly if you say we are balanced and you add new financial commitments.”

Cohen said the proposed budget reflects this reality and does its best to hold onto the biggest fiscal achievements that California has had the last few years.

The full summary of the Governor’s budget proposal can be found at www.ebudget.ca.gov 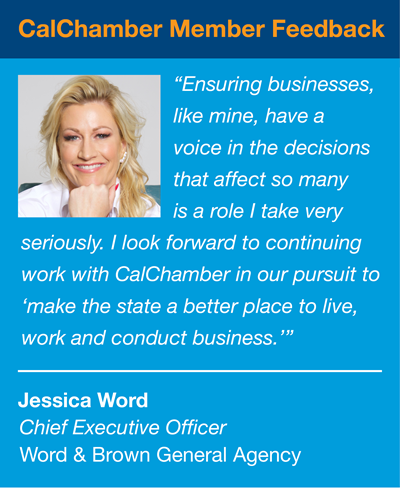