California’s merchandise export trade continued its late-year growth spurt in November by posting a nominal 12.1% gain over the same month one year earlier, according to a Beacon Economics trade report released last week.

The Beacon Economics analysis was based on U.S. trade statistics released January 6 by the U.S. Census Bureau. 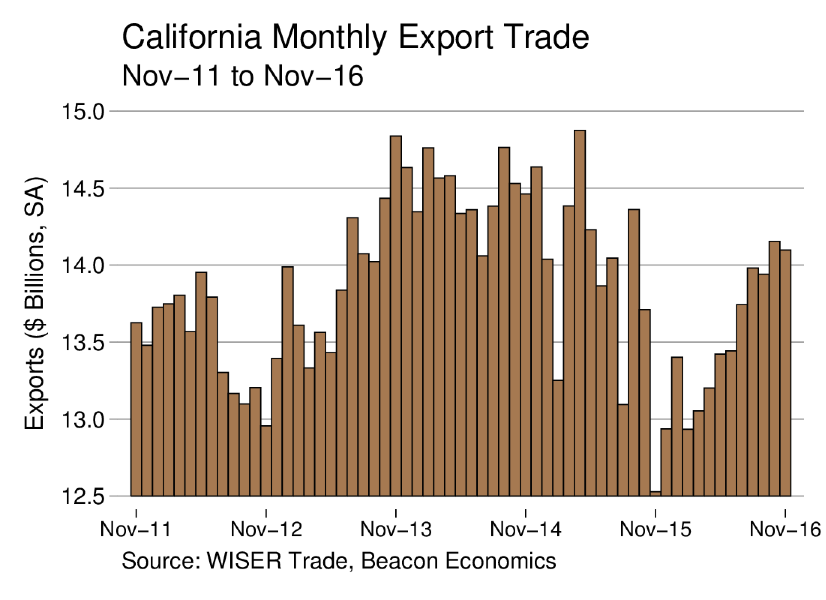 Foreign shipments by California businesses totaled $14.41 billion for the month, a healthy increase over the $12.86 billion recorded in November 2015.

By way of comparison, the nominal value of overall U.S. merchandise exports in November edged up just 2.3%, while exports from Texas gained 2.6% over last November.

Exports to California’s major trading partners in East Asia saw a healthy 17.4% jump in November, while shipments to European Union countries slipped by 1%. Exports to Mexico, California’s leading export market, were up 5.4%. while exports to Canada (California’s No. 2 export destination) fell 5.1%. 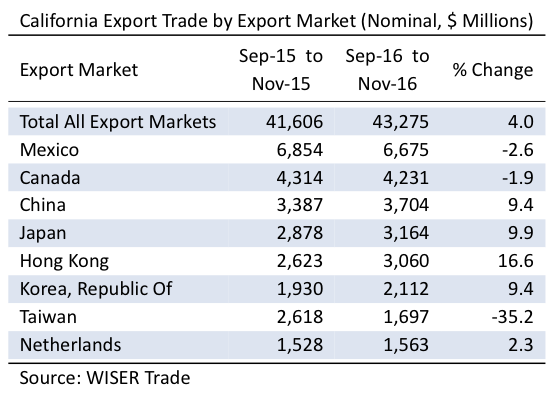 The U.S. Department of Commerce has determined that California was the state of destination for 18.7% of all U.S. merchandise imports in November, with a value of $37.96 billion, up 5.1% from the $36.11 billion in imported goods in November 2015. Manufactured imports totaled $35.02 billion, an increase of 6.4% from $32.91 billion last year. Nonmanufactured imports in November were valued at $2.94 billion, 8.1% lower than the $3.2 billion recorded a year earlier.

As always, Beacon Economics cautions against reading too much into month-to-month fluctuations in state export statistics, especially when focusing on specific commodities or destinations. The report finds significant variations can occur as the result of unusual developments or exceptional one-off trades and may not be indicative of underlying trends. For that reason, Beacon Economics compares the latest three months for which data are available (that is, September–November) with the corresponding period one year earlier.

California’s merchandise exports during the latest three-month period totaled $43.27 billion, a nominal gain of 4% from the $41.61 billion recorded during the same period last year.

On the plus side, exports of Computer & Electronic Products (computers and peripherals; communication, audio, and video equipment; navigational controls; and electro-medical instruments) grew by 3.9% to $11.29 billion from $10.86 billion. The state’s exports of Transportation Equipment (automobiles, trucks, trains, boats, airplanes, and their parts) remained essentially unchanged at $5.08 billion. Exports of Miscellaneous Manufactured Commodities (a catchall category of merchandise ranging from medical equipment to sporting goods) jumped 18.4% to $3.72 billion from $3.14 billion. Exports of Non-Electrical Machinery (machinery for industrial, agricultural and construction uses as well as ventilation, heating, and air conditioning equipment) moved up by 4.9% to $3.66 billion from $3.48 billion.

Chemical exports (including pesticides and fertilizers; pharmaceutical products; paints and adhesives; soap and cleaning products; and raw plastics, resins, and rubber) fell 1.4% to $3.36 billion from $3.4 billion. Agricultural exports were up 14.9% to $4.21 billion from $3.66 billion, while foreign shipments of Food & Kindred goods edged up 0.4% to $2.26 billion from $2.25 billion.

The state’s export trade with the economies of East Asia increased 4.9% to $15.96 billion from $15.22 billion.  By contrast, California’s exports to the European Union moved down by 2.3% to $7.45 billion from $7.63 billion. Mexico and Canada, America’s partners in the North American Free Trade Area, accounted for 25.2% of California’s merchandise export trade in the latest three-month period.

By mode of transport, 46.7% of the state’s $43.27 billion merchandise export trade during the most recent three months went by air, while waterborne transport carried 30.1%. The balance traveled overland to Canada and Mexico. 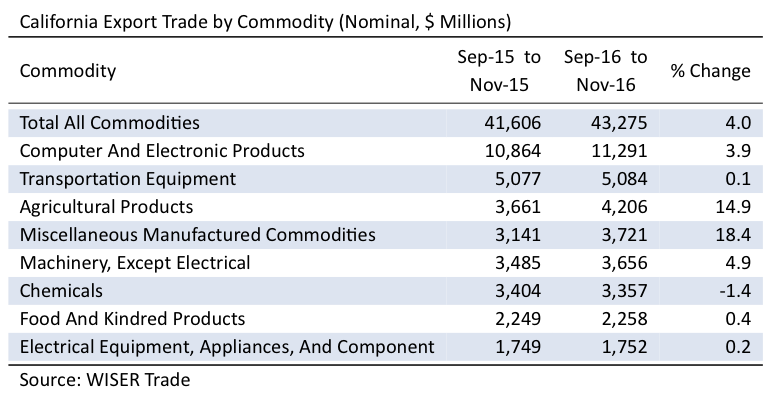 Beacon Economics experts say that prospects for a continuation of harmonious relations with California’s principal trading partners were dealt further setbacks by the appointment of Peter Navarro to head a new National Trade Council and by the nomination of Robert Lighthizer as U.S. Trade Representative. Both have exhibited a “peculiar animus” toward China, and neither is likely to restrain President-elect Donald Trump from pursuing aggressive measures aimed at slashing U.S. merchandise trade deficits with China and Mexico, the report states.

Beacon Economics states that the incoming administration’s focus on the trade deficit with China is “misconstrued and over-wrought. A large portion of what is reported as a deficit with China is really an artifact of economic accounting practices that ignore the foreign content in many goods the U.S. imports from China. Apart from depriving American consumers of a vast array of goods essential to our lifestyles, slamming the door on Chinese imports would increase our trade imbalances with other nations.”

The United States has not consistently run a surplus in its merchandise trade since 1970, and the last surplus was recorded in 1975, says the report. “The country seems to have done rather well since.”