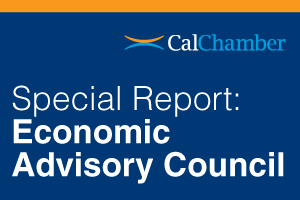 California has stayed on course with a solid economic performance through the first three quarters of 2016 despite slower growth nationally, according to the latest report of the California Chamber of Commerce Economic Advisory Council.

The state outdistanced the nation in terms of economic growth and job creation, although the pace of growth in both California and the United States has been somewhat slower than last year.

Virtually every industry in the state continues to add jobs and the unemployment rate is lower than a year ago. All in all, the statewide economy is poised for continued growth over the next several quarters, outpacing most other states in the nation.

Moreover, virtually every industry in the state continues to add jobs in yearly terms. Health care and social assistance have led the way with the largest absolute job gains in the state. Significant contributions have also come from leisure and hospitality; professional, scientific and technical services; and construction, illustrating the breadth of job gains throughout the private sector of the economy.

The election that put Donald Trump in the White House in 2017 was a shock to the vast majority of pollsters who were predicting a win for Hillary Clinton. The outcome also is a shock to the staff at Beacon Economics whose economic outlook over the last year has implicitly been based on the (incorrectly) predicted outcome of a Clinton win. The Beacon Economics view assumed that her administration would largely continue current White House policies and that, combined with continued political gridlock in Washington, D.C., would reduce the chances of any major policy change.

The outcome of the election changes the outlook, albeit “how” is still an unknown. This will depend greatly on what happens in the first few months of the Trump administration. What is known is that the potential upsides are limited, and the potential downsides are enormous—to the point that there is now a very real probability of a recession over the next two years.

In addition to steady job gains, spending activity statewide, as measured by taxable sales, has been growing steadily over the last few years. Following an increase of more than 4% last year, taxable sales were up by over 2% through the first half of 2016, with the busy holiday season still ahead.

Not unlike the nation, the consumer sector accounts for most of the spending activity in the state.

Regional economies across the state have grown over the last several quarters, with job gains that have varied from location to location.

In reality, the United States still offers its citizens one of the best standards of living in the world, and continues to be in the midst of a steady, if mediocre, economic expansion. Yes, the U.S. economy has been growing at a below-average pace—particularly over the last few quarters when the economy was barely averaging 1% growth—but the nation also is in the midst of its seventh year of economic expansion. Given our current economic fundamentals, there had been little reason to think that would end anytime soon. Labor markets are at full employment, wages are starting to rise, and asset prices are at or near record high levels. And there was no October surprise—the initial read on gross domestic product (GDP) growth in the third quarter came in at a steady 3% after a weak first half of the year. 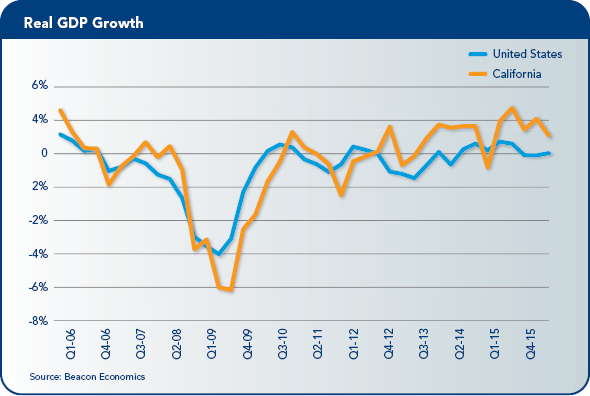 Consumer spending, despite a slower third quarter, remains one of the bright spots and sources of momentum in the U.S. economy. This may seem out of step with the rhetoric leading up to the election (Americans hurt by trade, families with no raise in 15 years, etc.), but this is because that rhetoric has been based on bad data, and even worse theories about the true state of the U.S. economy.

The recent drag in business investment stems largely from the commodity glut and the sharp declines in oil and natural gas exploration.

And the oil and gas glut is still with us. Oil production in the United States is still greater than 8.5 million barrels per day, and there are record stocks of oil inventories, not to mention drilled, but uncompleted wells. Far from being dragged down by excessive regulations, the energy sector is largely a victim of its own success.

The one surprising shift in the economy over the last few quarters is on the residential investment side—specifically as it relates to single family homes where spending has fallen since the peak in the fourth quarter of 2015, reducing the overall pace of GDP growth by a small amount over the year. This is the first time this has happened since the housing market collapse that began before the Great Recession. 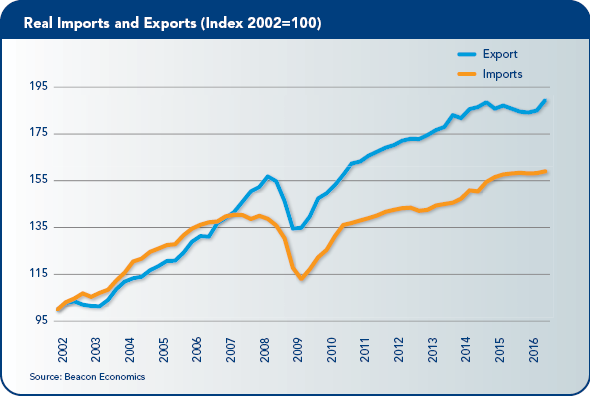 Any of these three issues, if pursued vigorously, has the potential to cause a recession. This ignores the obvious long-term damage to the economy driven by his claims to unwind major policy advances in health care, environmental protections, education, and even basic economic data collection and the threat to put the Federal Reserve under congressional control.

The housing sector is important in its own right as a driver of the state economy, but it also serves as a gauge of the state’s economic health. The picture for housing has been mixed since the recession, with prices advancing modestly despite many hurdles that have limited sales activity.

Outside of the San Francisco Bay Area, home prices have yet to surpass their pre-recession peaks. Demand for homes has been sustained by continued low interest rates, but at the same time has been impeded by limited inventories, high underwriting standards, and large down payment requirements. 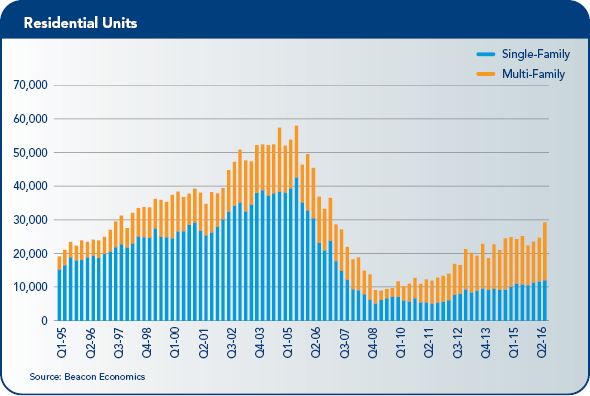 If there is any part of the residential market that is bursting at the seams, it is the market for rentals. Throughout many metro areas of the state, high demand for apartments has driven vacancy rates down and rents up. Rents continue to head north despite a significant increase in multi-family construction over the last three years, the implication being that new supply has barely put a dent in the state’s chronic and long-standing shortage of units.

Would-be buyers in California, however, face significant hurdles in the form of high down payments and underwriting requirements that are very tight by historic standards.

Office lease rates in the San Francisco Bay Area, Los Angeles County, and Orange County have led the way in terms of increases. At the same time, industrial vacancy rates in Los Angeles County are among the lowest in the nation, having declined steadily in recent quarters, while lease rates have been climbing by low single-digit yearly percentages.

Looking out over the rest of 2016 and into 2017, the state’s economic engine will chug along. While growth may occur at a somewhat slower pace than in recent years, it should be noted that the U.S. economic expansion is approaching seven-and-a-half years in length, making it one of the longest on record. Businesses and households exercised greater caution in this expansion compared to previous cycles, but California’s economy has consistently outperformed all but a few states around the nation.

California continues to face nagging policy problems, not the least of which is housing.

In many parts of the state, rent as a share of income exceeds the 30% threshold that is considered to be the norm.

Solutions will be hard to come by, but must include reducing the permitting and regulatory burdens associated with construction costs, and possibly, tax reform.

This report assesses the results of three of California’s statewide ballot initiatives, each of which underscore the need for tax reform. And while a comprehensive reform of the state’s tax code is genuinely needed, spot reforms to parts of California’s tax structure could improve some fiscal outcomes.

While few would argue against investing in public education facilities in particular, there is a broader concern about the extent to which California has encumbered itself with debt.

As of October 1, the state has $74.1 billion in outstanding general obligation long-term debt. Given the volatility of California’s finances in recent decades (see Proposition 55 discussion), servicing California’s debt obligations may come at the expense of other programs under normal circumstances and may be jeopardized when the state plunges into a budget crisis.

California’s top-heavy income tax brackets already ensure that the state’s top 1% of taxpayers accounts for 40% or more of the state’s total income tax collections. Because the incomes of these taxpayers are quite volatile, however, the state’s revenue stream is subject to wide swings that tend to be pro-cyclical, wreaking havoc on government programs from K-12 education to prisons.

This pattern is well-known, with past budget crises occurring nearly every decade. Rather than stabilizing the state’s budget, this measure locks in volatility and ensures that the state will hurdle from one tax crisis to another. This underscores the need for comprehensive reform of state and local taxes, from income taxes to property taxes and beyond.

How big of a revenue source? It depends. Simply legalizing recreational marijuana may lead to increased consumption, but consumption will rise further as the price of marijuana falls in response to production and supply increases.

California may learn from Colorado’s experience: In 2015, state and local government collected $135 million in tax revenues on the sale of nearly $1 billion in marijuana, up from $700 million in 2014. Wholesale marijuana prices, however, have fallen by nearly half over the past year, so tax collections are likely to fall below expectations in 2016.