California cities continue to rank among the most expensive in the country to do business, and it is unlikely that California will relinquish its status as a “high cost” state anytime soon, according to the 2015/2016 Kosmont-Rose Cost of Doing Business Survey.

The 20 most expensive cities are located in four states—Arizona, California, Oregon and Washington. 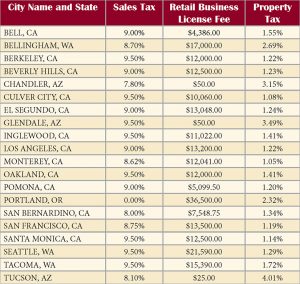 This is the 21st annual Kosmont-Rose Institute Cost of Doing Business Survey. The Rose Institute gathered data on municipal and county taxes, fees, and demographics from 305 selected cities in the Western United States. The survey takes a close look at the cost of doing business in California and eight other states that companies might consider as alternatives to California (Arizona, Colorado, Nevada, New Mexico, Oregon, Texas, Utah, and Washington).

According to the survey, in spite of high taxes and fees, these cities often are attractive to business because they provide access to financial markets, concentrated manufacturing and distribution, and regional and international trade. Many businesses are willing to pay a premium in business, property, and utility taxes in order to benefit from the abundance of business opportunities available in such cities.

On the opposite side of the spectrum, two California cities, Brea and Lake Forest in Southern California, made the list for the least expensive cities to do business.

All three cities have high utility rates of 7.5%. San Francisco ranks first on the list with an extremely high business license fee for a medium-sized retail business (typically a store of roughly 5,000 to 15,000 square feet with approximately 25 to 75 full-time equivalent employees) of $60,000 a year. Seven of the 20 most expensive cities are in Los Angeles County: Los Angeles, Santa Monica, Culver City, Inglewood, Beverly Hills, Bell, and El Segundo. In these cities, a medium-sized retail business would pay between $4,386 and $52,800 a year in business license fees.

In Arizona, the state and county privilege (sales) tax also is assessed on utilities, which helps explain Arizona’s very high utility taxes. California has no equivalent tax on utilities. Los Angeles and Culver City have the highest electricity tax rates in the survey at 12.5% and 11%. Glendale (CA) and Culver City have the highest telephone tax rates at 12.7% and 11%. Beverly Hills is the only city on the list that does not have taxes for electricity and telephone services.

Many, though not all, of the most expensive western cities also have high business license taxes. These taxes vary widely. A medium-sized retail business would pay $60,000 per year in San Francisco, $52,800 in Los Angeles, and $41,490 in Seattle. In 13 of the 20 most expensive cities, a medium-sized retail business would pay more than $10,000 a year — compared to an overall median business license fee of $1,025 in the survey.

The November 2016 election included 427 local tax and bond measures in California, of which 343 passed, an 80% pass rate. Final counts may slightly change approval results but the trend is inescapable; costs are going up in most cities and counties in California, now the fifth largest economy in the world. In total, 2016 election results represent a 56% increase in the number of approved tax measures from the prior election in 2014, the survey found.