International trade has come under attack in the recent presidential election campaign, and it is important for all to understand the significance that trade provides to the economy.

Accordingly, promoting the ability of California companies to compete more effectively in foreign markets continues to be a high priority for the California Chamber of Commerce, along with attracting foreign business to the state.

California is one of the 10 largest economies in the world with a gross state product of more than $2 trillion. International trade and investment are major parts of the state’s economic engine that broadly benefits businesses, communities, consumers and state government.

As part of its trade promotion program, the CalChamber recently joined other organizations and companies in supporting the publication of the California Export Guide. The Guide aims to help California companies “go global” and is published by ThinkGlobal Inc. in partnership with the Center for International Business Education and Research (CIBER) at San Diego State University.

Publisher Greg Sandler notes in the opening letter to the Guide that California leads the nation in attracting foreign direct investment (FDI), but continued growth in FDI and exporting “will require maximizing existing state, federal and private sector resources, and implementing new trade- and investment-related initiatives.”

Articles in the Guide provide information on subjects ranging from shipping and logistics to trade finance and international law.

Also included is a directory of international trade resources. 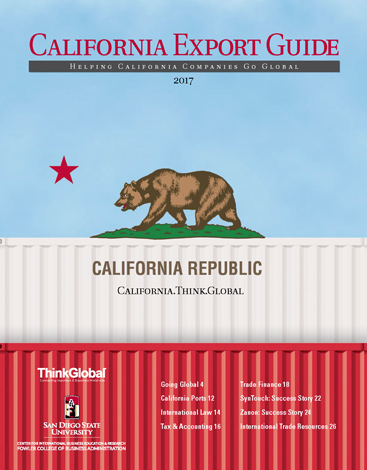 The Guide is available online at California.Think.Global. A Spanish version will be published shortly.

The CalChamber continues to support free trade worldwide, expansion of international trade and investment, fair and equitable market access for California products and services abroad and elimination of disincentives that impede the international competitiveness of California business.

Although trade is a nationally determined policy issue, its impact on California is immense. Trade offers the opportunity to expand the role of California’s exports. In its broadest terms, trade can literally feed the world and raise the living standards of those around us.