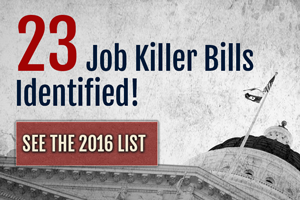 California Chamber of Commerce-opposed language that significantly increases permit processing costs has been inserted into two budget trailer bills, which have been designated as job killers.

Both AB 1611 (Committee on Budget) and SB 839 (Committee on Budget and Fiscal Review) significantly increase the costs of permitting aerospace, recycling, oil and gas, and other critical waste facilities by eliminating permit applicants’ option to be charged a predictable flat permitting fee and instead giving the Department of Toxic Substances Control (DTSC) carte blanche to charge whatever fee it determines, notwithstanding well-recognized and self-acknowledged deficiencies in DTSC’s current permitting program that have resulted in excessive delays in permit processing.

The CalChamber and a coalition of trade associations, local chambers of commerce and recycling facilities is opposing the proposed elimination of the flat fee option for permit applicants seeking to obtain a hazardous waste permit from DTSC.

The proposal will instead require applicants to enter into an uncapped reimbursement agreement with DTSC. The cost for obtaining a permit would be unpredictable and unsustainable, and would thus discourage investment in facility upgrades and renewals for critical hazardous waste facilities.

Under DTSC’s proposed language, the cost to obtain a permit renewal or modification would be limitless and thus, further investment in critical hazardous waste infrastructure upgrades will falter. California’s extensive manufacturing sector and the larger California economy depend upon sustaining hazardous waste system that can efficiently handle waste in a manner that protects both Californians and their environment.

For example, approximately 85 percent of the waste deposited at one of the largest hazardous waste facilities in California is treated as hazardous waste only in California. If and when it leaves the state because of unsustainable permitting processes like the one the budget trailer language proposes, the waste is then treated as nonhazardous and thus subject to few, if any, environmental protocols.

For this reason, the CalChamber and coalition strongly support the treatment, storage, and disposal of hazardous waste in California, and believe that Californians have a collective obligation to do so for California-generated waste deemed hazardous pursuant to California’s more stringent statutory and regulatory requirements.

Unfortunately, DTSC’s proposed language would discourage these facilities from further modernizing and improving their infrastructure by giving DTSC the authority to simply charge whatever it deems fit for purposes of processing a permit application, notwithstanding the DTSC’s own self-acknowledged deficiencies that exist within its current permitting program.

In addition, in the event certain fees are disputed, the question then arises whether DTSC may obtain additional fees for handling the fee dispute on top of those fees the department is already demanding for permit processing. DTSC’s proposal would create a process that would invite potentially intractable disputes, add further delays to the permitting process, and impose extraordinary, unjustified, and unpredictable costs on the permit applicant.

The CalChamber and coalition are proposing an alternative that would ensure DTSC could recoup a significant amount of its costs directly from the permit application process while also maintaining the transparency, certainty and predictability that hazardous waste permit applicants need.

Specifically, this alternative includes (1) retaining but increasing by 100% the current flat fees; (2) allowing DTSC to enter into a capped reimbursement agreement not to exceed the amount of the new flat fee in instances where a “significant modification” of the permit is required, such as where the application filed is substantially incomplete, or where the application is required to be rewritten in its entirety; and (3) allowing DTSC to impose a secondary flat fee above the initial flat fee in instances where DTSC determines that the applicant has submitted the application in bad faith.

AB 1611 is on the Senate Floor, while SB 839 is on the Assembly Floor. Both may be considered at any time.

The CalChamber and coalition are asking that the problematic DTSC language be replaced with the coalition’s proposed alternative.