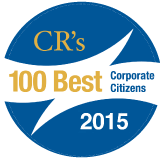 The companies that made the list were given an overall ranking on the list, but also were ranked in seven categories: climate change, corporate governance, employee relations, environment, financial performance, human rights, and philanthropy.

The following CalChamber-member companies made the “100” list and are listed in the order they were ranked overall with a sampling of their rankings in the seven categories.