Issues and The Economy

Annual guide provides overviews of CalChamber policy priorities for the year and the data to support our positions. The CalChamber sends this guide to our members every year. Print and electronic formats. (February 2022)

Economic Outlook Report – December 2022
Quarterly report to the CalChamber Board spotlights factors affecting the state’s economy, such as interest rates, the housing market, energy prices and water supply.
Past Reports

Gives the CalChamber’s position on a bill and how each legislator voted. Reports are published once a year, focusing on bills that were of high priority. The information allows businesses to measure their legislators’ performance.

The report lists the status of priority bills at three specific points in the legislative year: at the start of summer recess; when legislators adjourn for the year; and when the Governor completes action on bills.

Each year the California Chamber of Commerce releases a list of job killer bills to identify legislation that will decimate economic and job growth in California. The CalChamber tracks the bills throughout the rest of the legislative session and works to educate legislators about the serious consequences these bills will have on the state. 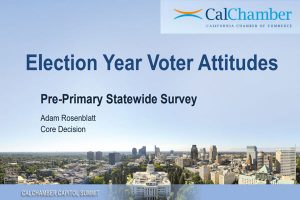 The cost of living weighs heavily on the minds of voters, and has become the principal lens through which they consider California public policy issues. This finding and many others were revealed from the recently-released, eighth semi-annual California Chamber of Commerce Poll.

Cost of Doing Business in California

The transition from the gas tax to a user-fee based on miles driven has been a topic of debate for the past 30 years. This report synthesizes academic research and survey data collected regarding transportation funding and specifically analyzes the implementation of a vehicle miles traveled (VMT) program in California. (May 2014)

Cybersecurity in the Golden State

The CalChamber joined with Attorney General Kamala D. Harris in releasing a guide outlining recommendations for California businesses to help protect against and respond to the increasing threat of malware, data breaches and other cyber risks. (February 2014)

Overview of requirements in the California Transparency in Supply Chains Act, SB 657 (Steinberg; D-Sacramento), enacted in 2010.

The first survey of its kind, put forth by the California Foundation for Commerce and Education (CFCE), highlighting education reform as a top public policy concern among California business. (March 12, 2007)