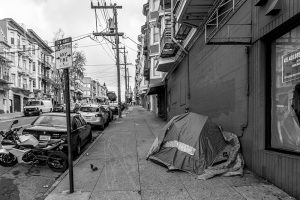 We recently reported on voters’ concerns about the economy and the state’s business climate. Based on the CalChamber poll’s findings, it is safe to say that economic concerns are at the root of voter anxiety in California. But fears about the breakdown of civil order in areas like crime and homelessness also are contributing to voters’ unease about the how their future might unfold in California.

Voters’ pessimism appears to be driven by how they see their own prospects. When asked about the American Dream — that if you work hard, you’ll get ahead — a majority (55%) responded that this once held true but does not anymore, while 13% say this has never held true. Only a third of Californians say that the American Dream still holds true; this sentiment is down by 16 points since 2018.

What are the most important, but unaddressed, concerns of Californians? More than 85% of voters said that elected officials in Sacramento are not spending enough time on the following issues:

One of the biggest sources of public anxiety is personal safety. Asked about crime, 69% say it has increased, with more than half of those polled saying it’s gone up “a lot.” More than 4 out of 5 voters agree that street crime, shoplifting and car theft have become rampant throughout California, and 63% agree that they no longer feel safe because of danger and disorder in society today. That last sentiment has grown stronger over the base three years.

As to possible responses, half of voters support increasing funding and resources to law enforcement and another 38% say funding should remain about the same. Nearly 9 in 10 voters (61% strongly) say that violent offenders should be kept in prison for their entire sentence, as determined at the trial. A similar 89% of voters (56% strongly) agree that prosecutors who refuse to enforce the law should be replaced.

The CalChamber poll was conducted by Bold Decision and Pierrepont Consulting and Analytics with 1,000 online interviews of California 2022 general election voters from November 12–14, 2022. The margin of error for this study is +/- 3.1% at the 95% confidence level and larger for subgroups. This is the eighth year CalChamber has published The People’s Voice survey.