Sixteen California Chamber of Commerce member companies were among the top 25 corporate users of solar energy in the country, according to a new report by the Solar Energy Industries Association (SEIA).

Each year, the SEIA follows solar adoption by businesses across the United States to produce the Solar Means Business Report. Companies range from some of the country’s largest and most recognizable brands to the small businesses that make up the backbone of our communities.

According to the latest report, released on October 7, companies made significant investments in clean energy and installed more than 1,280 megawatts (MW) of new commercial solar capacity in the United States in 2019, the second largest year on record. The United States has reached more than 8,000 MW of installed commercial solar capacity across 38,000 projects.

Corporate solar adoption has expanded rapidly over the last several years, with two-thirds of all capacity installed since 2015. The 1,286 MW installed in 2019 represents a 10% increase from 2018 and is second to only 2017 for annual commercial deployment, according to the report. The surge in on-site commercial solar continued in 2019, with a record 844 MW installed, while 441 MW of off-site projects were completed. The systems tracked in the Solar Means Business Report generate enough electricity each year to power 1.6 million U.S. homes. 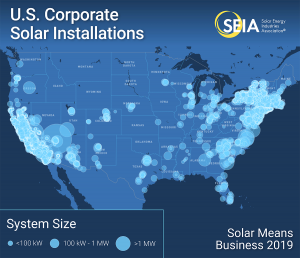 The report also compared solar installation among the nation’s states, noting that commercial solar installation density varied across the country depending on the unique environmental, economic and regulatory characteristics of each state. California continued to lead the nation for commercial solar due to “a supportive policy environment and excellent solar resources, resulting in a diverse mix of smaller on-site and larger off-site projects.”

COVID-19 has upended business activity across the country, and the solar industry has not been spared, the report finds. Many on-site installations in the second quarter of 2020 were halted or delayed due to work stoppages and social distancing practices that affected all aspects of the solar business, including sales, installation, permitting, and supply chain. Since the second quarter, business have largely recovered as shelter-in-home orders have been lifted in many states.

The report also reveals that large corporations developing major off-site projects said there were few delays in their projects as most utility-scale construction work was deemed essential. Therefore, large corporates aren’t reporting any delays in renewable energy procurement or changes to their renewable energy goals or timelines. Smaller companies pursuing smaller rooftop projects have pulled back somewhat on planned projects, pushing some installations to 2021 due to second quarter delays, or canceling entirely due to concerns around capital expenditures in an uncertain economy. 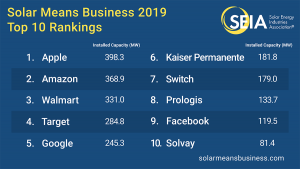 Following are the 16 CalChamber member companies identified in the report as among the top 25 corporate solar users: