This was a very important day for both California and China, marking the opening of the California-China Office of Trade and Investment and official unveiling ceremony!

The event marks California’s first permanent trade presence in China since 2003. This new office will bring together two of the largest economies in the world. It will strengthen two-way trade and will promote reciprocal investment between California and China. 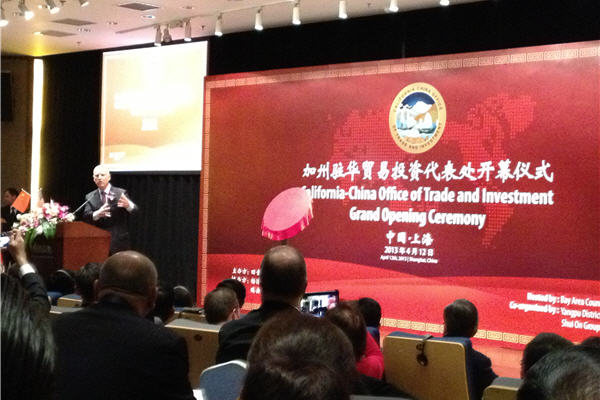 Governor Brown speaks at the opening of the California office in Shanghai’s Yangpu District.

An unveiling of the new seal for the California-China Office followed. 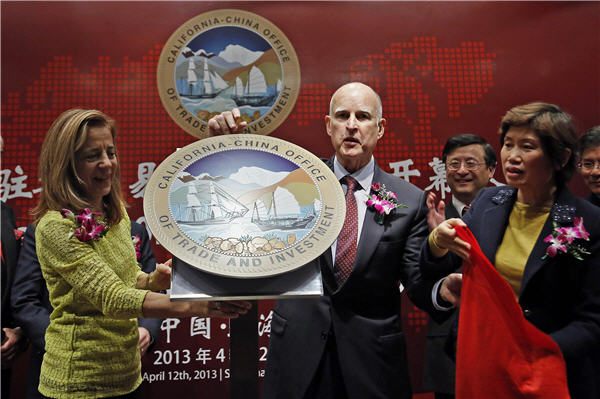 There was a signing of initial deals, including a $20 million contract involving Sacramento-based McWong International (a CalChamber member) and Emeryville-based New Logic Research with Inner Mongolia-based ChinaCoal Mengda New Energy Chemical Company and China National Coal Group for a zero-liquid-waste discharge project. McWong International also is in the final stages of forming a strategic partnership to clean up industrial water in China. 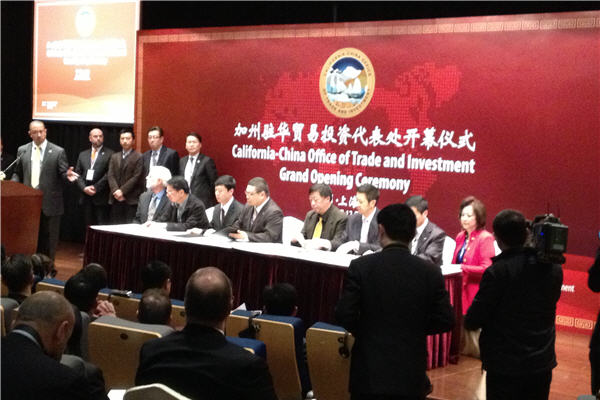 For further information about the new Office, please see http://www.business.ca.gov/Programs/International-Affairs-and-Business-Development/International-Trade-Promotion/Trade-Missions/China-Trade-Network

The ceremony was followed by a reception allowing for California delegates to meet with Chinese business and government leaders – and discuss possible investment opportunities.

With government influence, Chinese foreign direct investment into the United States has grown dramatically, from less than $1 billion in 2008 to an estimated $6.5 billion in 2012. The Rhodium Group projects that China’s cumulative outbound foreign direct investment will grow to between $1 trillion and $2 trillion by 2020; of that, California has the potential to attract between $10 billion and $60 billion of Chinese investment.

Many thanks to Shanghai’s Yangpu District for organizing a banquet lunch to celebrate the unveiling of the California-China Office of Trade. Yangpu is one of the 19 districts in Shanghai and home to 1.3 million inhabitants. As the largest downtown district, Yangpu has the largest concentration of universities and research centers in China, backing by the central government as an official innovation zone, sites ripe for new development and redevelopment, and quick access by road and subway to the rest of Shanghai. Yangpu already has become home to a growing cluster of exciting companies, including many from California. 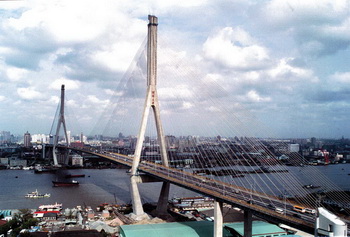 To wrap up our last full day in China, the delegation attended a press conference followed by a California Lifestyle Reception and Wine Makers’ Dinner – organized by the Visit California team. 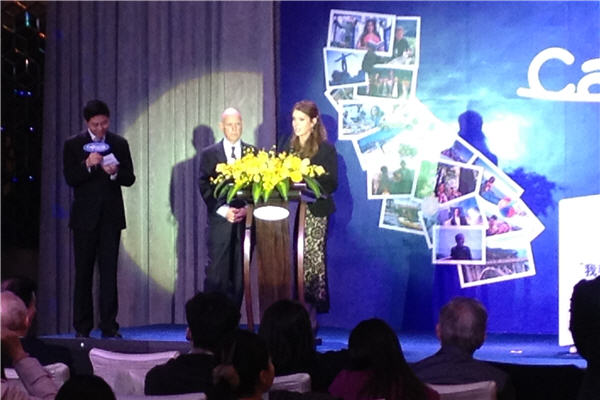 The reception following featured California agriculture products and displays along with a cooking demonstration by chef Brad Turley of the GOGA Restaurant in Shanghai, which serves California-Asian cuisine. He is a native of San Francisco and named his establishment after the Golden Gate Bridge. 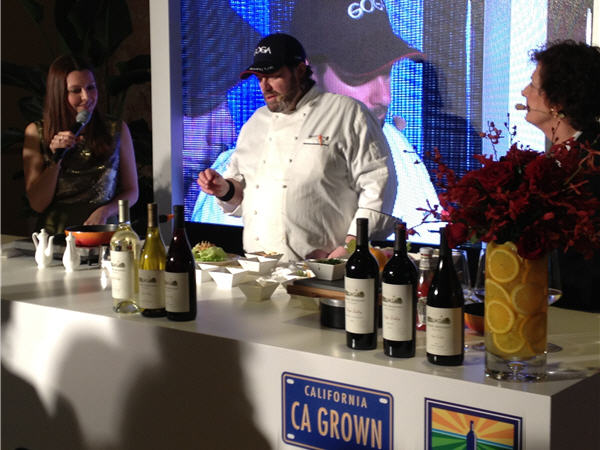 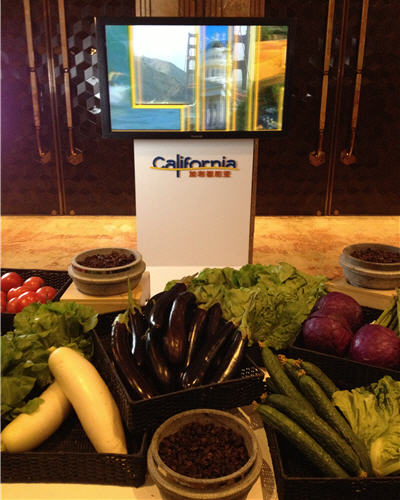 A sampling of California agricultural products.p

Guests at these events included tour operators, agricultural buyers and the media. 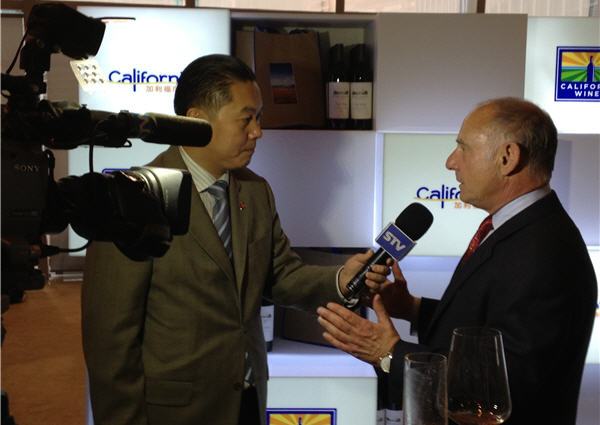 Dinner was served with wine provided via the California Wine Institute.

As Chinese tastes change and consumption grows, wine offers a particular business opportunity. According to the Wine Institute, California accounts for 90 percent of global wine sales by the United States. Of this, China is a small but growing market. In 2011, U.S. wine exports to China (primarily from California) totaled $62 million, 42 percent higher than in 2010 ($44 million). This makes China the fifth largest global destination for U.S. wine, after the European Union ($478 million), Canada ($379 million), Hong Kong ($163 million) and Japan ($105 million). As these figures show, sales to China are only a fraction of those to other major markets, but the growth rate is promising. The major competitors are Australia, Europe and domestic Chinese producers. It should be noted that Hong Kong recently became a free trade zone for wine, generating a dynamic regional wine market.

What a perfect way to end a busy and productive week in China! This trip has effectively strengthened ties between China and California, which I am confident will continue to thrive.

The Bay Area Council has done an impressive job of organizing the mission together with the California Governor’s Office and GO-Biz. The delegation is very thankful to our many gracious Chinese hosts for organizing events throughout the week. The trade mission concludes with one more day in Guangzhou. Thanks for following the trip blog!

Having been involved in organizing gubernatorial trade missions going back to Governor George Deukmejian, with the establishment of the first California State Trade and Investment Offices around the world, I know the amount of “behind the scenes” work that goes into a successful mission.

This was a large mission with many components, including agriculture, energy and tourism. Thanks and congratulations to all involved including: the Bay Area Council – John Grubb, Wei Bing, Del Christensen, Genevieve Herreria, Elizabeth Cheng; the Governor’s Office of Business and Economic Development (GO-Biz) – Kish Rajan, Alexis Podesta, Paul Oliva, Brook Taylor and Abby Browning; the California Department of Food and Agriculture – Josh Eddy; and all the talented individuals at Visit California. And a special thanks to the U.S. Embassy, which is crucial to the success of any mission. Individuals such as Dale Wright (originally from Sacramento) in the Commercial Section are invaluable contacts.

A bit of history: The California Chamber of Commerce hosted a reception in the mid-1980s for 500 people celebrating the first California Trade and Investment Office opening in Tokyo. Under Governor Deukmejian and with the assistance of Jim Robinson, we continued this model and more offices followed in London, Frankfurt, Mexico City, Hong Kong and Taipei.

Following the unfortunate closing of the California Department of Commerce and the related state foreign trade and investment offices due to budget cuts, Governor Arnold Schwarzenegger continued marketing California with the assistance of Will Fox and Garrett Ashley with missions to Asia, Europe, Canada and Mexico.

Now under Governor Brown and with the assistance of GO-Biz, the state once again is on a path of recognition regarding the importance of trade and investment to California’s economy, and commercial diplomacy has become an accepted methodology.

In 2012, California exported $161.7.4 billion to 225 foreign economies. China continues to be California’s third largest export destination, with over $14 billion in exports.

And last, but not least, thanks to my colleagues at the California Chamber of Commerce who have assisted with daily production of this blog, including my assistant, Mary Douglass; Steve Dormann, Web managing editor; Sara Espinosa, publications editor; Neil Ishikawa, art director; and Ann Amioka, vice president of communications.