The United Kingdom is a unitary state composed by the countries of England, Wales, Scotland and Northern Ireland. The UK is a part of the European Union and partakes in EU economic policy, although it maintains the pound (£) as its national currency, instead of adopting the euro (€).

Two-way trade between the United States and the United Kingdom was $109.2 billion in 2020 and was the fifth largest importer of US goods with a total value of $59 billion. Top exports to the UK were primary metal manufacturing, making up 27.1%, followed by transportation equipment, chemicals, and oil and gas. The U.S. imported $50.2 billion from the UK in 2020. Transportation equipment accounted for 22.5% of the total, followed by chemicals, non-electrical machinery, and reimports. (U.S. Department of Commerce)

The United Kingdom is California’s 11th largest export destination, with over $4.9 billion in exports. Transportation equipment accounted for approximately 22.9% of exports – more than $1.13 billion. Computer and electronic products brought in $1.12 million, or 22.8%; while both chemicals and second-hand merchandise accounted for 12.1% and 7.9%, respectively. 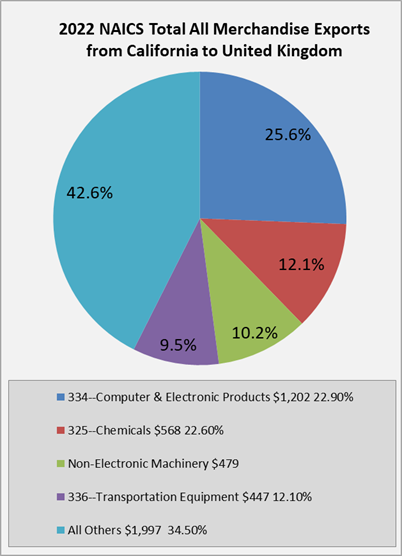 In 2020, imports into California from the United Kingdom were approximately $3.7 billion, a decrease from $6.25 billion in 2019. Top import categories being transportation equipment, which made up almost 36.8% of the total, followed by computer/electronic products, non-electrical machinery, and chemicals.

Per the US Department of Commerce, the U.S.-UK investment relationship is the largest in the world, valued at over $1 trillion in 2016 and creating over two million jobs, about one million in each country.

The UK is the entry market into the European Union for over 41,000 U.S. exporters. Annual U.S. exports to the UK are valued at more than $100 billion.

UK was the fourth largest source of FDI in the U.S. in 2019. UK FDI in the US contributed $6.7 billion to research and development and an additional $47.7 billion to expanding US exports. In 2018, there were 1,271,100 US workers who were employed by the U.S. affiliates of majority UK owned firms. The top industry sectors for British FDI in the US are: business services, software and IT services, financial services, communications, industrial equipment, and transportation. (Select USA)

In California, the number two country for FDI through foreign-owned enterprises (FOEs) is the United Kingdom. British FOEs in California provide over 111,430 jobs through 2,433 firms amounting to $9.44 billion in wages. The top jobs by sector are: professional/business services, manufacturing, wholesale trade, transportation/warehousing/utilities, and retail trade (World Trade Center Los Angeles FDI Report, May 2020).

Global Britain in a Competitive Age: The Integrated Review of Security, Defence, Development and Foreign Policy
Government of the United Kingdom, March 2021

The United States and the United Kingdom held the third meeting of the U.S.-UK Trade and Investment Working Group on March 21-22 and the inaugural meeting of the new U.S.-UK Small and Medium-sized Enterprises (SME) Dialogue on March 20.

The Working Group, established in July 2017, works to deepen current trade and investment ties between the two nations and is laying the groundwork for a potential, future free trade agreement once the United Kingdom leaves the European Union.  The Working Group discussions covered a range of topics, including industrial and agricultural goods; services, investment, intellectual property rights and enforcement; regulatory issues related to trade; and small and medium-sized enterprises

The inaugural meeting of the SME Dialogue brought together more than 100 U.S. and UK SMEs with government officials from both countries to discuss ways to deepen trade and investment and enhance SME cooperation, identify resources currently available from both governments to assist SMEs, and hear from SMEs on their specific challenges and opportunities when trading bilaterally.  At the Dialogue, the U.S. and UK governments jointly released the guide to Doing Business in the U.S. and UK: Resources for Small Business as a key tool for SMEs seeking to benefit from U.S.-UK trade.

Brexit Explained: What’s Next on the UK’s Road Out of the EU
The Sacramento Bee, March 14, 2017

According to a February 2019 report by Visit California, 720,000 people visited California from the UK in 2017, spending approximately $1.03 billion, which is an average of $1,433 per visitor. Los Angeles and San Francisco were the top 2 destinations in the U.S. for tourists from the UK, followed by Las Vegas.

(April 25, 2019)  Brexit is the latest phenomenon in the western world presently characterized by shock and schism, a leading scholar explained yesterday at the California Chamber of Commerce.

“Brexit is the most profound crisis that Europe has had since the end of the Second World War,” Dr. Matt Beech, senior fellow at the Institute of European Studies at the University of California, Berkeley, told nearly 100 guests at the CalChamber International Luncheon Forum. The luncheon was sponsored by Suburban Water Systems, a CalChamber member.

Dr. Beech provided attendees with an analysis of the potential implications for the United States and specifically, trade in California, with Britain’s potential withdrawal from the European Union.