Following is the text of a letter sent to the Legislature late last week. 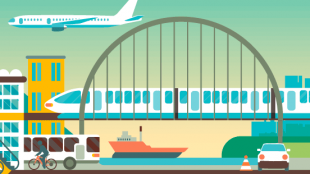 The damage to our roads and bridges from California’s most recent storms merely highlights and underscores the need to invest in our crumbling transportation infrastructure. The bond revenue from 2007 has run out. The federal stimulus money from the Obama administration has been spent. And, the buying power from gas tax revenues has been cut in half since it was last raised in 1993.

Raising additional revenues for transportation is not an easy vote, but doing nothing will endanger our critical transportation system necessary to move people and goods. Options to raise revenues include those proposed by the Governor and legislative leaders of the transportation committees.

In order to be effective, the revenue must be a long-term, reliable stream to complete multiyear projects and should not be diverted from transportation spending. Additionally, the voters are skeptical that existing revenues are spent as efficiently as possible, so any new revenues must be accompanied by reforms that ensure new and existing transportation revenue are invested more effectively and efficiently.

Gas taxes and registration fees are those revenues that cannot be diverted away from transportation by virtue of the protections in the California Constitution. That doesn’t mean that other sources can’t be considered, but they should have constitutional protections as well, either taking advantage of existing provisions or amending the Constitution to protect new revenues.

For example, charges on alternative fuel vehicles could be protected as a highway maintenance fee under Proposition 26 if based on vehicle miles traveled. Such a user fee could be passed with a majority vote, though the revenue could only be spent on maintenance for streets and roads. Other new taxes would require additional amendments to the Constitution.

What is the correct amount for new revenue? Is it $3.5 billion in annual revenue as the Governor has proposed, or should it be more, as proposed by the Legislature? At this point, it’s any amount at or above the Governor’s proposal that builds enough consensus to pass the Legislature as quickly as possible.

Finally, a vote to raise revenues is difficult enough. No proposal should be weighed down by additional, unnecessary provisions, such as language that will impair port modernization.

According to Allan Zaremberg, president and CEO of the California Chamber of Commerce, “Our transportation infrastructure is critical to California’s economy. The California Chamber of Commerce supports new revenue to repair and maintain our roads and bridges and to expand congestion management. Every day, California drivers experience more delays, more potholes and more frustration. We urge the Legislature to immediately move forward with a long-term solution.”

We look forward to working with the administration and the legislature to address California’s short and long term infrastructure issues.