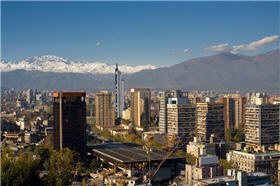 The California delegation arrived in Santiago yesterday (via American Airlines, a long-standing CalChamber member) and were welcomed by the sights of a lovely modern city! What a great treat to spend some time in the Southern Hemisphere, where spring is on the horizon! (And yes, the water really does go the opposite way down the drain….) Even though we traveled for many hours, we were thankful that we only had to adjust our internal clocks by three hours. We checked into the hotel and began our whirlwind trip.

Carlos Valderrama, senior vice president for global initiatives for the Los Angeles Area Chamber of Commerce, and I are representing the California business community.

One-third of Chile’s 16 million people live in Santiago. The central region of Chile, which includes Santiago, has a mild climate like California. The “central valley,” just like in California, is the breadbasket for Chile — with fruits and vegetables — and many wineries.

The similarites between Chile and California abound. The Chileans say their country really is like California only turned the other way around — with the desert to the north. The Chilean coastline is longer, but we both have mountains, a delta, skiing, rafting, and of course, the Pacific Ocean. And right through the middle of the country is the Pan-American Highway — like our I-5.

First, we were briefed by the Chilean Ministry of Foreign Affairs on Sunday afternoon. (A special thanks to Cristobal Barros for his graciousness.) This was very useful to us as we had much to learn about Chile and the many opportunities for California businesses.

Prior to the official beginning of the American Competitiveness Forum, the California delegation was driven from Santiago to Veramonte Vineyard in the Casablanca Valley, owned by a family who also owns Quintessa Vineyards in Napa, California. Casablanca Mayor Manuel Jesus Vera welcomed us. 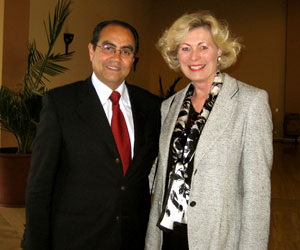 Napa and Casablanca are long-standing sister cities. The similarities of Chile and California become increasingly apparent…the Chilean wine industry is growing, but there is room in the world market for both California and Chilean wines.

The California delegation then proceeded to the U.S. Ambassador’s lovely residence. Ambassador Paul Simons and Mrs. Victoria Simons had graciously invited the entire U.S. delegation attending the Americas Competitiveness Forum to their home for a reception. 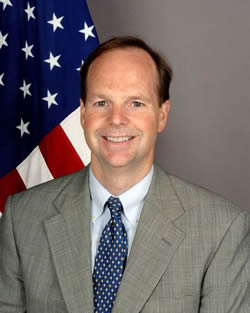 The Ambassador briefed the delegation on the U.S.-Chile bilateral relationship. There are already partnerships in so many areas ranging from observatories located high in the Andes to solar technology projects.

We were able to talk with embassy officials, as well as, many other states’ officials participating in the Forum. Mitch Larsen, the commercial counselor at the U.S. Embassy, did a great job in putting all of this together. (He started his career with the U.S. Department of Commerce in San Francisco years ago — small world!)

The reception was held in the manner of a traditional Chilean tea. What a treat! Not only were we able to get acquainted with fellow U.S. government and business representatives located in Santiago, but we experienced some of the Chilean culture first-hand.

After the Chilean tea, we headed back to our hotel for the official welcome reception for the 2009 Americas Competitiveness Forum. The room was filled to capacity with government and business representatives from all over North, Central and South America. We met some very interesting people and hopefully made some connections that will last a lifetime. I look forward to developing these relationships throughout Latin America.

Hugo Lavados, the Chilean minister of economy, welcomed us to the reception. The minister was among the delegation that traveled to California last year with President Bachelet. 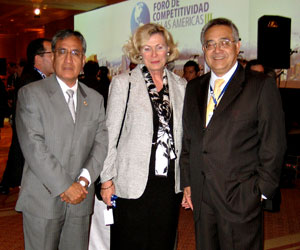 Afterwards, Chilean Undersecretary of Foreign Affairs VonKlavern hosted the California delegation for dinner together with U.S. Ambassador to Chile Paul Simons and Chilean Ambassador to the United States Jose Goni, 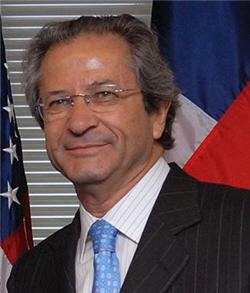 who had traveled from Washington, D.C. to be present for the Forum. It was a gathering of approximately 50 business and government representatives and an outstanding venue to further cement California- Chile ties.

Also attending the dinner were Ambassador Gabriel Rodriquez; Ambassador Isauro Torres, director of North American affairs; and our long-time contact and friend, Cristobal Barros for the Ministry of Foreign Affairs. ProChile was represented by Viviana Arenda from Los Angeles and Chilean Consul General Alex Geiger-Soffia, based in San Francisco, who traveled for the event. Topics of conversation included business, agriculture and energy issues. It was a full and productive first day!

Rise and shine and off to the first day of the Americas Competitiveness Forum! Today was a very busy and important day for the California delegation.

What a busy and informative morning we had. Chilean Finance Minister Hugo Lavados opened the morning by focusing on the interdependence of the Americas. By recognizing that Chile does not have the critical mass necessary, the Minister said that creating international colloboration is vital — and competitiveness and cooperation are key. 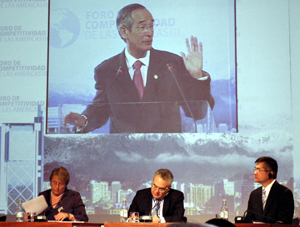 Guatemalan President Colom spoke on how Central and South America were getting closer and also recognized an increase in harmony among the Americas. 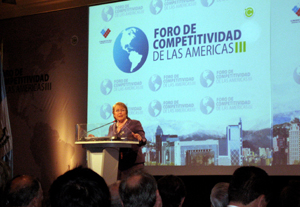 Chilean President Michele Bachelet (who has a 74 percent approval rating in her fourth and final year in office, with no consecutive re-election permitted) welcomed the Forum delegates in a spirit of cooperation among the Americas. The President’s focus was on “Competitiveness in Times of Crisis.” 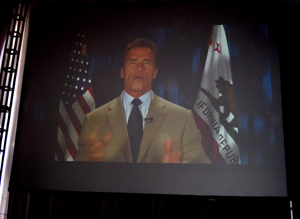 During the Forum lunch, a video address by our own California Governor Arnold Schwarzenegger was played and well-received by the crowd. 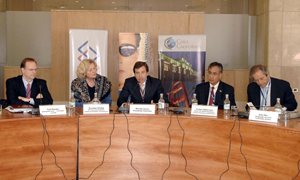 After lunch, we met with Ricardo Garcia, president of the American Chamber of Commerce in Chile. The CalChamber, along with the Los Angeles Chamber, signed a Memorandum of Understanding (MOU) with the AmChamChile, to encourage and promote trade and Investment among our respective chambers. 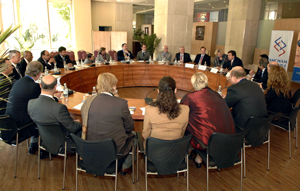 This MOU is part of a larger Chile-California Plan supported by the Chilean Foreign Ministery. Both Chilean Ambassador to the United States Jose Goni and U.S. Ambassador to Chile Paul Simons witnessed the signing of the MOU. 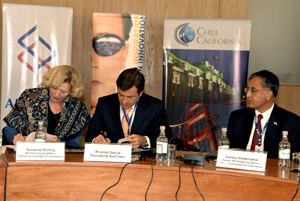 Signing the MOU: the CalChamber, AmCham Chile, and the LA Chamber 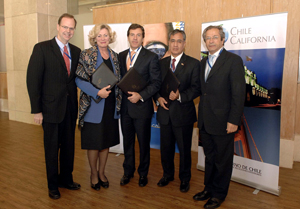 The MOU has been worked on diligently by Jaime Bazan, general manager of the AmCham, and John Welby, special projects. Mateo Budinich, former president of the American Chamber of Commerce in Chile, will head this project for the AmCham. 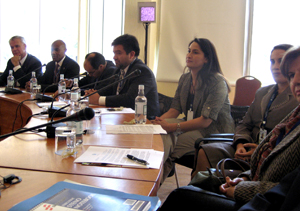 Members of the California delegation observing the ceremony.

The California-Chile trade relationship goes back to the U.S.-Chile FTA implementation. Former Consul General, Fernando Varela (now DCM of the Chilean Embassy in Washington D.C.) was very supportive. Consul General Alex Geiger-Soffia continues that support, together with Prochile Trade Commissioner Viviana Aranda http://www.chileinfo.com. Cristobal Barros of the Ministry of Foreign Affairs will continue to coordinate the Chile-California Plan from Santiago.

Following the MOU signing, the California delegation headed back to Ambassador Simons’ residence to host a California-specific reception. Attending were several Chilean government officials, including the Minister of Foreign Affairs and Chilean Ambassador Goni, as well as many California businesses which have operations in Chile. Representatives of CalChamber member companies in Chile, include American Airlines, Google, Chevron, Intel, Cisco, Clorox, Walt Disney, Mattel and Sempra. It was a great crowd and a wonderful opportunity for us to mingle with the local business community.

Again, it was a long and productive day! Tomorrow, many more things are on the horizon and then our scheduled departure. Where does the time go?

Early Tuesday morning, another day awaited us at the Americas Competitiveness Forum. Although our bodies were telling us to sleep “just five more minutes,” we hurried and readied ourselves for a full and final day in Santiago.

Heading back to the Forum, we were greated with a full list of activities, sessions, and meetings. Ministers from many different countries addressed the group as well as the heads of several prominent South American businesses. All of this was very informative and I look forward to implementing some new ideas.

In the morning, the California delegation met with Ministry of Education officials regarding an exchange of students in the future. We also met with officials from BECAS Chile which is a new scholarship program established for Chilean students to go abroad. There is great interest among Chilean students to attend California universities and then return to Chile with their knowledge from abroad. Also present were representatives from the Consejo de Rectores de las Universidades Chilenas, which is the association of Chilean universities.

Before lunch, the California delegation had a private briefing with U.S. Commerce Secretary Locke. The Secretary spoke regarding export promotion and trade relations together with details of the ACF 2010 to be held in Atlanta.

Lunch was hosted by the American Chamber of Commerce in Chile. The California delegation was pleased to join the local business community for this event. Secretary Locke spoke of U.S. – Chilean relations but also of a broader U.S. policy toward South America. The event was a wonderful opportunity to discuss working together on export promotion and trade issues for the future.

Following lunch, the California delegation met with the Invest in Chile group. As trade and investment are two way streets, it was most interesting to learn of the Chilean strategies to attract investment from abroad.

As we finished our final day in Santiago, we were encouraged to just slow down and take in the beauty of the majestic city. Sometimes you never fully appreciate the natural scenery when you are focused on a goal. With the Andes as the backdrop and the first signs of spring returning, Santiago is truly a beautiful city. My only regret is that there is not enough time to sightsee. I will definitely be returning to Santiago, although perhaps next time, I will bring my family. In the interim, I am satisfied that the California-Chile trade and business relationship has been greatly furthered by the vast and productive meetings held over the past few days.

P.S. To learn more about Chilean literature — and if you like the genre Mystical Realism — choose one of Isabel Allende’s books. Also, try to look up Pablo Neruda, the Chilean poet who won the Nobel Prize for literature in 1971. Expand your horizons and happy reading.

Thanks for following my first trip blog!