After the December 1991 dissolution of the Soviet Union, the Russian Federation became its successor state, inheriting its prominent place on the world stage. With a GDP of $1.658 trillion in 2018, Russia is one of the world’s top exporters according to the World Trade Organization and CIA Factbook.

The United States exported $5.786 billion to Russia in 2019, with 32.3 percent being transportation equipment. Russia exported $22.28 billion to the US in 2019, with 43.7 percent being petroleum and coal products. Primary metal manufacturing contributed 20.5 percent and oil and gas made up 15.4 percent while the chemicals category had 9 percent of the total US imports from Russia. 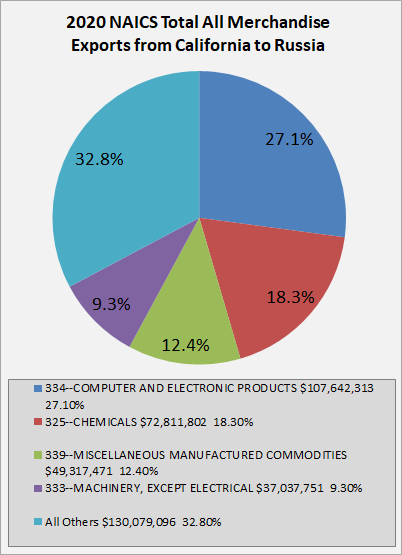 California exported $409 million in goods to Russia in 2019. 29.2 percent was attributed to computer and electronic products, 15.4 percent consisted of non-electrical machinery, miscellaneous manufactured commodities made up 14.9 percent, and chemicals were the next highest exports, with 9.6 percent. In the same year California imported $1.63 billion from Russia. Top imports included petroleum and coal products with 44.5 percent, oil and gas that consisted 25.8 percent, primary metal manufacturing made up 14.8 percent, and chemicals made up 4.1 percent of imports. (US Department of Commerce)

According to the most recent figures, total investment by Russian business in the U.S. market reached $3.87 billion in 2018, while total U.S. direct investment into Russia reached $14.79 billion. Russian FDI in the US supported between 4,800 jobs in 2017. Russia invested $21 million into research and development in the US and $194 billion in expanding U.S. exports. The top industry sectors for Russian FDI are: software and IT services, financial services, metals, coal oil and natural gas, business services, and chemicals. (Select USA)

Tatarstan Investment Development Agency (TIDA) has a representative office within the United States. The TIDA is a special executive body of the Government of Tatarstan founded in 2011 to carry out investment promotion and facilitation. TIDA is responsible for all international investment and business projects in the Republic of Tatarstan. TIDA focuses its efforts on attracting investment into eight priority sectors of the Tatarstan economy: chemical & petrochemical, machinery & automotive parts, construction & building materials production, agriculture & food processing, medicine & pharmaceuticals, IT & telecommunications, Halal industry, and service industry & tourism.

The Republic of Tatarstan is located about 500 miles east of Moscow, and is geographically similar in size to Ireland. Tatarstan is an oil production and petrochemical center. The population of Tatarstan is over 3.7 million people.

New Opportunities for US business in Russia

US Companies in Russia

Comment of Ambassador of Ukraine to the U.S. Olexander Motsyk on the situation in Ukraine
Embassy of Ukraine in the U.S., March 17, 2014

Presidential Proclamation — To Extend Nondiscriminatory Treatment (Normal Trade Relations Treatment) to the Products of the Russian Federation and the Republic of Moldova
December 20, 2012

California and the Russian Market
Coalition for US-Russia Trade

The True Cost of Jackson-Vanik
The National Interest, March 29, 2012

Why Approving Permanent Normal Trade Relations with Russia is in the U.S. National Interest
U.S. Chamber of Commerce, March 2012

The USRBC Applauds Russia’s Formal Invitation to Join the WTO Package
US – Russia Business council, December 16, 2011
The WTO is a multilateral treaty subscribed to by over 150 governments that together account for more than 97 percent of world trade. Over 20 governments are currently negotiating or due to negotiate accession to the WTO. Its basic aim is to liberalize world trade and place it on a secure basis, thereby contributing to economic growth and development and to the welfare of the world’s peoples.

The functions of the WTO are:

The Russian Federation made significant steps towards WTO membership in 2006. The United States and the Russian Federation reached a bilateral trade agreement in November 2006, which cleared a major hurdle to their membership. This follows the 2005 completion of bilateral negotiations on goods with 29 total WTO members, accounting for countries that provide 87 percent of all Russian imports.

On October 1, 2010, US Trade Representative, Ambassador Ron Kirk stated “As President Obama has made clear, having Russia in the rules-based system of the WTO is clearly in the United States’ interest, and we will continue to offer our support as Russia completes the accession process. By reaching bilateral agreement on key issues related to the accession process, Russia can now devote additional energy to addressing remaining steps at the multilateral level. The United States will continue to provide support to Russia as it accomplishes these steps, and to contribute to continued momentum in the process, in cooperation with other members of the WTO.”

From the US Chamber: On October 20,2011 – nineteen business organizations representing the technology industry and the broader business community, including the Chamber, sent a letter to President Obama to underscore the importance of Russia joining the Information Technology Agreement (ITA) as part of its World Trade Organization (WTO) accession package.

The letter states: “We believe it is crucial for Russia to maintain its 2006 commitment to join the ITA as part of its accession package. While we are confident the Office of the U.S. Trade Representative is fully engaged in attempting to bring about this outcome, we believe it is important to directly communicate to you how essential it is to our industry that Russia become an ITA signatory and to underscore with you that the U.S. technology industry’s support of Russia’s accession to the WTO is predicated in large part upon it joining the ITA.”

Ulyanovsk and Chelyabinsk are two fast-developing regions of Russia. Both regions are taking steps in different fields of the economy, including manufacturing, metallurgy, natural resources extraction, engineering, construction, energy, agriculture, banking, and others to successfully collaborate with foreign investors.

The regions have a solid investment profile that have tripled for the last five years and reached more than $4 billion.

Krasnodar is regarded as one of the six regions in Russia with the highest investment potential. “The region ranks first in the country in terms of agricultural production, second in housing commissioning, third in investments attracted, fourth in terms of construction completed and public paid services, fifth in terms of retail sales and sixth in public catering turnover.” Guide to Investment, Krasnodar Region, 2011

Samara is a prominent region in Russia, widely regarded as the place for bio-innovation. Its key industries include machine engineering and metal processing, chemicals and petrochemicals, food and beverages, energy, non-ferrous metals and agriculture.

Primorsky Krai is the largest economy in the Far East of Russia. Its key industries include food production, machine building, defense, construction and timber. In 2012, the region attracted USD 700 billion in foreign investments, primarily from the People’s Republic of China, the Republic of Korea, Japan and the US.

In June 2010, Governor Arnold Schwarzenegger signed a memorandum of understanding (MOU) with the Renova Group of Companies in order to affirm a partnership to support and promote the preservation of California’s Fort Ross State Historic Park, and to raise awareness of its historical and cultural significance.

On Wednesday, August 15,2018, the California Chamber of Commerce met with representatives from the Tatarstan Investment Development Agency of the Republic of Tatarstan to promote trade and investment. The delegation was led by Ms. Taliya Minullina, CEO of the Tatarstan Investment Development Agency and a Member of the Tatarstan Government in the Russian Federation. She was accompanied by Robert Galiullin, trade representative of the Republic of Tatarstan, and Kirill Gladnev, chief executive assistant.

The Tatarstan Investment Development Agency (TIDA) is a special executive body of the Government of Tatarstan founded in 2011 to carry out investment promotion and facilitation. TIDA is responsible for all international investment and business projects in the Republic of Tatarstan. TIDA focuses its efforts on attracting investment into eight priority sectors of the Tatarstan economy: chemical & petrochemical, machinery & automotive parts, construction & building materials production, agriculture & food processing, medicine & pharmaceuticals, IT & telecommunications, Halal industry, and service industry & tourism. Top Story