The Indo-Pacific region stretches from the United States’ west coast on the Pacific Ocean to the west coast of India in the Indian Ocean, connecting the two oceans through Southeast Asia. The region is made up of 14 countries: Australia, Bangladesh, Burma, India, Indonesia, Japan, Malaysia, New Zealand, Philippines, Singapore, South Korea, Taiwan, Thailand, and Vietnam. The Indo-Pacific region is one of the greatest current and future engines of the global economy.

The Indo-Pacific is the most populous, fastest growing and most economically dynamic part of the world. By 2030, it will represent 66% of the world’s middle class, and 59% of all goods and services sold to middle class consumers will be sold in the Indo-Pacific. Developing nations in the region will need about $1.5 trillion in investment every year for the next decade in order to develop the infrastructure necessary to sustain their growth.

The U.S. has made foreign direct investments of $1.4 trillion into the Indo-Pacific region. The U.S. doubled the amount of security assistance it provided to the Indo-Pacific nations, totaling more than $500 million. The BUILD Act, which President Donald J. Trump signed in October 2018, provides for development finance capacity up to $60 billion. The Indo-Pacific Transparency Initiative also has more than $400 million available to support allies, partners, and regional institutions in advancing shared principles of combating corruption and promoting good governance.

President Trump in 2017 outlined his vision for a free and open Indo-Pacific at the Asia Pacific Economic Cooperation (APEC) CEO Summit in Vietnam. President Trump has aimed to reinvigorate private business interest in the region.

In November 2018, the Trilateral Partnership for Infrastructure Investment in the Indo-Pacific, formed by the United States, Australia and Japan in July 2018, signed a trilateral Memorandum of Understanding (MOU) to operationalize the partnership. The MOU signified the three countries’ intent to work together to mobilize and support the deployment of private sector investment capital to deliver major new infrastructure projects, enhance digital connectivity and energy infrastructure, and achieve mutual development goals in the Indo-Pacific.

The California Chamber of Commerce is hopeful that the Trump administration will continue to develop the Indo-Pacific Initiative in 2019 and strengthen partnerships within the region.

In 2019, the U.S. Department of Commerce, through its Access Asia Program, plans to dedicate many events to the region, including its 2019 flagship trade mission to connect U.S. firms with the Indo-Pacific market.

Also in the lead up to the 2019 G-20 Summit in Osaka, the Trilateral Partnership for Infrastructure Investment in the Indo-Pacific intends to work with the other members of the G-20 to promote quality infrastructure development in the region.

The Indo-Pacific region represents nearly half of the earth’s population, one-third of global gross domestic product (GDP) and roughly 50% of international trade. The large and growing markets of the Indo-Pacific already are key destinations for U.S. manufactured goods, agricultural products, and services suppliers.

Following the U.S. withdrawal from the Trans-Pacific Partnership, a highlighted Indo-Pacific Vision is welcomed, as this is a key area in geopolitical, strategic, and commercial terms.

Exports of California-Made Products Up, Re-Exports Fall by 20% 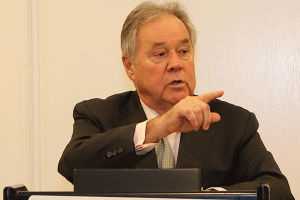