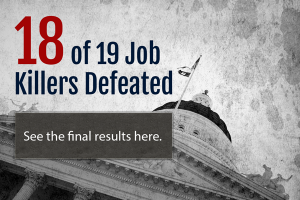 Click on the bill numbers below for more information.

SB 3 (Leno; D-San Francisco/ Leyva; D-Chino) Automatic Minimum Wage Increase — Unfairly increases employers’ costs while ignoring the economic factors or other costs of employers by increasing the minimum wage by $3.00 over the next two and a half years with automatic increases tied to inflation. Held on Assembly Appropriations Committee Suspense File 08/19/15. Failed deadline.

SB 406 (Jackson; D–Santa Barbara) Significant Expansion of California Family Rights Act — Increases costs, risk of litigation and creates less conformity with federal law by expanding the family members for whom leave may be taken, which will provide a potential 24-week protected leave of absence for employers to administer. Vetoed 10/11/15.

SB 350​ (de León; D-Los Angeles) Costly and Burdensome Regulations — Before amendments, potentially increased costs and burdens on all Californians by mandating an arbitrary and unrealistic reduction of petroleum use by 50%, increasing the current Renewable Portfolio Standard to 50% and increasing energy efficiency in buildings by 50% — all by 2030 without regard to the impact on individuals, jobs and the economy. Opposition and job killer status removed due to September 11, 2015 amendments.  Signed 10/07/15—Chapter 547, Statutes of 2015.

SB 684 (Hancock; D-Berkeley) Increased Tax Rate — Threatens to significantly increase the corporate tax rate on publicly held corporations and financial institutions up to 15% according to the wages paid to employees in the United States, and threatens to increase that rate by 50% thereafter, if the corporation or institution reduces its workforce in the United States and simultaneously increases its contractors. Senate Governance and Finance Committee 03/19/15.

SCA 5 (Hancock; D-Berkeley)/(Mitchell; D-Los Angeles) Split Roll — Undermines the protections of Proposition 13 by unfairly targeting commercial property owners and increasing their property taxes by assessing their property based upon current fair market value instead of acquired value. Such costs will ultimately be passed on to consumers and tenants through higher prices and will result in job loss as businesses struggle to absorb such a dramatic tax increase. Senate Governance and Finance Committee 07/16/15.

AB 359 (Gonzalez; D-San Diego) Costly Employee Retention Mandate — Inappropriately interferes with and alters the employment relationship by mandating that a successor grocery employer retain the employees of the former grocery employer for 90 days, potentially under the terms of a collective bargaining agreement to which the successor employee was not a party, and then forces the successor employer to consider offering continued employment to such employees beyond the 90 days unless the employee’s performance was unsatisfactory. Signed 08/17/15— Chapter 212, Statutes of 2015.

SB 576 (Leno; D-San Francisco) Stifles Mobile Application Technology Development — Stifles innovation and growth in the mobile application economy and creates unnecessary and costly litigation by mandating unnecessary, redundant and impractical requirements that will leave many current and future mobile applications unusable, with no benefit to the consumer. In the Senate Business, Professions and Economic Development Committee, 03/12/15. Failed deadline.

AB 244​ (Eggman; D-Stockton) Private Right of Action Exposure — Jeopardizes access to credit for home mortgages, increasing the challenge to attract business to California because of high housing prices, by extending the homeowner’s bill of rights to others, thereby opening the door to more private rights of action. In the Assembly Banking and Finance Committee, 02/17/15. Failed deadline. ​