Ukraine has a population of approximately 44.38 million and is the second largest country in Europe by land mass. In 2019, Ukraine’s GDP was $153.7 billion. In 1991 when the Soviet Union dissolved, Ukraine became independent. Ukraine has been a member of the World Trade Organization (WTO) since 2008, and has since been working toward attracting foreign investment. (The World Bank) 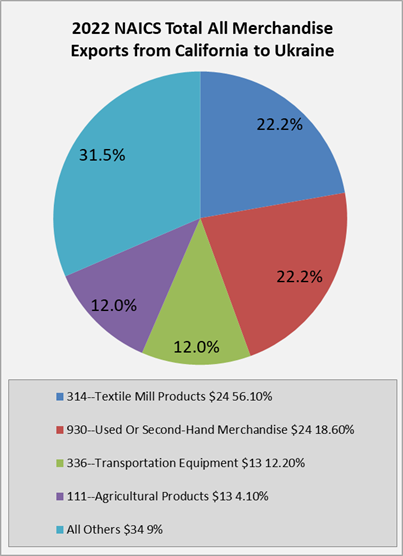 In 2020, Ukraine was California’s 51st largest export destination with $232 million in exports. California is among the top 10 state exporters to Ukraine. Used or secondhand merchandise accounted for 56.1% of exports, followed by agricultural products accounted with 18.6 percent, and transportation equipment which accounted for 12.2 percent. California imported $78.49 million from Ukraine in 2020, which included food manufactures, electrical equipment, non-electrical machinery, and primary metal manufactures.

In 2008, shortly after Ukraine became a member of the WTO, the U.S. and Ukraine signed a TICA, which established the U.S.-Ukrainian Trade and Investment Council. Chaired by the USTR and the Ukrainian Ministry of Economy, the council is the primary organization for managing the trade and investment relationship between the two countries. The fourth meeting of the U.S.-Ukraine TIC was held in Washington on July 31, 2012.

Example signatures and stamps of the Ukrainian Chamber of Commerce and Industry who are authorized to authenticate certificates.

Crimea is a well developed region in Ukraine, located along the northern peninsula on the Black Sea. It is also known as a “Pearl of Ukraine.” It has been ranked by National Geographic as being one of the Top 20 Destinations in 2013.

The region of Crimea has a new campaign for promotion and attraction of investment, with an overall goal of improving the lives of the population of 2 million. The campaign will be focused on five areas:

Source: Council of Ministers of the Autonomous Republic of Crimea

The Cherkasy province of Ukraine (Cherkasy Oblast) is located in the center of the country, along the Dnieper River. It has a population of 1.3 million people, with 56.4% of residents dwelling in urban areas and 46.6% in rural areas.

Cherkasy region does business with 117 countries, and at the end of 2012 attracted $884 billion in foreign investments. With a favorable investment climate, central location, and abundant natural resources, the region has significant potential.

November 12, 2013 – The California Chamber of Commerce hosted an official delegation from the Republic of Crimea, Ukraine. The meeting focused on the cultural, historical and commercial significance of Crimea –which is a well-developed region in Ukraine, located along the northern peninsula on the Black Sea.