With a population of 273.52 million, Indonesia is the fourth most populous country in the world and represents a sizable consumer market. According to the most recent figures, Indonesia has a gross domestic product (GDP) of $1.058 trillion, making it the 16th largest economy in the world. (International Monetary Fund, World Bank)

The Indonesian government plays a significant role in Indonesia’s market economy in which it owns over 160 enterprises and sets prices for several goods such as electricity, rice and fuel. Indonesia has the largest economy in Southeast Asia and is a member of both the G20 and APEC (Asia-Pacific Economic Cooperation).

In addition, investment from both foreign and domestic sources has supported the Indonesian economy. Due to its recent economic growth and sound fiscal policies, Indonesia’s debt to GDP ratio has steadily declined.

Trade has been expanding swiftly between the United States and Indonesia in the last several years. Exports to Indonesia totaled $9.479 billion in 2021 The main export categories are oil and gas, chemicals, agricultural products and processed foods. Imports from Indonesia totaled $27.07 billion in 2021. Top imports included apparel and accessories, processed foods, leather and allied products, miscellaneous manufactured commodities, and computer and electronic products.

US FDI total stock into Indonesia totaled $18.715 billion in 2020, and Indonesian FDI into the US totaled $837 million in the same year (Bureau of Economic Analysis). Indonesian FDI in the US supported over 500 jobs and contributed $132.4 million. Majority Asian and Pacific owned firms contributed $15.8 billion to research and development and another $116 billion to expanding US exports. The top industry sectors for Indonesian FDI were: food and beverages, aerospace, software and IT services, rubber, and plastics. Select USA

California exported approximately $656 million to Indonesia in 202`. The largest export category from California was processed food totaling $236 million. Other top exports include waste and scrap, chemicals, and computer and electronic products totaling $96 million, $ 88 million, $61 million of all export commodities respectively.​ Imports from Indonesia to California totaled $6.9 billion in 2021, the highest in the last decade. Top imports were apparel and accessories, miscellaneous manufactured commodities, computer and electronic products, and leather and allied products.

U.S.-Indonesia Commercial Dialogue Steering Committee and project presenters
October 2012
On the sidelines of the Indonesian Investment day in New York City, the U.S. Chamber of Commerce in coordination with the U.S. Department of Commerce, US-ASEAN Business Council and AmCham Indonesia hosted the Indonesian Coordinating Ministry for Economic Affairs (MENKO) and members of KADIN (the Indonesian Chamber of Commerce and Industry) and APINDO for the biannual U.S. – Indonesia Commercial Dialogue (CD) plenary meeting. Click here to view the list of meeting participants

The CD is a public sector-private sector dialogue on commercial cooperation between the United States and Indonesia that was launched on November 11, 2011 at the Hawaii APEC CEO Summit. The CD is open to all U.S. and Indonesian private sector companies interested in developing projects to enhance the U.S. – Indonesia relationship in the following six Commercial Dialogue areas of focus:

Investment climate
Clean energy
Trade Expansion
Entrepreneurship
Small and Medium Enterprises
Industrial Cooperation
During the plenary meeting, seven project proposals were presented and discussed as possible CD initiatives. The U.S. Chamber of Commerce presented a proposal on developing and implementing good regulatory practices for growth. Please find a copy of the proposal here. Our goal is to develop this proposal and improve the business interaction with the Indonesian government on standard setting policies.

Indonesia is actively involved with Asia-Pacific Economic Cooperation (APEC). APEC was formed in 1989. It serves as a multilateral forum in which Asian and Pacific economies can solve economic problems and cooperate in developing key economic sectors.

Collectively, the 21 economies of APEC, which touch the Pacific Ocean, represent a large consumer market— nearly half the world’s population, nearly half of all world trade and more than $31 trillion in economic output. 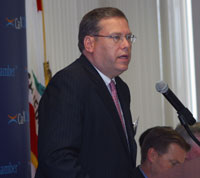