Our group headed north, leaving Seattle for a beautiful drive to Canada. As we neared the border there were signs posting the border crossing wait times. There was also a sign reminding us of the change to the metric system. Our first stop on the tour was the Douglas (Peace Arch) vehicle port of entry, connecting U.S. I-5 highway to Canada.

This port of entry is open 24 hours a day, 7 days a week, making it one of the busiest land border crossings for traveler vehicles in Canada. The port of entry has 9 traffic lanes made up of 7 traveler lanes, 1 flex lane for travelers/NEXUS and 1 dedicated NEXUS lane. The NEXUS trusted traveler program had its origin here. Individuals pay $50 and must be approved by both the Canadian and U.S. governments to join the one million members. The average processing time per vehicle with NEXUS is 10 seconds; otherwise it is 45–50 seconds before determining to release or refer. The real difference for NEXUS is the shorter wait time in line.

The main attraction of the Douglas Port of Entry is the Peace Arch that connects the U.S. and Canada. The Peace Arch was built in 1921 to commemorate the signing of the Treaty of Ghent in 1814, which marked the end of the War of 1812 and the beginning of peaceful relations between the U.S. and Britain. The park surrounding the monument is considered an international park, where visitors are not required to have a passport or a visa within its boundaries. One fun fact about the Peace Arch is that it is considered one of the first earthquake-resistant structures built in North America.

While at the Douglas Border Crossing we received presentations from the Canada Border Services Agency (CBSA), the U.S. Customs & Border Protection (CBP) and the Royal Canadian Mounted Police.

The CBSA is responsible for providing integrated border services that support Canadian national security and public safety, while facilitating the free flow of legitimate persons and goods. The CBSA looks for drugs, firearms, animals, children at risk, and terrorism-related issues. There are camera and license plate readers in every lane. The dynamics of the vehicle border crossings change with the value of the U.S. and Canadian dollar, as it relates to shopping opportunities, and even the value of the lottery/power ball.

Similarly, the U.S. CBP has a similar mission of safeguarding America’s borders to protect the public from dangerous people and materials, while enhancing the nation’s global economic competitiveness by enabling legitimate trade and travel.

A highlight, as always, was meeting with the Royal Canadian Mounted Police (RCMP). The Mounties are unique in that they are a policing body on the national, federal, provincial, and municipal levels. They specifically informed us of the Pacific ShipRider Program, which is a joint effort by the RCMP and the U.S. Coast Guard.

In addition, we learned about the Beyond the Border Program with the U.S. and Canada working together toward Perimeter Security, and the International Mobility and Trade Corridor Program supporting the Cascade Gateway connecting Western Washington and lower British Columbia. 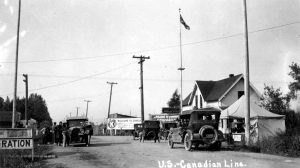 Getting its name from the Pacific Coast Highway on which it is located, the crossing became a preferred route in 1923 when it was paved. The port of entry, also open 24 hours a day, 7 days a week now features 18 traffic lanes, including 10 traveler lanes, 3 commercial lanes, 3 bus-only lanes, 1 NEXUS lane, and 1 trusted trader lane. The Pacific Highway is among the busiest ports of entry between the U.S. and Canada.

The bus crossings are separated from other vehicles. Passengers unload and go through an airport-like screening process and then reboard the bus. Depending on the type of passengers — i.e. school bus, casino goers, shoppers, Greyhound — the processing time varies, but generally takes 20–40 minutes.

We then toured the commercial truck crossing. Three lanes are available, including the FAST lane designed for trusted customers, assisting in efficiency. Our group witnessed a demonstration of the canine unit with a very sweet Labrador Retriever trained in the Passive Alert method. The handler, who also has the dog full-time, demonstrated the dog’s talent in locating drugs in a shipment that had just come into the crossing. The dog sat down next to the specific package. The dogs are trained to recognize agricultural products, currency over $10,000 and eight types of drugs. The training process begins at about age one and can take 5–10 weeks. Beagles generally are used at airports, while retrievers generally are used in commercial settings. The dogs have a mandatory retirement at 10 years of age and then the handler is offered the dog. Lastly, we went inside the very large commercial X-ray machine designed for trucks to drive through during a one-minute process. The driver separately waits while the scan is in progress. This is the first permanent X-ray machine in Canada, compared to the more common mobile X-ray machine.

Our next stop was to visit the Port of Vancouver Deltaport Terminal. The Deltaport is Canada’s flagship container terminal, a 210-acre facility with three contiguous berths. The terminal was designed to handle the largest transpacific container vessels in service featuring a first-in-the-Americas dual-hoist gantry crane. The terminal uses state-of-the-art technology and an on-dock intermodal rail yard with 8 tracks. Here we saw a demonstration of the mobile X-ray scan, which is on a vehicle and can scan a container in just a minute.

Following, we received a tour of the neighboring Westshore Terminal, Canada’s busiest coal export terminal, which provides billions of dollars in export revenue for Canada and British Columbia. Westshore Terminal has been running for 45 years and is North America’s premier mover of coal, shipping to more than 20 countries around the world. The biggest markets are Japan and Korea.

Trains bring the coal into the terminal. The coal from the U.S. is usually thermal and for power plants. The Canadian coal usually is metallurgical and for steel. The U.S. trains generally have 126 cars, while the Canadian trains generally have 152 cars. They then go through a process whereby each train is literally turned over with the coal being dumped. There were numerous piles of coal waiting to be exported.

After the tour of the terminals, we ventured back into the city of Vancouver, where we had a second to rest at our hotel. The Sutton Place Hotel Vancouver was situated in the heart of downtown with Vancouver elegance and European charm.

Vancouver is a bustling coastal seaport city located on the southwest coast of Canada in British Colombia. The city is surrounded on three sides by water. This moderate oceanic climate makes it one of the warmest cities in Canada. It is the most populous city in the province with a population of 2.463 million in the Greater Vancouver area, which makes it the third largest metropolitan area in Canada. Vancouver is one of the most ethnically and linguistically diverse cities in Canada, with 52% of the population speaking a first language other than English (City of Vancouver). Vancouver has been host to many international conferences and events, including the 2010 Winter Olympic Games. Vancouver, in addition to its shipping industry, has also become a hot spot for film production, earning itself the nickname “Hollywood North.” Vancouver truly is a global city, landing itself among the top ranking cities in the world for livability and quality of life, according to various outlets.

Following a quick dinner, we walked to the Vancouver headquarters of Microsoft, which currently employs 600 with a goal of 750. We received a tour of the office, which is new since February. Here the focus is on Windows 365, Skype, and perfecting 3D for PowerPoint. The office was open concept with desk areas arranged by teams. There were conference rooms available with guitar pick-shaped tables at standing height. There were white boards all over the walls. New studies indicate that creativity flows from the human body, including the fingers and hands, so writing and then scanning digitally is encouraged. Microsoft Vancouver.