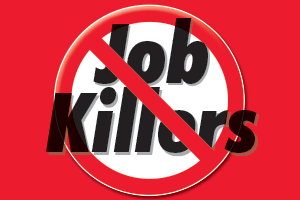 The California Chamber of Commerce has identified the bills below as job killers that would have a negative impact on California’s economy if they become law.

Sample letters to legislators are available at www.calchambervotes.com.

SB 224 (Jackson; D-Santa Barbara) Barrier to Housing and Economic Development — Creates significant uncertainty for developers by requiring the Office of Planning and Research (OPR) to amend the California Environmental Quality Act (CEQA) Guidelines to redefine the baseline that may be used in the CEQA analysis and directing OPR, in drafting the Guidelines, to limit consideration of modifications to the environment at the project site caused by illegal, unpermitted, or emergency activities within the baseline conditions.  If prior illegal, unpermitted, or emergency activities are excluded in a project’s baseline, it may require projects to mitigate not only the impacts of the project itself, but also the impacts of other historical activities for which the applicant has no legal liability and over which it had no control.  Held in Senate Appropriations Committee, 5/25/17.

SB 33 (Dodd; D-Napa) Discrimination Against Arbitration Agreements — Unfairly discriminates against arbitration agreements contained in consumer contracts for goods or services with a financial institution, which is likely preempted by the Federal Arbitration Act and will lead to confusion and unnecessary litigation. Signed. Chapter 480, Statutes of 2017.

SB 538 (Monning; D-Carmel) Arbitration Discrimination — Unfairly and unlawfully discriminates against arbitration agreements by restricting the formation of antitrust arbitration agreements in hospital contracts, leading to costly litigation over preemption by the Federal Arbitration Act. Assembly Health Committee, 7/14/17. SB 538 was never brought up for a hearing in the Assembly Health Committee, missing the deadline to advance this year

AB 127 (Committee on Budget) Threatens Energy Reliability — Threatens energy reliability and will lead to the elimination of jobs by mandating the closure of the Aliso Canyon natural gas storage facility.  Held on Senate Floor. No vote taken, 9/15/17.

SB 774 (Leyva; D-Chino) Increased Permitting Fees and Delayed Permitting — Exposes permittees to unknown, increased fees by providing the Department of Toxic Substances Control (DTSC) a blank check to impose additional fees on permittees to implement and perform its statutory requirements when its primary sources of funding have structural deficits and creates substantial uncertainty and delay of facility permitting by interjecting a new board to oversee and approve permits. Assembly Floor inactive file, 9/15/17.

AB 421 (Santiago; D-Los Angeles) Extends Superfund Liability to Emissions into the Air — Imposes statutory liability on businesses and individuals for clean-up recovery costs associated with deposits or redeposits of certain substances that were emitted into the air under a statutory scheme that places the burden of proof on the defendant. Failed deadline; Assembly Judiciary Committee, 4/28/17.

AB 1645 (Muratsuchi; D-Torrance) Gas Price Increase — Jeopardizes the production of California-based fuel by banning the use of hydrogen fluoride and hydrofluoric acid at refineries that use more than 250 gallons and are located within two miles of a residence, notwithstanding the fact that there are significant safety regulations in place at the local, state and federal levels. Failed deadline; Assembly Environmental Safety and Toxic Materials Committee, 4/28/17.

AB 5 (Gonzalez Fletcher; D-San Diego and Kalra; D-San Jose) Unfair Scheduling Mandate — Burdens small and large employers with a scheduling mandate that requires employers to offer additional hours of work to employees before hiring a new employee or contractor and exposes employers to multiple threats of costly litigation for technical violations that do not cause an employee any harm. Held in Assembly Appropriations Committee; 5/26/17.

AB 1209 (Gonzalez Fletcher; D-San Diego) Public Shaming of Employers — Imposes new data collection mandate on California employers to collect and report data to the Secretary of State regarding the difference in mean and median salaries of men and women in the same job title and job description, determine which employees perform “substantially similar” work, and then have that report posted on a publicly accessible website, where such employers will receive undue scrutiny and criticism for wage disparity that is not unlawful and justified by a bona fide factor. Vetoed.

SB 63 (Jackson; D-Santa Barbara) Imposes New Maternity and Paternity Leave Mandate — Unduly burdens and increases costs of small employers with as few as 20 employees by requiring 12 weeks of protected employee leave for child bonding and exposes them to the threat of costly litigation. Signed, Chapter 686, Statutes of 2017.

AB 1576 (Levine; D- San Rafael) Gender Pricing Mandate — Unfairly exposes companies to costly, frivolous litigation with an automatic $4,000 in statutory damages for alleged gender pricing discrimination based upon different consumer prices for female versus male products that businesses will be forced to settle to avoid costs or spend significant legal fees demonstrating those differences are based upon objective, non-gender related specific factors. Held on the Assembly Floor.

AB 43 (Thurmond; D-Richmond) Targeted Tax on Contractors — Unfairly targets one category of taxpayers to fund a benefit for all of the state by imposing a tax on contractors for the privilege of doing business with the Department of Corrections and Rehabilitation, and requires the contractor to absorb the cost while maintaining a price of lowest responsible bidder.  Held on the Assembly Appropriations Committee Suspense File, 5/26/17.

AB 479 (Gonzalez Fletcher: D-San Diego and C. Garcia; D-Bell Gardens) Targeted Tax on Alcohol — Unfairly imposes an additional targeted excise tax on manufacturers, importers, and wholesalers of distilled spirits and a floor tax, that will increase their costs and force them to reduce in other areas, including labor. Failed passage in Assembly Revenue and Taxation Committee, 5/8/17.

AB 1003 (Bloom; D-Santa Monica) Targeted Tax on Sweetened Beverages — Unfairly imposes a targeted excise tax on distributors of sweetened beverages to fund health-related programs for all, which will force distributors to reduce costs through higher prices to consumers or limiting their workforce. Assembly Rules Committee, 4/26/17.

AB 1356 (Eggman; D-Stockton) Targeted Tax on High Earners — Unfairly increases the personal income tax rate to 14.3%, the highest in the country, on one category of taxpayers (including sole proprietors), who already pay over half of the income tax revenue to the general fund, forcing them to mitigate costs through means including reducing workforce, in order to fund higher education that will benefit all of California. Assembly Higher Education Committee, 3/30/17.

AB 1512 (McCarty; D-Sacramento) Targeted Tax on Opioids — Unfairly imposes an excise tax on opioid distributors in California, which will increase their costs and force them to adopt measures that include reducing workforce and increasing drug prices for ill patients who need these medications the most, in order to fund drug prevention and rehabilitation programs that will benefit all of California. Assembly Revenue and Taxation Committee, 5/19/17.

ACA 4 (Aguiar-Curry; D-Winters) Lowers Vote Requirement for New Tax Increases — Adds complexity and uncertainty to the current tax structure and pressure to increase taxes on real property by giving local governments new authority to enact special taxes, including parcel taxes, to fund construction, reconstruction, rehabilitation, or replacement of public infrastructure or affordable housing, or the acquisition or lease of real property for public infrastructure or affordable housing, and lowering the vote threshold to impose such new taxes from two-thirds to 55%. Assembly Local Government Committee, 4/24/17.

SB 567 (Lara; D-Bell Gardens) Multiple Tax Increases on California Employers — Proposes multiple tax increases on California employers, including requiring payment of capital gains on the inheritance of a family business as well as eliminating a deduction for corporations with regard to CEO compensation, when California already has the highest personal income tax and sales tax rates in the country, as well as one of the highest corporate tax rates, which will discourage job growth in California. Senate Floor; Inactive File, 6/1/17.

Two previously identified job killers were amended and the job killer status was removed, as noted below:

In addition,  CalChamber identified a bill reducing rental housing supply, AB 1506 (Bloom; D-Santa Monica), as a job killer; however, in a recent Los Angeles Times article, the bill’s author said he would not seek a vote on the bill this year.