Mexico at a Glance 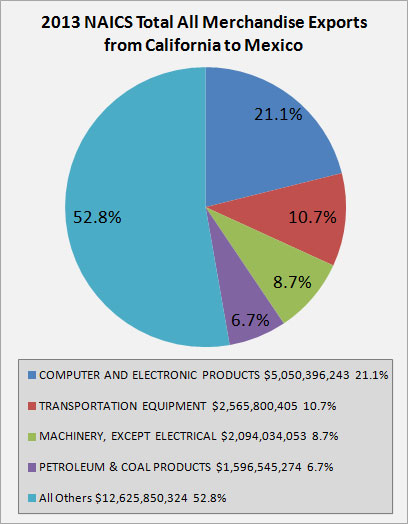 Source: US Department of Commerce

Mexico’s $1.3 trillion economy has become increasingly oriented toward manufacturing in the 20 years since the North American Free Trade Agreement (NAFTA) entered into force, according to figures from the Central Intelligence Agency.

Two-way trade in goods between Mexico and the United States increased dramatically from $81.4 billion in 1993 to more than $506.6 billion in 2013. Mexico has remained the United States’ second-largest export market since 1995, with a total value of $226.2 billion in 2013, and is the third-largest source of imports. Top export categories from the U.S. to Mexico included computer and electronic products, transportation equipment, chemicals, and nonelectrical machinery.

The historic agreement, after passing through both the U.S. House of Representatives and the U.S. Senate, was signed into law by President Bill Clinton on December 8, 1993, and took effect on January 1, 1994. The objectives of NAFTA are to eliminate barriers to trade, promote conditions of fair competition, increase investment opportunities, provide adequate protection of intellectual property rights, establish effective procedures for implementing and applying the agreements and resolving disputes, and to further trilateral, regional and multilateral cooperation.

According to the most recent figures from the Bureau of Economic Analysis, the U.S. invested more than $101 billion into Mexico, while Mexican investment in the U.S. reached nearly $15 billion.

Mexico has free trade agreements with more 50 countries, including Guatemala, Honduras, El Salvador, the European Free Trade Area, and Japan—putting more than 90% of trade under free trade agreements. In 2012 Mexico formally joined the Trans-Pacific Partnership negotiations and formed the Pacific Alliance with Peru, Colombia and Chile.

In 2013, agriculture accounted for 3.6% of Mexico’s gross domestic product (GDP). While this is a small percentage of its GDP, agriculture nevertheless is an important part of Mexico’s economy, helping raise wages and living standards.

Mexico’s wide variety of geological features and climates have allowed it to produce more than 350 distinct farm products each year. The majority of exports are fresh fruits and vegetables, which totaled $7.5 billion in 2012, representing 68.8% of all Mexican agriculture products sold abroad that year. In particuluar, Mexico is an important source of winter vegetables for the United States and Canada.

More than 7 million travelers from Mexico visited California in 2012, with air travel accounting for 504,000 travelers, according to Visit California. These 504,000 visitors contributed $498 million to California’s economy, and projections from the CIC Research Office of Travel and Tourism Industries estimate that in 2013 California will see a 4.1% increase in Mexican visitors, who will spend approximately $535 million in the state.

The top regions visitors from Mexico are interested in visiting, according to Visit California, are: San Francisco Bay Area (No. 1), San Diego County (No. 2) and Los Angeles County (No. 3). The top five attractions are: 1. Disneyland; 2. San Francisco; 3. Hollywood; 4. Los Angeles; and 5. Napa Valley/Wineries.