The UAE enjoys a high per capita income and an open economy with a substantial trade surplus. Oil was discovered in the UAE in the 1950s and Abu Dhabi was one of the first emirates to begin exporting oil. Since the discovery and export of oil, the UAE has transformed into an economy with a high standard of living. The UAE has been a member of the WTO since 1996 and a member of Gatt since 1994. The UAE has a population of approximately 9.7 million and a GDP of $421 billion. (CIA Factbook, World Bank) 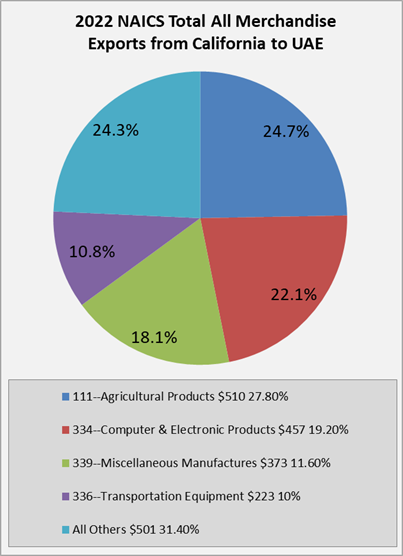 Two-way trade between the United States and the UAE was approximately $17.82 billion in 2020. The United States exported $14.75 billion to the UAE in 2020. Exports consisted of $3.59 billion in computer and electronic products, $3.275 billion in transportation equipment, $1.197 billion in non-electrical machinery, and $1 billion in chemicals. Imports from the UAE were over $3.07 billion, with the top categories being primary metal manufacturing, reimports, and petroleum and coal products.

US FDI in the UAE totaled $17.15 billion in 2019, and UAE FDI into the US totaled $27.63 billion in the same year (Bureau of Economic Analysis). UAE FDI contributed to 12,100 jobs in the U.S. $1.6 billion of the UAE’s FDI was invested in research and development, and another $633 million went to expanding U.S. exports. The top industry sectors for UAE FDI were: financial services, transportation, food and beverages, aerospace, business services, and real estate (Select USA).

(Per the Dubai Chamber and the Federation of Israeli Chambers Joint Partnership, 2020) The “Abraham Accords” created a historic opportunity for Bi –literal cooperation between the countries, which led to the signing of a strategic partnership agreement between the Dubai Chamber of Commerce and The Federation of Israeli Chambers of Commerce, early this September. Under the agreement, the parties open up to the business sectors in both countries in order to increase and expand business connections, promote mutual trade and encourage investments.