Egypt spans the northeast corner of Africa and is considered a Mediterranean country. Egypt is considered a cradle of civilization, as it’s able to trace its history back longer than any other country. Islam is the official religion of Egypt and Arabic the official language, although there is a significant Christian minority in the country. The population of Egypt is 98.4 million, making it the most populous country in North Africa, the Middle East, and the Arab world, and the third most populous in Africa. The Sahara Desert makes up large regions of Egyptian land

Egyptian GDP was $303.09 billion in 2019. It’s economy is the third largest in Africa and one of the largest and most diversified in the Middle East. U.S. foreign direct investment (FDI) into Egypt totaled $11 billion in 2019. The same year, Egyptian FDI into the U.S. totaled $17 million (Bureau of Economic Analysis). 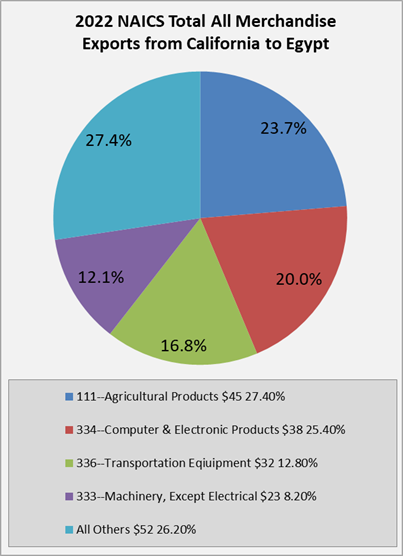 U.S. exports to Egypt in 2020 totaled $4.7 billion. 34.6% of the total constituted $1.6 billion worth of agricultural products while 17% and 11.9% represented $811 million of transportation equipment and $564 million of chemicals, respectively.

The U.S.’s imports from Egypt were $2.17 billion, 36% of which was made up by apparel manufacturing products which totaled $784 million. This was followed by petroleum and coal products and food manufactures which made 19.6% and 7.9% of the total.(U.S. Department of Commerce).

Imports from Egypt to California totaled $142 million in 2020. 49.1% of which was apparel manufacturing products which totaled $69.7 million. The next largest was food manufactures making up 30.5% of the total and $43.3 million.(U.S. Department of Commerce).