Thailand is located in the lush lower Mekong river sub Basin of South East Asia with an estimated standing population of over 69.6 million people.

The United States imported approximately $37.59 billion from Thailand in 2020, with computer and electronic products accounting for over 38%. This was the largest number of imports over the past decade. That same year, the U.S. exported $11.16 billion. 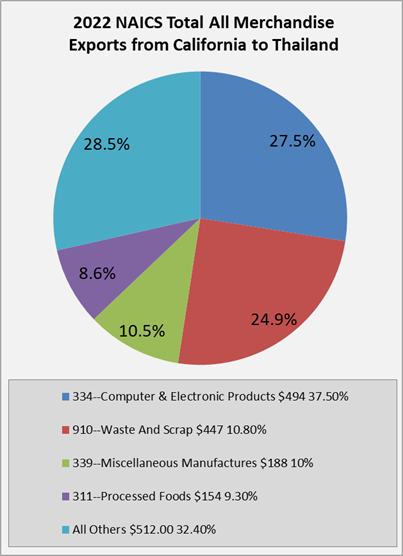 Thai FDI in the US totaled $1.68 billion in 2019, while US FDI in Thailand totaled $17.7 billion. Thai FDI was the second fastest-growing source of FDI in the U.S. in 2019. Thai FDI supported 3,500 jobs in the US. Thai investments contributed $101 million towards expanding US exports in 2018. The top industry sectors for Thai FDI in the US are: plastics, chemicals, food and beverages, auto components, software and IT services, and building materials. Select USA

According to the Thai American Chamber of Commerce in California, California is home to some 200,000 Thais, the largest Thai population outside of Thailand.

California is home to many Thai businesses, among them Thai Airways, Kasikorn Bank (Thailand’s second largest commercial bank), Krung Thai Bank and Chang Beer. Apart from the influence of these larger companies, aspects of Thai culture have found niche markets in America, from Spa and Massage services; Buddhist influenced beauty and health programs, and Thai boxing clubs. However, perhaps most famous in California is their food business. Los Angeles alone is home to about 700 Thai restaurants

Thai Town
Los Angeles is home to the only Thai Town in the world, having occupied a section of East Hollywood since 1999. Thai town is operated by the Thai Community Development Center, a non-profit organization created in 1994 with the expressed goals of creating “a thriving community by creating businesses and jobs, developing decent and affordable housing, and revitalizing public space”.
THAI Town in Los Angeles

Thailand is a member of several multi-lateral organizations which have increased Thailand’s presence both in the region and globally. They are currently a member of the Association of South East Asian Nations (ASEAN), Asia Pacific Economic Cooperation (APEC), the World Trade Organization (WTO), The Mekong River Commission, and the Greater Mekong Sub Region (an IGO created through the Asian Development Bank).

Through these organizations and bi-lateral relations with the United States, there has been increased development in Thailand’s infrastructure, as well as environmental impact analysis and studies for continued economic growth. The United States also pledged $187 million for the Lower Mekong Initiative, which “has the stated aim of improving education, health, infrastructure, and the environment in the region”. (Lee, John. “China’s Water Grab.” Foreign Policy)

The initiative was negotiated by U.S. Secretary of State Hilary Clinton, and the foreign ministers of Cambodia, Laos, Thailand, and Vietnam. U.S. State Department

(May 22, 2012) A delegation, consisting of representatives of the Thai government and members of the Thai American Chamber of Commerce in California visited the CalChamber offices to discuss trade promotion.