Two-way trade between the United States and Switzerland was approximately $92.7 billion in 2020. The United States exported over $18 billion to Switzerland, making it the 18th largest export destination for the US. Exports consisted of $7.2 billion in primary metal manufacturing, $3.21 billion in chemicals and approximately $2.5 billion in manufactured commodities. Imports from Switzerland were $74.78 billion, with the top categories being primary metals, chemicals, reimports, and computer/electronic products. (US Department of Commerce)

According to the Swiss Embassy in the United States, Switzerland is one of the largest investors in R&D in the US, with more than $9.6 billion invested in 2018. In 2019, the U.S. invested $228.9 billion into Switzerland, while Swiss investment in the U.S. reached $224.3 billion. Switzerland is the 8th largest source of FDI in the US in 2019. In 2018, Swiss FDI in the US supported 478,500 jobs and contributed $15.5 billion to expanding US exports. The top industry sectors for Swiss FDI in the US are: real estate, industrial equipment, software and IT services, financial services, food and beverages, and business services. (Select USA) 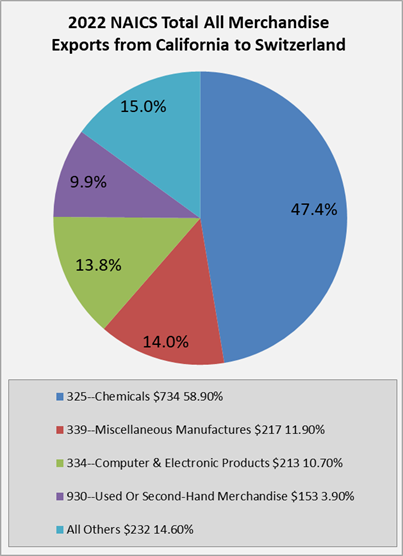 In California, Switzerland became the fifth largest source of FDI through foreign-owned enterprises (FOEs), up from the fifth spot in 2019. In 2020, Swiss FOEs in California provided over 54,558 jobs through 725 firms amounting to $5.49 billion in wages. The top jobs by sector are: manufacturing, financial activities, professional/business services, wholesale trade, and retail trade (World Trade Center Los Angeles FDI Report, June 2021).

We Need a Free Trade Deal with Switzerland
The Heritage Foundation, August 8, 2018