Over the past two decades, South Africa’s post-apartheid government has made remarkable progress.  South Africa is the second or third largest economy in Africa, in competition with Egypt. Their GDP totaled $335.44 billion in 2020. Their peaceful transition to democracy, priorities given to economic growth and dedication to human rights allowed South Africa to host the 2010 FIFA World Cup, which solidified their place on the world stage.
(US Department of State and World Trade Organization)

South Africa is the 42nd largest export destination with the United States, with exports more than doubling over the past decade.

California exported over $281 million to South Africa in 2021, making it the state’s 48th largest export destination. Computers and electronic equipment accounted for $81 million of this total. (US Department of Commerce)

A U.S.-SACU Free Trade Agreement would have built on the African Growth and Opportunity Act (AGOA) of 2000. The California Chamber of Commerce supported the AGOA, which President Bill Clinton signed on May 19, 2000 as part of The Trade and Development Act of 2000.

The African Growth and Opportunity Act (AGOA), extended to 2015, initially was enacted in 2000, eliminating duties on imports from African nations into the United States if those nations made significant efforts to open their economies.

Since its inception, AGOA has helped increase U.S. two-way trade with sub-Saharan Africa. In 2013, U.S. exports with the AGOA nations totaled over $22.8 billion, more than triple the amount in 2001. U.S. total imports from sub-Saharan Africa nearly doubled during this period to $38.1 billion.

“Behind the billions of dollars in exports generated by AGOA, are hundreds of thousands of new jobs that have helped African men and especially women to support their families in ways that once seemed impossible. Countless African workers whose jobs depend on AGOA are now able to purchase goods and services that were previously beyond their means…By providing new market opportunities for African exports, especially of non-traditional and value-added products, AGOA has helped African firms become more competitive both in the United States and internationally.”

The trip was a high-profile opportunity for California to introduce the state, its projects and way of doing business. Since the trade mission in 1995, U.S. exports to South Africa have nearly doubled.

For more articles and photos from the trade mission, please see the
October 20, 1995 Alert edition.

(CalChamber, September 28, 2018) Renewing and furthering South Africa’s trade and investment relationship with California was the emphasis when Consul Talifhani Mbelengwa from the Consulate General of South Africa in Los Angeles stopped by the California Chamber of Commerce this week.

Consul Mbelengwa’s September 26 visit was pleasant and informative as he discussed the current activities and goals of new South African President Cyril Ramaphosa, who was elected in February.

(February 24, 2014) Growing trade and investment between California and South Africa was a topic of discussion earlier this month when the California Chamber of Commerce hosted The Honorable Cyril Sibusiso Ndaba, consul general of South Africa in Los Angeles.

In the last five years, two-way trade between California and South Africa, the largest economy in Africa, has nearly doubled, from $684 million in 2009 to approximately $1.1 billion in 2013.

Joining the discussion with the consul general were Ms. Ezilda Samoville, executive director of the Senate Office of International Relations, and Mrs.Susanne Stirling, CalChamber vice president of international affairs.

He was the deputy high commissioner to the United Kingdom from 2004 to 2010. Before working in Rwanda for four years, Ndaba served as a diplomat in New York from 1995 to 1998.

One of the key strategic goals for the South African Consulate General in Los Angeles is “to stimulate South Africa’s economic growth through trade and investment promotion.” With a growing gross domestic product (GDP) of $384.3 billion, South Africa is well-positioned for foreign investment 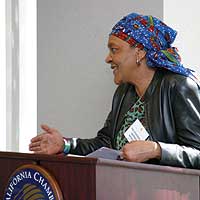 Masekala noted that in the last 10 years she has seen great economic achievements in South Africa due to strong trade partnerships and investment of the international community.