The Kingdom of Saudi Arabia has a population of approximately 34.26 million and is roughly one-fifth the size of the US geographically. It is the largest country in the world without a single river. In 2018 Saudi Arabia had a GDP of $792.96 billion.

As the leading producer of oil and natural gas in the world, Saudi Arabia is largely economically dependent on petroleum output. It holds 16 percent of the world’s petroleum reserves and is the largest exporter of petroleum. (CIA Factbook) 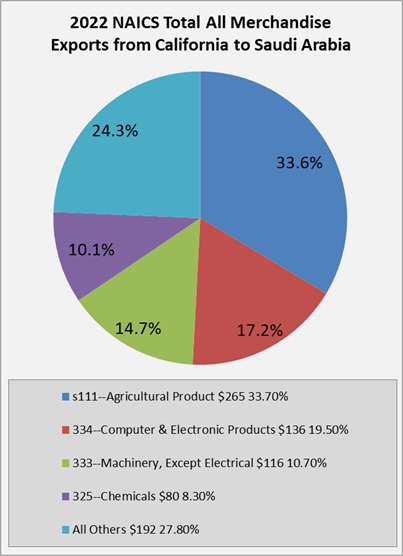 The Kingdom of Saudi Arabia has been a member of the WTO since 2005, and has since been working towards attracting foreign investment. The government recently begun a campaign to build up six “economic cities” in the country to promote the national economy, create more jobs, improve domestic skills, develop the regions and diversify the economy.

Already the largest economy in the region and a key member of the G20, Saudi Arabia is undergoing an extraordinary economic boom. Massive public investment, rapid private-sector growth and new sector initiatives are driving an expansion projected to offer more than $1 trillion in trade and investment opportunities over the next decade.

This recent US-Saudi Forum was held September 16-18 in Los Angeles highlighting the U.S.-Saudi commercial and trade relationship and how U.S. companies can participate in Saudi Arabia’s expansion. Approximately 1,200 American and Saudi businesses, government officials, academics and opinion leaders were in attendance.