Panama is an emerging Central American economy that is shaping to be a beneficial trading partner for California. The U.S. is one of Panama’s most important trading partners, importing almost 50% of Panamanian goods, and U.S. products enjoy a high degree of acceptance in Panama.

Panama has historically served as the crossroads of trade for the Americas.  Its strategic location as a bridge between two oceans and the meeting of two continents has made Panama not only a maritime and air transport hub, but also an international trading, banking, and services center.

Panama’s is enhancing its global and regional prominence through trade liberalization and privatization and it is participating actively in the hemispheric movement toward free trade agreements. Panama’s dollar-based economy offers low inflation in comparison with neighboring countries and zero foreign exchange risk. Its government is stable and democratic and actively seeks foreign investment in all sectors, especially services, tourism and retirement properties (U.S. Department of Commerce).

With a population of 4.24 million and a GDP of $66.8 billion. Roughly 80 percent of Panama’s GDP is created within its services sector. Operation of the Panama Canal, the banking industry, container ports, and medical and health are the largest factors of this service economy. U.S. Department of State 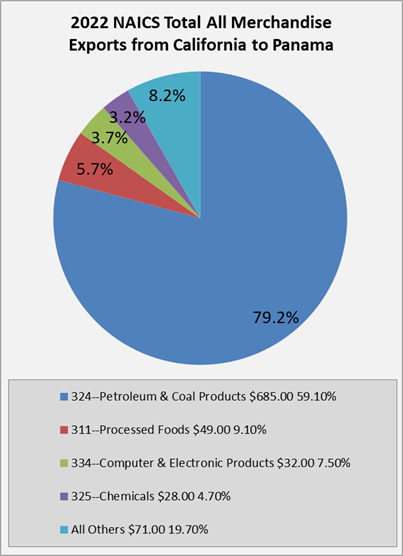 In 2020, the United States exported $5.76 billion to Panama, including petroleum & coal, beverages and tobacco, chemicals, and oil and gas. Panama is currently the U.S.’s 36th export partner. The United States imports $593million from Panama including re-imports, fish, food manufactures, and waste and scrap. U.S. Department of State

The California Chamber of Commerce supported US-Panama Trade Promotion Agreement went into effect on October 31, 2012. The agreement significantly increases the ability of American companies to export their products to one of Latin America’s fastest-growing economies, while dramatically reducing the tariff rates across the range of US industrial and agricultural goods.

In June 2007, the United States and Panama signed a Free Trade Agreement (also referred to as a Trade Promotion Agreement). The Panamanian government approved the FTA in 2007.

Per the U.S. Department of Commerce, International Trade Administration, the U.S.-Panama FTA offers tremendous opportunities for California’s exporters. Panama’s strategic location as a major shipping route and the massive project underway to expand the capacity of the Panama Canal enhance the importance of the U.S.-Panama FTA for California’s exporters.

The Agreement guarantees expanded access for U.S. manufactured and agricultural products, as well as to Panama’s $22 billion services market, including in priority areas such as telecommunications, computer, distribution, express delivery, energy, environmental, and professional services.

The U.S.‐Panama TPA is expected to increase U.S. exports to Panama by removing or reducing trade barriers in the Panamanian market and by leveling the tariff playing field. Ninety‐eight percent of Panama’s exports to the United States entered duty‐free in 2010, while fewer than 40 percent of U.S. goods entered Panama without tariffs.

According to the USTR, Panama will eliminate tariffs on more than 86 percent of U.S. industrial and consumer goods. Almost half of U.S. agricultural goods, which currently face average tariffs of 15 percent, will immediately become duty-free. All tariffs on industrial goods will be eliminated within 10 years, and most of the remaining tariffs on agricultural goods will be eliminated over the next 15 years. Panama is one of the fastest growing economies in Latin America, expanding 10.6 percent in 2011, with forecasts of between five to eight percent annual growth through 2017.

The Trade Agreement is a critical element of the US National Export Initiative (NEI) and strategy to liberalize trade through multilateral, regional and bilateral initiatives. Further, the Agreement will increase momentum toward lowering trade barriers and set a positive example for other small economies in the Western Hemisphere.

(March 26, 2009)The pending U.S.-Panama Free Trade Agreement (FTA) was among the many topics discussed on March 26 when a delegation from Panama, led by Minister of Commerce Cristina Torres, visited the California Chamber of Commerce.